Consorts of Heaven by Jaine Fenn

It is a time of tribulation for Kerin. Discriminated against in her village for the circumstances of her birth, her son Damaru is skytouched and will soon be blessed by being raised to the ranks of the Consorts. Events are complicated by the discovery of an unconscious man in the mere outside the village. As Kerin helps him regain his health, his memory comes back in fits and starts...and indicates that Kerin's world and everything she knows may be a lie. 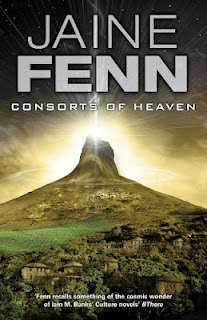 Consorts of Heaven is the second novel in Jaine Fenn's Hidden Empire sequence (which currently stands at four books, with a fifth out this year). It is not a follow-up to Principles of Angels, instead taking place roughly simultaneously with it but in a different part of the galaxy. It can be read independently of the first volume. The first novel was more overtly SF, with a dash of the New Weird added to it, but this second volume is more akin to traditional fantasy. It's set in a much more primitive world where some people have abilities that seem similar to magic.

As with her first novel, Fenn has created an interesting world based on some solid foundations, and seeing how this lines up with what was established in Principles of Angels can be fun. Also, as with her first novel, Fenn undercuts the premise and fascinating backstory with a fairly indifferent prose style. This is made even worse by featuring some considerably less-interesting characters than the first book. The major protagonists - Kerin, the amnesiac Sais and the priest Einon - have potential, but ultimately end up being fairly straightforward and predictable. The commentary on the planet's problems, such as being in the grip of a religious theocracy and its issues with rampant sexism, also disappointingly never rise above the obvious.

There are a few nice touches. A traditional SF mega-structure turns up later on in an interesting guise and, despite the primitive setting, we get a lot more information on how the basics of Fenn's SF universe work (such as how FTL is employed in the setting). But ultimately the novel, whilst certainly not disastrous, is not as engaging as its predecessor.

Consorts of Heaven (***) is available now in the UK and USA.
Posted by Adam Whitehead at 15:20