Richard Morgan on THE DARK DEFILES

Richard Morgan has released an excerpt from The Dark Defiles, the third book in his Land Fit For Heroes series and the follow-up to the excellent Cold Commands. 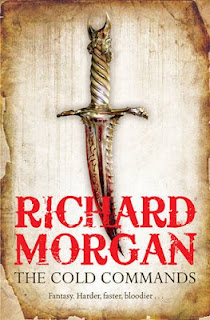 He's also revealed that the book is becoming rather larger than he was hoping, and he and his publishers are now actively considering breaking it down into two slimmer volumes. This isn't set in stone yet and depends on the final page count and if there's a place where he can split the narrative satisfyingly.


"Currently TDD is planned as a single volume to wrap up the trilogy – but it’s looking to be a dangerously fat volume, and I’m not sure how happy I am about that. So we may be talking about two books rather than one, forming a Land Fit for Heroes quartet. But that again will depend on finding a decent narrative shape for each of the two potentially slimmer books – I hate cliff-hanger finishes with a passion, and want to avoid writing one at all costs. Have to see how it shapes up further down the road……"


No release dates have been given yet, but I suspect we won't see the third book until the latter part of 2013 at the earliest.
Posted by Adam Whitehead at 16:05

Email ThisBlogThis!Share to TwitterShare to FacebookShare to Pinterest
Labels: a land fit for heroes, news, richard morgan, the dark defiles