An alien protomolocule has taken root on Venus. Earth and Mars are in a shooting match over an incident on Ganymede. The Solar system is moving towards all-out anarchy and war, and it falls to a well-meaning meddler, a canny politician, a Martian marine and a grief-stricken botanist to try to stop the descent into madness. 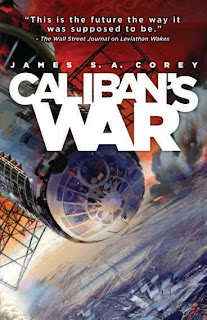 Caliban's War is the second novel in The Expanse series, following on from last year's well-received Leviathan Wakes. This is old-school space opera, featuring the crew of a spacecraft as they attempt to save the Solar system from an alien menace. The series features some nods towards serious science - the ships work strictly by Newtonian physics and there is no FTL travel, with the scope of events being limited (so far) to the Solar system alone - but it's certainly not hard SF. The emphasis is being on an entertaining, fast-paced read, and the book pulls this off with aplomb.

The cast of characters has been expanded in this volume, with only Holden returning as a POV character from the first volume. Unlike the first novel, which had a grand total of two POVs, this second volume features four: Holden, UN politician Avasarala, botanist Prax and marine Bonnie. This means that the authors have three major new characters to introduce us to, as well as continuing the storyline from the first novel and evolving the returning cast of characters (Holden and his crew). This results in the pace being marginally slower than in Leviathan Wakes, although certainly not fatally so. Indeed, Abraham and Franck imbue the new characters with interesting backstories, motivations and quirks. It's also quite amusing that the most enjoyable character in an action-packed space opera is a 70-year-old politician with a potty mouth.

There's some major shoot-outs, a few big space battles, a close encounter with a rampaging monster in a zero-gravity cargo hold and other action set pieces that are handled well, but the book falters a little in its handling of politics (which are fairly lightweight) and the characterisation of the bad guys, who never rise above the obvious.

Caliban's War (***½) is not as accomplished as its forebear but is still a page-turning, solidly enjoyable read. The novel is available now in the UK and USA.
Posted by Adam Whitehead at 14:22

All books are three and a half stars.