Several years have passed since Max Payne's last adventure. He has left the NYPD and now spends his nights drinking in seedy bars. He is recruited by a former colleague to work security for the rich Branco family in São Paulo, Brazil, in what appears to be an easy job. When Max's charge, his employer's wife, is kidnapped by a gang, he finds himself drawn into a conspiracy which will lead him into some very dark places as he tries to redeem himself and find out what's going on in this city. 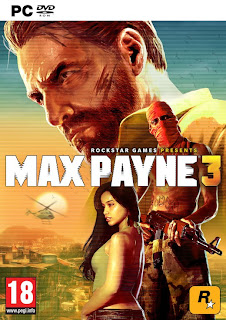 Max Payne 3 sees the return of the titular hero after a break of nine years. Remedy Entertainment, who made the first two games in the series, have moved on with their Alan Wake series of games, leaving Rockstar (best-known for the Grand Theft Auto series) to carry on their work. Whilst fans of the earlier games were dubious of this move, it was actually reasonably logical. Rockstar games often feature damaged protagonists trying to live better lives but being drawn back into a life of violence by circumstances, which is a perfect fit for Payne.

The game acts as a reboot of the series. References to the events of the first two games are minimal and, aside from a couple of flashback missions set in New York, the game is set in a different city in a different country with a very different culture (not to mention a different and un-translated language). The only constants are Max himself and, of course, his ability to slow down time to engage in combat.

Max Payne 3 is overwhelmingly impressive from a production values standpoint. The graphics are fantastic, with the game employing a vivid visual style. Keywords from conversations flash onto the screen and sometimes the action dissolves into line breaks and the colour desaturates, almost like you're watching the action on an old 1980s TV that is about to expire. The game's colour palette tends towards the bright and colourful, but there is a dark hue to everything. Sections set in crumbling warehouses or an abandoned hotel contrast the light and dark elements of the game's style. Animation is astonishing, with Max storing his weapons on his person and moving them around naturally to swap guns or take painkillers. The game feels like it's had a million dollars spent on every single minute of it (in sharp contrast to the low-budget feel of the first game, with its amateur cut scene actors).

The game's centerpiece is action and gunfights, and the title impresses in these areas. Combat is hard, fast and furious, with effective use of bullet time necessary to proceed. The game also employs a cover system, one of the more tiresome elements of modern action gaming, but the use of bullet time and headshots makes it mostly an optional feature with only a few moments where its use is necessary to proceed. More satisfyingly, the ludicrous modern gaming concept of 'regenerating health' has been thrown out of the window and replaced by Max's more familiar use of painkillers, adding a great deal of tension to the action sequences and requiring the player to plan attacks more intelligently than just charging in, knowing you can hide behind a box to get your health back. Unfortunately, bullet time has been gimped since the second game. There's only one level of bullet time (you don't get additional slowdowns when you shoot more people) and, ridiculously, it doesn't regenerate when you make kills. Given it is fairly slow to regenerate, a fair amount of combat has to take place without the use of the game's central mechanic and main selling-point, which seems strange.

The writing is okay, though Dan Houser's script is notably less funny, knowing or introspective than Sam Lake's work on the first two games. But it's reasonable and House deserves some props for moving Max on in his life, continuing his character arc and trajectory from the first two games. The other characters in the game are somewhat less successful, with no memorable equivalent to say Vladimir Lem or Mona Sax, but they do their job well enough. The change of setting is far more successful, with São Paulo (or, rather, the criminal underworld that is the main setting) presented as a dark, threatening city which is a perfect match for the semi-noir stylings of the series. This is backed up by the soundtrack (by American band Health), which is excellent. 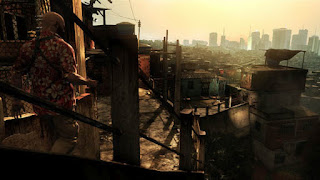 So the game is well-made, with amazing production values, a decent story, some good characterisation and great action (if not quite as well-executed as the first two games). But there is a major problem. You see, the game doesn't actually like you playing it very much. For every minute you spend actually playing the game, it demands that you spend at least another watching it play itself, through intrusive use of lengthy, unskippable (as they hide loading sequences) and non-interactive cut scenes. Cut scenes are not just present at the start and end of each level with maybe a few reserved for major moments mid-level (the sort of structure the first two games employed), but they take place near-continuously. Frequently. opening a door will trigger a cut scene showing Max going through the door and taking cover before letting you resume control. This even happens if you've already flown through the door in shootdodge mode, resulting in frustrating (and continuity-breaking) moments where you could have wiped out a dozen bad guys in five seconds in bullet time but the game demands that you hide behind a counter instead and fire from cover. Cut scenes often kick in after you've dispatched the last bad guy in an area, taking you to a new area with no opportunity to loot the enemies for ammo (which is in fairly short supply throughout most of the game). There are also too many moments when the game has Max doing some really cool things (like diving between moving trains or jumping from an exploding rooftop onto a helicopter) when you don't have control.

Max Payne 3 is, of course, a linear action game and railroading is to be expected. Certainly the first two games had a lot of cut scenes and moments where player choice was taken away, but generally it was in areas where it made sense. They were also infrequent compared to the amount of time the player had control. Max Payne 3 actually seems to resent you doing anything other than what it wants you to, and punishes you if you try. During a shoot-out near a plane taking off, any attempt to jump onto the plane will result in a cut scene where a bad guy kills Max with a grenade, with Max standing there and unable to do anything. During a battle on a river dock, falling in the water will result in Max's instantaneous death, despite him being able to swim in a cut scene a minute later. Despite Max's ability to slow down time in gameplay, in a cut scene he runs into a room where a friend is being held hostage and is powerless to stop them being executed, despite the fact that if you had control you could wipe out everyone there in moments. The game also employs a checkpoint system rather than allowing quicksaves, resulting in the player sometimes having to repeat 10-15-minute long sequences if they are killed, which is simply unacceptable.

When it actually lets you play it, Max Payne 3 (***) features some intense and engrossing action sequences. However, the game makes the classic mistake of placing itself and its story (which is decent but nothing special) ahead of the enjoyment of the player. As a visual experience, Max Payne 3 is impressive and intermittently even brilliant, but as a game it's a let-down compared to the first two titles in the series. It is available now in the UK (PC, X-Box 360, PlayStation 3) and in the USA (PC, X-Box 360, PlayStation 3).
Posted by Adam Whitehead at 11:03

I appreciate the thorough review, I've been wondering about this one. I am a HUGE fan of the first two Max Payne games and have played them many a time through, but I've been less than enthused about this one largely because of aesthetic reasons. It doesn't "look" like Max Payne. I for one am not tired of the gritty streets and the action taking place on dark, rainy nights. The bright lights and bright colors just don't excite me at all, and now I am less excited given some of the problems you have cited, most notably the manner in which bullet time works, or doesn't.

As a fan I'll play the game one of these days, but given your thoughts on this I will be waiting until I can pick it up really cheap off the used game pile. It is a shame.

I hoped for more but will add it to my to-play list. Nostalgia for the first two won't let me pass this up.