Eastbound and Down: Season 1

Kenny Powers is a former baseball pitcher, noted for his powerful throws. He has been forced out of the game due to his drug-taking, partying, abrasive personality and use of steroids, all of which has also left him broke. Returning to his hometown of Shelby, North Carolina, he is forced to move in with his brother's family and take up a position as a temporary sports coach at his old high school. Powers is determined to both return to the major leagues and win back his old sweetheart, who is now engaged to the school principal, but finds it difficult to change his lifestyle and attitude. 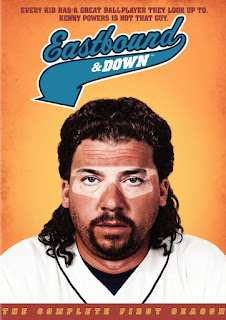 Eastbound and Down is a HBO comedy show starring Danny McBride, who also co-created the series. It's strongly similar in style to the Will Ferrell school of comedy (Ferrell is a producer on the show and has a recurring role), based on social faux pas and inappropriate behaviour with awkward silences and a healthy dose of swearing and occasional gross-out moments. However, freed from the cliches of the two-hour comedy movie format, the show is more successful at achieving a decent level of characterisation and (mostly) avoiding mawkish sentiment.

McBride is the show's main star and makes the character of Powers work well. He's not a particularly sympathetic figure, especially as he himself is responsible for almost all of his problems, but is funny and possesses enough personality to make it plausible that he'd have so many friends and people who want to help him, despite his appalling behaviour. Most of the rest of the cast puts in good work, especially John Hawkes and Jennifer Irwin as Kenny's long-suffering brother and sister-in-law, but the show relies on McBride's performance in order to function and he does a good job with the more dramatic stuff (particularly the final episode, which Powers's ambitions and dreams are not so much crushed as painfully atomised) as well as the humour.

The show employs an interesting device where each episode begins the moment the previous ends (breaking this format once), with the story continuously developing over the six-episode season. Character relationships evolve fairly steadily (and amusingly), although Powers's nemesis, Principal Cutler, doesn't work very well. It's good to see Will Ferrell being used fairly sparingly, but also disappointing that Craig Robinson's hilariously inept rival baseball player doesn't get more screentime.

There are some problems with pacing. The show frontloads a lot of its best gags into the first episode and the rest suffer a little in the process, whilst a fair few characters are under-utilised. The short length of the season (six 30-minute episodes) also prevents a number of side-stories from being developed. This does result in a concise, focused series that is surprisingly restless, unwilling to settle into a predictable format and takes a major turn in direction at its conclusion.

The first season of Eastbound and Down (***½) is watchable, funny and overall enjoyable thanks to some good performances, but is slightly let down by uneven pacing, a fair few jokes and moments that fall flat. The show is available now in the UK (DVD, Blu-Ray) and USA (DVD, Blu-Ray).
Posted by Adam Whitehead at 15:58

untold comedic riches await you Adam, in seasons 2 and 3.