2034, post-apocalyptic Moscow. A year has passed since the Spartan Rangers discovered and occupied the D6 bunker, making them one of the powerhouses of the Metro. Artyom is now a respected ranger, but is haunted by his decision to nuke the mysterious 'Dark Ones'. When word arrives of a Dark One infant that survived the cataclysm, Artyom sets out to rescue the creature and atone for his actions. Along the way, he discovers that one of the other factions in the Metro has discovered a secret weapon that could turn the tide of power amongst the survivors forever. 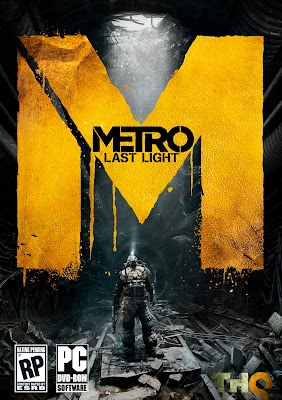 Metro: Last Light is the sequel to Metro 2033, picking up where that game left off and building on its storylines and characters. Last Light is pretty unforgiving to those who haven't played the first game, not bothering with backstory or exposition, so I recommend that players either pick up the first game before this one, or make full use of online plot summaries to get them up to speed.

As before, this is a first-person shooter which alternates combat with exploration and survival elements. Combat is great fun and enhanced this time around by the addition of better stealth mechanics: Artyom can knife opponents from the shadows or knock them out if he can sneak up behind them. Given a fairly frugal approach to ammo in the game (although it's not as punishingly stingy as the first game), conserving firepower and resorting to stealth rapidly becomes the first choice in every situation. Stealth is even more important when fighting the game's mutated wildlife, who can't be stealth-killed but can be avoided by hugging the shadows and extinguishing light sources.

The survival element comes in the form of the handy gas mask, which is necessary to survive on the surface and exposed parts of the underground. The mask's filters need to be changed on a regular basis and it can get covered in debris, gunk from exploded enemies and water quite easily, forcing you to wipe it clean. This is fine in general exploration, but mid-combat it can add a panicky moment of blindness which adds to the chaos of combat. The survival element is tremendously enhanced by the impressive visuals and the bleak, lonely atmosphere. Metro: Last Light does atmosphere better than almost any other FPS game I've played.

The moments of bleakness are counterbalanced by the towns (former Metro stations that have been taken over as habitations for survivors), which are bright, warmer and packed with people. The towns are a good place to chill out and restock on supplies before heading out. Unfortunately, as with the first game, they are essentially just shops with only modest improvements in giving you more to do (though a couple of optional missions can be found, along with a dubious strip club and a shooting range mini-game). The towns are crying out for more development, and as with the recent BioShock Infinite there is a feeling that maybe this would have been a stronger game if it had been more of an RPG than a FPS.

Still, an FPS it is and a good one at that. Making the linear corridor FPS (which is what Last Light is, apart from a couple of enormous arena-like outdoor areas where you have more freedom to choose what approach to take next) compelling and interesting is difficult, but 4A Games has managed it by giving the game a sense of place and atmosphere that is second to none. The limited nature of the genre means that you can't explore the people and places as much as you might want to, but through overhead dialogue, some excellent art design and Artyom's own notes, they successfully engross the player in this strange world.

Voice-acting is good and characterisation is fairly strong, although a romance with another character does kind of come out of nowhere. Whilst you spend a good chunk of the game going solo, you also team up with other characters for chunks of it, and they manage to be effective aids in combat without hogging the limelight. One character 'buffs' you by providing you with intelligence on enemy positions and numbers rather than fighting outright, which is a great idea that the game executes well.

Metro: Last Light (****½) is an improvement on its predecessor in almost every department: it's slightly longer, with more impressive graphics, more satisfying combat, vastly superior stealth and a more interesting storyline. On the minus front, it does feel very reminiscent of its forebear, more the second half of the same game rather than a sequel, and arguably the game makes a few too many concessions to the mainstream, with more plentiful ammo and supplies meaning less moments of nerve-shredding terror. Still, it's a bleak, atmospheric and gripping game. It is available now in the UK (PC, PlayStation 3, X-Box 360) and USA (PC, PlayStation 3, X-Box 360).
Posted by Adam Whitehead at 11:54