England, 1536. Anne Boleyn has been executed and King Henry VIII has married Jane Seymour. Henry is incredibly happy with his new wife, who soon bears him his much-longed-for son. However, Jane is also keen for Henry to reconcile with his daughters Mary and Elizabeth, and Henry is concerned that Jane is meddling in affairs beyond her interest. Such matters become less important when the north of England rises in rebellion against the crown, furious with the dissolution of the monasteries and what they see as the corruption of the king's chief minister, Thomas Cromwell. 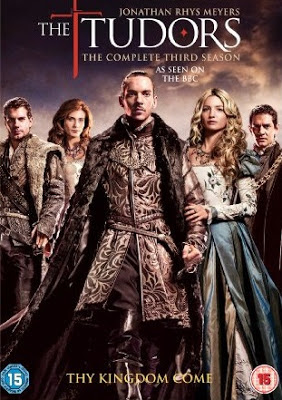 The third season of The Tudors covers the period running from 1536 and the immediate aftermath of the execution of Anne Boleyn, to 1540 and the king taking Catherine Howard as a mistress. In terms of wives, it's the busiest of the four seasons as it has to get through three of them whilst also addressing the popular rebellion known as the Pilgrimage of Grace, the downfall of Thomas Cromwell, the rise to prominence of the Seymour family (who would retain some power even beyond Henry's death) and the religious opposition of Cardinal Reginald Pole, who stirs up opposition to Henry VIII in Europe. Furthermore, it only has eight episodes to do all this in (as opposed to the ten apiece of the other seasons). They even fit in a somewhat bizarre episode in which Henry has a mini-breakdown and works through it with the help of his fool (a great performance by David Bradley).

The third season is therefore quite impressive in that it manages to pack all of these storylines into a very short space of time and explore them quite thoroughly without feeling rushed. It's a fairly dynamic season, complete with more action-adventure subplots as the would-be assassin Sir Francis Bryan chases Reginald Pole across Europe and as the Pilgrimage of Grace marches across England with Charles Brandon leading an army against them.

The performances range from the excellent to the okay. James Frain's Thomas Cromwell is probably the season highlight as he loses control, but Henry Cavill improves yet more as Brandon is ravaged by guilt over the deaths he causes. Jonathan Rhys Meyers, again, is fairly neutral in his performance, but there's a nice turn from singer Joss Stone as Anne of Cleeves. Giving an unproven actress a tricky role with a German accent was quite a challenge, but she handles it reasonably well. The season also benefits from Sarah Bolger coming more to the fore as Mary Tudor, a difficult character to get right. Mary was a woman of principal and authority, but one who became increasingly ruthless when she herself became queen, and Bolger combines those traits quite well. Unfortunately, the loss of Natalie Dormer's Anne Boleyn is more keenly felt, with Annabelle Wallis's Jane Seymour being rather unmemorable in comparison, despite an odd attempt to draw parallels between her and Diana, Princess of Wales.

The season is also let down a little by the arrival of Catherine Howard at the end of the season. Though Tamzin Merchant (probably better known for almost being Daenerys in Game of Thrones, playing the role in the unaired pilot and later being replaced by Emilia Clarke for reasons that have never been divulged) does a good job with the material, the writing never really explains why Henry would fall for such a flighty creature. That has to wait until Season 4, when the suggestion that Henry is having what we'd now term a mid-life crisis is better-explored.

Season 3 of The Tudors (***½) maintains the show's run of being watchable, entertaining, historically interesting (though not hugely accurate), slightly trashy but lacking in depth. The season is available now in the UK (DVD, Blu-Ray) and USA (DVD, Blu-Ray).
Posted by Adam Whitehead at 11:00

At the end of the article, I think you mean Season 3 (it says season 4)