Robert Jordan bigging up A GAME OF THRONES in 1997

This is a cool find, courtesy of Terez. It's a letter from the late Robert Jordan to George R.R. Martin's editor, Anne Groell, requesting a signed copy of A Game of Thrones. The letter is dated 6 March 1997, after Thrones came out in hardcover (August 1996) but before its paperback publication. 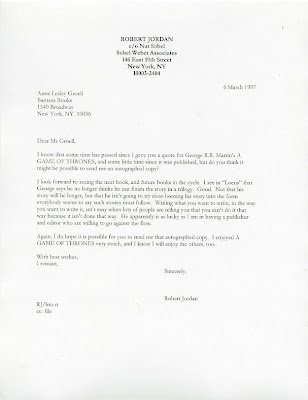 
It also features an interesting statement from Jordan regarding series length:


"I see in Locus that George says he no longer thinks he can finish the story in a trilogy. Good. Not that his story will be any longer, but that he isn't going to try shoe-horning his story into the form everybody seems to say such stories must follow. Writing what you want to write, in the way you want to write it, isn't easy when people are telling you that you can't do it that way because it it isn't done that way. He apparently is as lucky as I am in having a publisher and editor who are willing to go against the flow."


GRRM has said many times that he credits the early success of A Game of Thrones in paperback to Jordan's cover quote and, a bit later, people picking up Legends to read Jordan's short story New Spring, also reading The Hedge Knight and then picking up the novels. An interesting insight into Jordan's opinion of Martin (and for the reverse, Martin penned a memorial for Jordan when he died in 2007).
Posted by Adam Whitehead at 13:08

Email ThisBlogThis!Share to TwitterShare to FacebookShare to Pinterest
Labels: a game of thrones, a song of ice and fire, george r.r. martin, robert jordan, the wheel of time

I probably should have given a link to the actual blog post. The "enjoyed A Game of Thrones very much" bit was old news, but RJ writing to Bantam asking for an autographed copy like a fanboy...that's new. And funny. I can't wait to go to Charleston and dig through this stuff; maybe the librarians will let me help them digitize the collection. :) If not, I'm sure I'll find something to do.

Sir Robert of Tor knew of what he was talking.

Alphabet soup of the day: Ndinwat

I bought the book when I graduated from college in June 1997 and just before I went to grad school. I was specifically looking for "more adult level fantasy novel" and randomly pulled a paperback from the shelf and found A Game of Thrones with the Jordan quote (who at the time was my favorite author) on the cover. Read the back blurb and took it to the counter. Ok, gotta give this a try. Little did I know...

So a mighty posthumous thank you to Mr. Rigney!

And here we are 16 years later and GRRM is now trying to shoehorn his story into 7 books.

I wonder what RJ would think, now.

That's exactly why I picked up Game of Thrones. I got Legends to read New Spring, and GRRM is one of the authors I started reading after WoT.

This is awesome sauce! Fanboy, indeed!

Sad he died without seeing the end of the saga.

I actually got in to the books in the opposite direction from most that are on here. I had been into young adult SFF when I was a kid, but through high school and college got away from it. Then soon after college a friend of my recommended A Game of Thrones. After tearing through all the books that were out at that time, I was hungry for more, so I did a google search and turned up an interview with GRRM where he mentioned Robert Jordan, and so on, down the rabbit hole.

It makes me wonder how both series would have been if they were forced to be the trilogy format. Maybe they could have done a dual trilogy but having the first have some major closure. I have to be honest and say both series dragged on much farther than necessary especially with the length of time per novel and the rather lacking meat of the story from all that waiting.