A glimpse of a FIRST LAW world map

The First Law comic adaptation has given us a glimpse of a world map for Joe Abercrombie's fantasy world. On his blog, Abercrombie has confirmed that the map is mostly accurate and canonical. On the following image the map is shown with the existing maps of the Old Empire to the left and Styria to the right, whilst at the bottom is an attempt to combine them into one image. 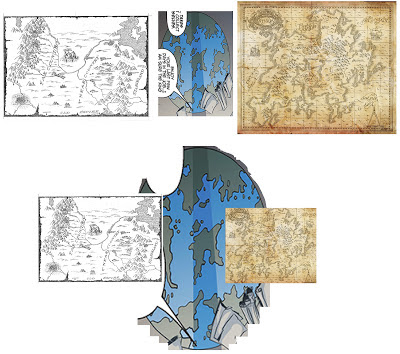 Obviously, the comic strip image is small, somewhat compressed and not entirely to scale with the published maps, though it is possible to get a good sense of what's going on and what is where. I will try to use this information to construct a clearer map at a later date.

The island in the middle is clearly Midderland, the island-continent on which the heart of the Union and Adua are situated, whilst to the north lie the Northlands, with Angland likely being the peninsular immediately to the north-west of Midderland. Kanta is one of the two landmasses to the south; likely the one to the south-west, with Dagoska located on the narrow peninsular reaching up towards Midderland (it's also possible that both landmasses to the south are Kanta, with the sea between them being a very large bay rather than a separating ocean).
Posted by Adam Whitehead at 12:50

It's a small glimpse, but a glimpse all the same, true.

You're right, we can't tell if there are two landmasses to the south, or just one. No evidence either way yet.