It can be tough for developers to make sequels to best-selling games. Vary the formula too much and people will complain about you moving too far from what the game is about. Don't change things and people will moan that you've produced an overpriced expansion rather than a new title. 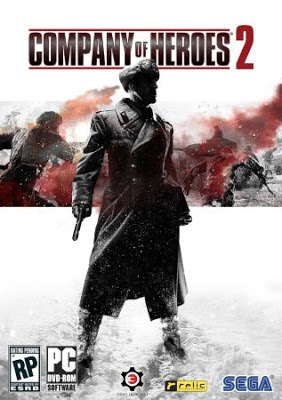 This is a problem Relic know well. In 2009 they released Dawn of War II, the sequel to their successful 2004 Warhammer 40,000 RTS. They changed a lot about the game, moving it away from being a real-time strategy game to more of an action RPG: Diablo in space with more than one playable character. Whilst it was a very solid game on its own right, it did feel like a different genre to the first game. Fans complained.

For Company of Heroes 2, Relic's sequel to their very popular 2006 strategy game, they've gone conservative. The shift in focus and time means new sides - the Russians and the German armies of the eastern front - but the improvements over the first game are modest. The graphics are better, but not as improved as you might expect given the seven-year wait for this game. This is less of a dig at Company of Heroes 2 (which is still the best-looking strategy game in existence, at least until Total War: Rome II launches in September) and more of a reflection of how astonishingly far ahead of its time Company of Heroes was in 2006. The sound is a lot better, with booming explosions and realistic machine gun noises, a lot of them sampled from the genuine weapons. Sound design isn't usually something that stands out in games, but Company of Heroes 2's is simply the best I've ever encountered in a game.

In terms of gameplay, things proceed much as before. The battlefield consists of a home zone for each team and a patchwork of territorial zones in between. By capturing territory you boost your resources and can summon new troops to the battlefield more quickly, as well as unlocking fresh abilities through combat. Units gain experience in battle, becoming more accurate or tougher, and so does the commander, unlocking abilities such as recon planes, artillery bombardments or air strikes. Company of Heroes 2 changes things a little by having both locked territories (which are pre-set to provide fuel, ammunition or manpower points) and 'open' ones, which you can set to a particular resource by building on them. This is a nice touch which helps factions if they lose a rare resource zone.

Of course, you have to fight you away across these maps. Infantry can be summoned quickly to the battle and are surprisingly versatile, with anti-tank squads perfectly capable of taking down individual enemy tanks (though they're less effective against larger armoured formations). Snipers can provide both recon and a way of eliminating infantry at range, whilst mortars are formidable short-range artillery units and heavy machine guns are excellent for disrupting enemy charges. In the mid-game armoured cars, anti-tank guns and light tanks appear, and in longer battles expect to see heavy tanks like the T-34 and the Panther enter the fray. So far, so much like Company of Heroes. Improvements are modest rather than revolutionary, although a much stricter 'true sight' system allows for some sneaky tactics and makes things like using smokescreens much more effective (as it removes the enemy unit from sight altogether, rather than making hitting him harder). Some may bemoan the less-effective MG units, which find it tougher to pin down enemy infantry and reduce their effectiveness.

It's all loud and fast-paced but the game retains satisfying tactical elements. It's possible for battles to swing quite wildly from side to side, with armies being driven back to their bases only to burst forth again, reinforced for battle against their exhausted pursuers. It's great stuff, as much now as it was back in 2006. 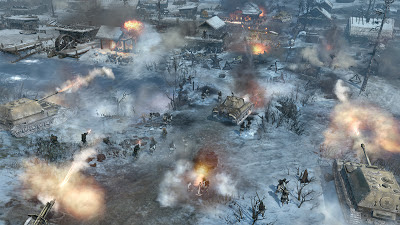 In terms of structure, there's a single-player campaign which takes place against a backdrop of different parts of the war. This is framed with a former Red Army soldier being interrogated for seditious activities during the war, allowing the narrative to jump from Stalingrad back to the opening of Barbarossa, the siege of Moscow and the battles for Kursk and Berlin. Relic try to do something interesting with this narrative, by focusing on the individual heroism and bravery of the soldiers whilst exposing the brutality of the Soviet regime (which was not much better than the Nazis in terms of the death and destruction it caused). It fails due to weak writing and a feeling that there's too much of a Western (and particularly American) sense of morality impugning on what was a true life-and-death struggle for millions of people. The ambition is laudable but the execution is poor. Individual missions are quite well-designed, especially in the latter part of the campaign, but ultimately there are too many arbitrary restrictions on what units you can or can't use in a mission.

More impressive is the Theatre of War mode, which offers up a variety of different missions to the player. Some are single-player, focused scenarios (such as using a squad of snipers to assassinate enemy officers in a village) whilst others are bigger co-op missions or full-scale battles against veteran enemy forces. The Theatre of War covers events for 1941 only; updates are promised for the future to cover the rest of the conflict. Freed from the restrictive narrative, these scenarios can be more inventive and interesting than the campaign missions.

Of course, multiplayer is a big focus and is as fast, furious and smart as the original game's.

The game also introduces a couple of other ideas. One is the notion of winter itself as a threat, with the temperature suddenly dropping and your soldiers no longer able to fight. Getting them into cover or, better still, to a campfire, becomes a priority. It's a nice idea but it adds an extra level of randomness to the game which most players will likely prefer to do without. Fortunately, it can be switched off for multiplayer. Another new feature is that an NKVD officer will be deployed to your HQ whenever new infantry are deployed; if the infantry retreat to your base, the NKVD officer will shoot them. This simulates Stalin's 'not one step back' doctrine which made Russian soldiers fear retreating more than advancing. Again, it's laudable that Relic try to reflect this, but in practice it's just rather annoying. It's also historically inaccurate that your soldiers won't simply kill the NKVD officer themselves (NKVD troops assigned to Red Army squads occasionally 'fell to enemy fire, honest' during the war if they proved too zealous in punishing their soldiers). Since the retreat order is the best way to avoid being pinned by MG or mortar fire, the game punishing you for using it is something that gets old rather quickly.

Ultimately, Company of Heroes 2 (****½) is a modest evolution of the original game rather than anything too spectacular. The Theatre of War mode is its biggest improvement over the original, along with some exceptional sound design and graphics. Some of the new features meant to convey the atmosphere of the conflict backfire a little, but overall this is an accomplished, impressive and enjoyable RTS. The game is available now in the UK and USA on PC.
Posted by Adam Whitehead at 10:54