George R.R. Martin has confirmed the casting of another role for the upcoming fourth season of Game of Thrones. 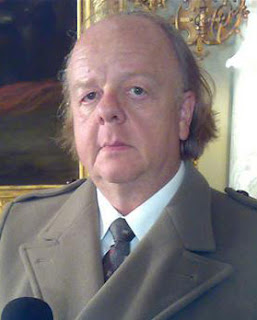 Roger Ashton-Griffiths is a veteran character actor of dual British and Canadian nationality. He began acting on screen in the early 1980s, winning a role in Terry Gilliam's cult classic Brazil in 1985. He later appeared in such TV shows as The Young Indiana Jones Chronicles, Ivanhoe (alongside Thrones's Ciaran Hinds and James Cosmo) and Martin Chuzzlewit, and films such as The Madness of King George and Gangs of New York. More recently he has appeared in The Brothers Grimm, Torchwood and The Colour of Magic. He also visited the court of Henry VIII twice in 2009, playing Cardinal Wolsey in Henry VIII: Mind of a Tyrant and then Sir John Hutton, Henry's envoy to Anne of Cleeves's father, in Season 3 of The Tudors. 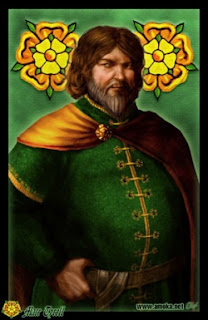 In Thrones Ashton-Griffiths is playing the role of Mace Tyrell, Lord of Highgarden, ruler of the Reach and Warden of the South. He is the son of Olenna Tyrell, the 'Queen of Thorns' (Diana Rigg) - who refers to him cheerfully as an 'oaf' - and the father of Margaery (Natalie Dormer) and Loras (Finn Jones). During Robert's Rebellion, Mace Tyrell remained loyal to the Mad King and had his armies besiege Storm's End, almost starving Stannis Baratheon and his garrison to death before they were resupplied by Davos Seaworth. Mace appears to be a bumbling fool, but is cannier than he looks. He surrounds himself with able advisers like the outstanding general Randyll Tarly, the diplomatic Mathis Rowan and the admiral Paxter Redwyne and then takes the credit for their accomplishments. He is obsessed with getting a child or grandchild onto the Iron Throne at all costs.


The casting of Ashton-Griffiths as Mace Tyrell confirms that the recently-cast Mark Gatiss will be playing another role. Speculation is rife on what this role will be.

Game of Thrones's fourth season began filming at the start of the month and the production is currently in Iceland, which is serving a larger role with scenes in the south also being shot there as well as material from beyond the Wall. The expanded role of Iceland may have come at the expense of Morocco, as the show appears to have dropped that location. Instead, Daenerys Targaryen's storyline will instead be filmed in Croatia, with the city of Split believed to be standing in for Meereen.

The show also recently confirmed its writing and directing line-up for the season. David Benioff and D.B. Weiss will again script seven episodes, the bulk of the season. George R.R. Martin has already written his script for the second episode, and story editor Bryan Cogman is stepping up to write two episodes this season. It does not appear that producer Vanessa Taylor, who wrote episodes for the second and third seasons, will be returning this year as a writer.

For the directors, Benioff and Weiss will be co-directing the first episode. Alex Graves, who directed the extremely well-received And Now His Watch Is Ended last year (as well as another episode), is stepping up with four episodes (2-3, 8 and 10). Michelle MacLaren is returning to direct episodes 4 and 5, and Alik Sakharov will be helming episodes 6 and 7. Neil Marshall, responsible for Season 2's stand-out episode Blackwater, will be directing Episode 9, which is again expected to be a big action and effects set-piece episode. David Nutter, who helmed last year's highly-regarded Rains of Castamere episode, is taking a break for Season 4 but hopes to return for Season 5.

Producer-writer-showrunner Benioff recently said that they are fully expecting Season 4 to be the best yet, but he is having 'nightmares' about Season 5. Season 5 will likely be a combination of material from the simultaneously-occurring novels A Feast for Crows and A Dance with Dragons, which will be a complicated undertaking.
Posted by Adam Whitehead at 10:57

GOT fan from Split, Croatia. Must admit that I don't see Split as Mereen No piramids or nothing. They put an ad in local paper for 400 extras so I imagine that there are going to be some bigger scenes. I applied of course :-)

I think Gatiss is playing Coldhands.

Gatiss has teased that his role involves 'hair', so I'm pretty sure that he's playing Aeron.