Thousands of years ago, the alien Sirians visited Earth and left behind advanced technology. Humanity begins to discover this technology in the mid-21st Century, attracting the attention of the evil Lord Mental. Mental attacks Earth with his endless hordes of minions, almost wiping out the species. It falls to Sam 'Serious' Stone, the most capable soldier left alive, to fight his way through Mental's hordes to activate a time machine near Cairo. This will allow him to travel back in time and enlist the aid of the Sirians in defeating Mental once and for all. 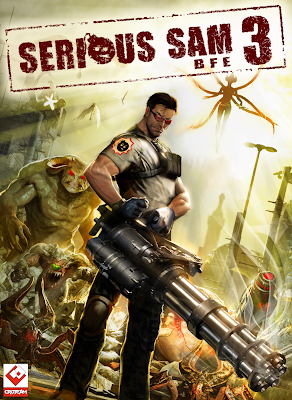 Serious Sam 3 is a prequel to the first Serious Sam game, making it an ideal jumping-on point for new players (though this is hardly a complex narrative). Serious Sam 3 is a game which has no truck at all with the modern first-person shooter genre. Cover systems, regenerating health and being limited to only carrying two or three guns at a time are all thrown out the window in favour of the genre in its purest form: you have lots of guns and have to use them to shoot lots of bad guys.

Serious Sam 3 takes this retro approach seriously. The first level is in fact a mocking pastiche of Call of Duty-style games, with Sam being shot down on a helicopter and having to fight his way out from the Cairo suburbs with limited weapons and ammo, proceeding down closed-in streets and alleyways and occasional indoor spaces, fighting grey-clad soldiers. It's not long before the game says, "This sucks, right?" and gives you a rocket launcher and unleashes its hordes of dual-minigun-wielding giant spider/human hybrids upon you, at which point the game kicks into life.

Each level after the first one is generally wide open, allowing you go anywhere you want and fight the enemy in whatever manner you choose. Typically each level consists of one or two large plazas or wide open spaces where full-on battlefield carnage is the order of the day, along with a few linking sections and occasional buildings. The game liberally scatters ammo, guns, armour and health around and then hurls a ludicrous number of bad guys at you. As the game continues you go from having to kill a few dozen bad guys to complete a level to, on the final mission, over 1,700. There are points in the game when a vast horde of enemies appears in the distance and you can comfortably empty your minigun, rocket launcher, quad-barrelled laser battery, giant cannon and machine guns into them without missing once and still have dozens of enemies left to deal with. This is indeed the FPS reduced to its purest form. 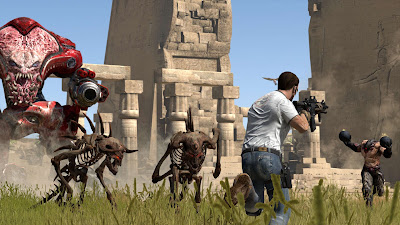 That said, the game isn't completely mindless. Each enemy has specific strengths and weaknesses, as do each of your weapons, and finding which weapon works best against which enemy provides a solid tactical element to the game. Similarly, trying to hide behind cover and snipe at enemies is a good way of getting killed, so you have to keep moving and learning how each enemy moves, what their attacks are and what's the best position to attack them from is important to ensure victory. The game's campaign is also playable with up to 15 other players in co-op, which is a hell of a lot of fun.

The game can't quite escape being a 2012 shooter, so we do get a little bit more in the way of dialogue and cut-scenes this time around. They're fairly brief and the writing is cheesier than prime Stilton, but they work in getting the plot (for lack of a better term) across. Serious Sam 3 can also be seen as a rebuke to Duke Nukem Forever, a long-gestating, old-school FPS released in 2011 to a woeful reception. Whilst Duke Nukem bafflingly cobbled together old-school design with some of the weaker elements of modern FPS (regenerating health and a limited weapon selections), Serious Sam 3 has some great level design, non-regenerating health and a ludicrous weapons arsenal. Serious Sam 3 also manages to go for some amusing lowbrow humour without being tiresomely misogynistic, unlike Duke (indeed, the only named and notable 'good' characters in the game apart from Sam himself are women, both presented simply as other soldiers).

Serious Sam 3 does have its flaws, however. Those who've played the earlier games in the series will find little new here, aside from the graphics being substantially better. Most of the enemies are the same as in the original Serious Sam, as are the guns, and changes are fairly minimal (the demon monkey is a new enemy that only succeeds in being irritating rather than challenging). The level design is based heavily around Egypt, like the original game. Whilst there is a strong tactical element to the game in terms of weapons choice, getting to know the enemy and where to best position your character for combat, this also becomes second-nature pretty quickly. With little surprises in later levels, the latter part of the game can feel more like a repetitive grind. Also, whilst the game is mostly excellently paced, it drops the ball on the last level which rapidly becomes exceedingly tedious. The end-of-game boss is impressive and the way you fight him is great (hint: it involves a jetpack), but the game is also fairly obtuse about how exactly you defeat him. It's a bit of a let-down given that the original Serious Sam's end-of-game boss was more impressive (a two-mile-high demon you killed by pumping millions of bullets into him as he advanced menacingly towards you from several miles away).

Serious Sam 3 (***½) is a frantic, fast-paced shooter with a surprising amount of tactical thought required for victory. It shows up many modern FPS games as being slow and boring, but it risks descending into a grind in its later levels. However, the problems with the single-player structure are more than made up for by the excellent co-operative multiplayer. The game is available now in the UK (PC, X-Box 360) and USA (PC, X-Box 360).
Posted by Adam Whitehead at 13:14