Project Eternity is the working title (though possibly the final one, given how popular it's turned out) of Obsidian's new, old-school RPG due out in mid-2014. Funded by fans on Kickstarter, it's planned to be a bit of a throwback to the days of the old Infinity Engine days (which powered the Baldur's Gate and Icewind Dale series of RPGs, plus Planescape: Torment). 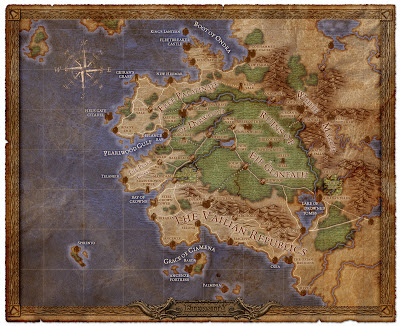 Obsidian have released a new map of the world where the game is set, which is promised to be a traditional fantasy world with a few twists (such as the dwarves being more inspired by Inuit culture than traditional Tolkien dwarves, and one of the planned NPCs is a female dwarven character). They've revealed that the city of Defiance Bay (which can be seen in the north-west) will be a major location in the game and much of the action will be set in the vast Dyrwood.

It's been a while since I last threw myself into an old-school style fantasy video game. I'm definitely curious about this title now. I wonder if it'll be one that I'll end up addicted to playing when it comes out. :)