In the future there is almost no crime. The City, a beautiful landscape of towering white buildings, is well-policed and life is pleasant. But this is only possible through a government which is totalitarian and repressive. There are those opposed to the way the City operates, from reformers working within the system (usually to no avail) to the Runners, free-running messengers and couriers working to unseat the regime. When an innocent cop is framed for the murder of a key reformer and the police declare war on the Runners, it falls to Faith Connors to fight the system and expose the truth. 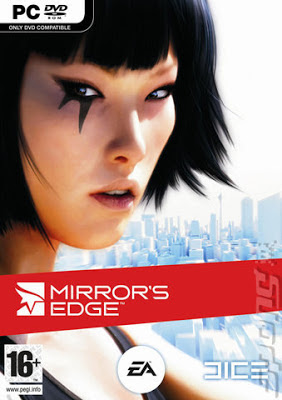 Mirror's Edge is an interesting game developed by DICE, the creators of the perennially popular Battlefield series. After many years of making manly games about guns and explosions, DICE decided to change tack with a game that mixes puzzles and parkour (though there are still a few guns and the occasional explosion). The game can be summed up as Portal by way of Prince of Persia, mixing the environmental puzzles of the former with the athleticism of the latter.

The game's striking art aesthetic is the first thing that hits the player: the game strongly emphasises the colours white and red, sometimes glaringly so but mostly in a way that gives a feeling of high-tech isolation. The simple use of colour (the skies of the game are a particularly strong blue colour) gives the game a different feel to many other first-person games, which tend towards brown and grey. The high-tech feeling of the game also contrasts the dingy, gritty and dystopian feel of many other games. Playing Mirror's Edge is often a pleasure down to the sheer beauty of the art style.

Faith is fairly athletic and can run, jump, wall-run and cling onto ledges. She can also do a reverse-jump off surfaces to reach more inaccessible areas. Though played from the first person, Faith's arms and legs can be seen at all times, giving the player a strong sense of physical presence in the game. There is also a vivid sense of momentum and speed, with Faith needing to build up a fairly strong head of steam if she wants to clear a particularly large jump. The rooftop sequences are great, if occasionally a little too hamstrung by there being just one or sometimes two routes to your destination rather than being fully-open playgrounds. Combat is also satisfyingly physical: Faith can do flying kicks, punches and disarming manoeuvres (which also work as takedowns).

Gunplay is much more insipid. The developers seem to have included it very reluctantly out of a sense of realism: if Faith can disarm someone, why can't she just pick up the gun and use it? The problem is that gunplay, shooting at people across the large levels, feels like it goes against the ethos of the game. Some sort of character or plot-based reason why Faith refuses/cannot use firearms could have been introduced and led to be a more interesting game. As it stands, those moments when the game screeches to a halt as Faith has to shoot her way out of a lobby packed with bad guys feel like admissions of failure. 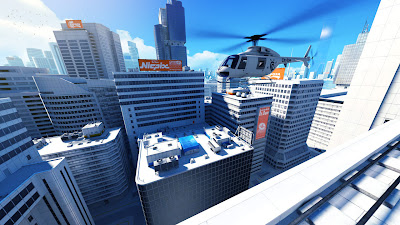 The game is at its best when Faith is running across rooftoops, jumping gaps, shimmying up the side of drainpipes, crashing through offices and out of the other side. These moments are frequent, but intercut by frustrating moments of the game screeching to a halt for some more tiresome combat, or lengthy sequences in railway tunnels where you have to move cautiously to avoid getting run over by trains.

The story is slight, but told well through some wonderfully-animated minimalist cut scenes. Superbly, the game isn't a 'bring down the system' story but something more realistic, with much more achievable objectives (expect the sequels - if there are any, as Mirror's Edge 2 sounds like it'll be a prequel instead - to go down more the path of overthrowing the government). The length - about six hours - is more of an issue, though there are also a number of time challenge maps which extend interest. Fortunately, the game is five years old now so it can be found pretty cheap.

Mirror's Edge (***½) is a small, curious game which packs in a huge amount of atmosphere. It often feels like the prototype for a much bigger and more interesting game (another comparison to the original Portal), but is certainly playable and fun in its own right. The game is let down by some compromised design decisions regarding combat, but its ambition elsewhere is laudable. The game is well worth a look, though its slightness means you shouldn't think of paying full price for it. The game is available now in the UK (PC, X-Box 360, PlayStation 3) and USA (PC, X-Box 360, PlayStation 3).
Posted by Adam Whitehead at 14:02

One of my favorite PS3 games. I usually hate speedruns and time trials, but I ended up doing them all as I really enjoyed the parkour gameplay. I can only hope that ME2 keeps the same formula and doesn't tack on some lame multiplayer mode.

It was a good, interesting game but far too short. There just wasn't enough meat to it and that hurt it. Hopefully, the coming remake will not make the same mistake.