According to British tabloid The Daily Mail, that is. They've been wrong about this sort of thing before. However, there's also been talk of some big Doctor Who news that's been under an embargo for the last few days and this would certainly fit. 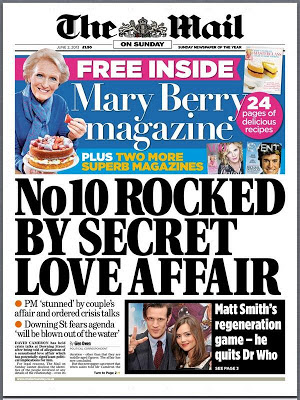 If true, when exactly Smith would depart is unclear. The BBC had previously reported that he'd be on board for the eighth season, which is planned to air in 2014. Whether this remains the case - or indeed if the story is a load of old bobbins - remains to be seen.

Update: The BBC has confirmed the news. Smith will regenerate in the Christmas special this year (not the 50th anniversary special in November). His replacement has not yet been named.
Posted by Adam Whitehead at 21:16

Email ThisBlogThis!Share to TwitterShare to FacebookShare to Pinterest
Labels: doctor who, news, rumours

could the Dr find his way to westeros in the future, how do you reckon he'd look with blue or silver hair?