England, 1519. King Henry VIII rules England and is beloved by his people. His wife, Queen Catherine of Aragon, is popular and the king's chancellor, Cardinal Wolsey, is able and formidable in administering the country and defeating plots against the throne. Another of Henry's advisors is Sir Thomas More, a man of great conscience and integrity whose respect and friendship the king values. 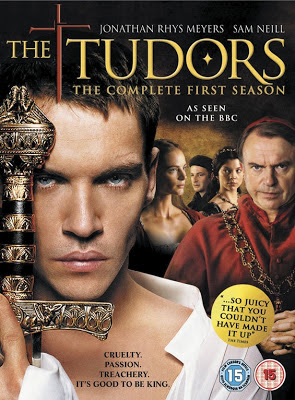 However, it is a difficult time in Europe. The Lutheran heresy is raging unchecked in Germany and the Pope is unable to defeat it. King Francis I of France and the Holy Roman Emperor Charles V are engaged in a deadly rivalry, both hoping to enlist England as an ally. With his queen - the Emperor's aunt - apparently unable to bear him a son, Henry also begins movements towards a divorce. When he falls in love with the beautiful Anne Boleyn, this matter becomes pressing and threatens a breakdown of relations with Rome.

The Tudors is a television drama produced by the Showtime network and based on the life on Henry VIII, focusing on his relationships with his six wives and the political and religious turmoil that resulted. The first season covers a period of roughly eleven years, running from the accession of Charles V as Holy Roman Emperor (in 1519) to the death of Cardinal Wolsey (in 1530). However, real historical events are compressed, combined or moved around in the timeline to read better as part of the drama. The contentious marriage of Charles Brandon to Henry's sister Mary Tudor (slightly confusingly changed to Margaret in the TV series) happened in 1515, but is moved to later on to create an interesting mid-season subplot, for example.

The Tudors plays fast-and-loose with the details of real history, but like HBO's Rome before it, the show does succeed in getting across the events and complications of the period. The complexities of Henry's relationships with fellow European rulers and the Pope are recounted well, as is the seething tension within the English court. As a very rough introduction to the history of the period, The Tudors works, though those interested in the real events are referred to the many history books about the time.

As drama and narrative, The Tudors is something of a mixed bag. The script is inclined towards the expositionary, with surprisingly little incidental flavour, and what there is is often questionable: a scene showing Henry VIII composing 'Greensleeves' is amusing but also cheesy and highly inaccurate (Henry VIII definitely did not write the music to the song and his authorship of the lyrics is questionable, at best). One of the strongest episodes in the season is the one where England is ravaged by disease, as it shows how Tudor England coped with such disasters and features more incidental scenes of life amongst the common folk than other episodes.

The acting is mostly good, with the likes of Nick Dunning (Sir Thomas Boleyn) and Henzy Czerny (the Duke of Norfolk) providing able support. Henry Cavill (Charles Brandon and, more recently, the latest actor to play Superman) is good as one of Henry's few true friends, though he arguably may have made a better Henry VIII himself. Maria Doyle Kennedy gives an excellent performance as Catherine of Aragorn, mixing palpable fear and worry over not being able to give the king an heir with pride and anger at the thought of being set aside. Natalie Dormer is given the hard job of portraying Anne Boleyn, the woman a king plunged a nation into anarchy for, and almost pulls it off. She is hamstrung by the indifferent script, especially as the story skips large chunks of their courtship and the precise reasons for the king's fascination with her are left somewhat ambiguous: in the TV show she simply appears to play hard to get, fascinating the king who normally just has to nod his head to get a woman into bed with him. Given their seven-year courtship and the intensity of Henry's feelings towards her, this feels rather inadequate as an explanation.

Central to this first season is Sam Neill, who plays Cardinal Wolsey with just the right mix of intelligence, political scheming and ruthless anger. Wolsey is presented as something of an antagonistic figure, but he is also shown to be a caring family man (Wolsey had a wife and two children) and to be utterly devoted to the king. As Wolsey repeatedly fails to get the annulment Henry wants, he becomes more desperate and Neill portrays Wolsey's descent with passion and intensity. Neill is possibly the highlight of the first season. Jeremy Northam also gives an excellent performance as Sir Thomas More, highlighting both More's well-known piety, intelligence and integrity but also his darker side, such as his commitment to burning heretics and Protestants at the stake.

Where the series falters - and it's quite a big misstep - is the casting of Jonathan Rhys-Meyers in the central role of Henry VIII. Eight years prior to The Tudors, Rhys-Meyers had played the coldly cunning role of Steerpike in the BBC's adaptation of Gormenghast, and bizarrely he seems to be playing Henry VIII in much the same manner. The real Henry VIII is noted for his charisma and vivaciousness, his force of personality sweeping up those around him. Whilst Rhys-Meyers certainly nails the king's intelligence, confidence and raging temper when thwarted, his performance is also often cold, desperate and occasionally whiny. I can understand the idea of subverting the traditional image of the fat, middle-aged Henry VIII by showing him as a young man in the prime of life, but Rhys-Meyers simply fails to get across the complexities of the real historical figure.

Fortunately, this is not quite as disastrous as it might be supposed: The Tudors may be about Henry VIII, but the series follows those around him more than the monarch himself, and the emphasis is on the court and period as a whole rather than on the one man by himself.

From a technical viewpoint, the series is well-directed. The use of CGI to flesh out the castles and stately homes of England is interesting and rather ahead of its time (and makes up for the fact that the show was filmed in Ireland, with limited or no access to some of the real locations portrayed in the series), though also sometimes distracting. Early in the season we have relatively brief camera shots of locations that try not to dwell on their computer-generated nature. Later in the season we have rather distracting rapid camera movements and broad shots of locations which are clearly CGI and artificial (and whilst the CGI is good for 2007 and the show's limited budget, it's still not great), creating a bit of a dissonance once we switch to the live-action scenes.

The first season of The Tudors (***) is flashy, fun and enjoyable but also lightweight. The lack of historical accuracy is not a major problem - the show at least portrays the real events, if not always in the right order or with the correct details - though the uncharismatic performance of the lead actor and a sometimes indifferent and flavourless script certainly are. Luckily, most of the other actors are excellent and as a rough introduction to the time period and events, the show does work. It is available now on DVD (UK, USA) and Blu-Ray (UK, USA).
Posted by Adam Whitehead at 11:55

Myers' depiction of Henry has inspired a King's mannerisms, etc in my own series. Not "King Henry the VIII" but the actor playing him.