Map of the HOMEWORLD galaxy

Deviant Art user Norsehound has created this excellent map of the Homeworld galaxy, from the games Homeworld, Homeworld: Cataclysm and Homeworld 2. 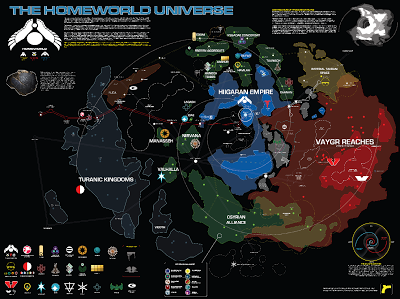 Check out the high resolution version of the map here.


Players of the game will know that the Homeworld series takes place in Messier 51, better-known as the Whirlpool Galaxy, located 23 million light-years away in the constellation of Canes Venatici. The game opens with the inhabitants of the desert world of Kharak discovering they are not native to their world and excavating the spacecraft which brought them there thousands of years earlier. The people of Kharak recover the spacecraft's hyperspace core and use it to power an expedition to discover their true homeworld. Unfortunately this act triggers an attack by alien forces which leaves Kharak burning and a few thousand survivors have to make their way across a hostile galaxy to safety.

Gearbox Software recently bought the rights to the Homeworld IP and have indicated that they are planning to bring the existing games to modern digital platforms as well as at least exploring the possibility of making a fourth game in the series.
Posted by Adam Whitehead at 11:36