England, 1533. King Henry VIII is anxious to formally annul the marriage to his first wife, Catherine of Aragon, and to wed Anne Boleyn in her stead. However, the Pope remains adamantly opposed to both the union and the king's reforming of the Church in England. As a major schism looms, the king finds himself at odds with some of his most loyal friends and supporters, including Sir Thomas More. 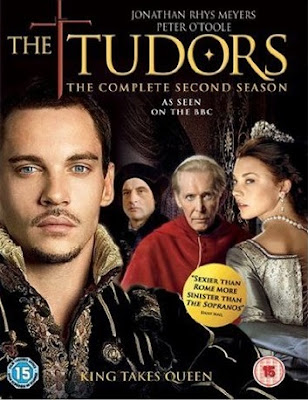 The second season of The Tudors covers what is generally considered to be the most pivotal period in the life of King Henry VIII, extending from his marriage to Anne Boleyn to the latter's fall from grace and execution just three years later. This period includes the separation of the Church of England from Rome, the martyrdom of Thomas More, the birth of the future great Queen of England Elizabeth I, and the rise to prominence of Jane Seymour, who is destined to become Henry's third wife. It's a rich period of history, dramatised many times (but arguably most famously in the play and film A Man For All Seasons, which focuses on More). The Tudors, due to its wider scope, has the ability and freedom to take this story and integrate it into a wider dramatisation of Henry VIII's entire reign, which has positive and negative consequences. Negatively, this is arguably the heart of Henry VIII's story and what comes after cannot help but be anticlimactic in comparison (though the producers of the show certainly give it a go). On the plus side the great time afforded the story by a television series means that the show can do some very interesting things, like devoting the entire final episode of the season to the hours leading up to Anne's execution, a move which succeeds splendidly and gives us what may be the best episode of the series.

A noticeable gap in the cast is that of Sam Neill, whose character of Cardinal Wolsey died at the end of the first season. The less-well-known James Frain has to step up as his effective replacement, the ruthless reformer Thomas Cromwell, and does an excellent job. The show also brings in the legendary Peter O'Toole as Pope Paul III, mainly to show the reactions to Henry's policies in Rome. This is a bit of an odd move, as this storyline never really goes anywhere. The Pope commands King Francis I of France to invade England, an ominous development which is subsequently ignored, and is later shown having frustrated episodes over the work of Michelangelo in the Sistine Chapel. Amusing, but it forms a digression that might have been better spent in England fleshing out the existing, more prominent characters. O'Toole is, of course, brilliant, but his presence in this role does feel a little bit of a waste of a major casting coup.

Natalie Dormer continues doing excellent work as Anne Boleyn, and has the difficult task of portraying the queen's descent into paranoia as she suffers miscarriages and earns the king's enmity. The show adopts a sympathetic approach to the queen, showing her to be distressed by her inability to bear the king a living son and innocent of the charges brought against her (though heavily indicating that she may have been promiscuous as a youth before meeting the king). Jeremy Northam also does good work as Sir Thomas More, the man of conscience and integrity who tries to balance his belief in his faith with his love for the king and dies for it.

In the central role of Henry VIII, Jonathan Rhys Meyers shows early signs of improvement over his inert Season 1 performance. This may be attributable to his decision to 'do a Riker' and grow a beard between seasons. Unfortunately, the beard is rather unimpressive (a quarter-Riker at best) and his performance soon returns to a binary state of either being coldly inscrutable or insanely furious. Scenes which require him to smile or be jovial feel forced and unconvincing, and the less said about the spontaneous way he meets and immediately falls in love with Jane Seymour the better. The whole storyline with Jane Seymour is rather badly handled, with the show deviating even further than it normally does from history (Jane had been at court for a year before Henry and Anne even married) and treating the relationship rather tritely, despite Anita Briem's best efforts with the material.

On the plus side, Henry Cavill improves significantly this season as the king's best friend, Charles Brandon. He shows Brandon's growing maturity as he casts aside his philandering ways to concentrate on his family life, in contrast to Henry's constant flitting between mistresses, and also his growing spiritual crisis of faith at the things he has to do in the name of the Reformation. This is a theme that continues into the third season.

Overall, the second season of The Tudors (***½) is much as the first: it's tosh but watchable tosh which gets a lot of the details of the history wrong but does succeed in nailing the broader picture. However, the second season is elevated over the first by the richer, more dramatic events being depicted and some improvements in both writing and acting. It is available now on DVD (UK, USA) and Blu-Ray (UK, USA).
Posted by Adam Whitehead at 15:36

Call me crazy, but I actually think s3 and 4 are the best seasons, though s2 tells the most famous part of the story.