Queen of Nowhere by Jaine Fenn

The Sidhe, who once enslaved and ruled all of humanity, have returned and inserted themselves into key positions of power right across human-controlled space. Only a few are aware of their return, and the data expert Bez is working hard to bring about their downfall. Her plan requires perfect timing, the recruitment of trustworthy allies and, if necessary, blackmail. But when her strongest ally apparently betrays her, Bez is left to face the Sidhe alone. 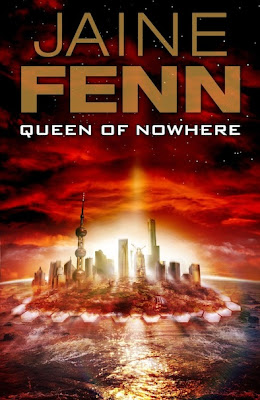 Queen of Nowhere is the fifth novel in the Hidden Empire sequence. This sequence is interesting because it tries to be a fairly tightly-serialised space opera whilst trying to make each book a stand-alone, with the focus moving between different groups of characters. Queen of Nowhere brings Bez, a fairly minor character in the earlier books, into sharp relief (Jarek, Taro and Nual, our 'regular' protagonists, are relegated to bit-players in Bez's story). Compared to the frequent point of view changes and shifting between planets of the previous volume, Bringer of Light, Queen of Nowhere benefits from a tight focus on Bez and her storyline.

That said, Queen of Nowhere also depicts events on a fairly large scale, some of them happening many light-years from where Bez is. The book's structure intercuts between Bez and brief scenes on other planets as members of Bez's network get ready for the decisive moment of action and their enemies try to protect themselves. It's an efficient structure which helps get across a big story in a modest page count.

Fenn's biggest weakness - her fairly prosaic, indifferent prose style - has been addressed, with more colour and strangeness in her descriptions. A visit to a planet with both segregation of the genders but also a relaxed attitude to sex is fairly vividly described. Her characterisation has also taken a big step forwards. Bez may be the most compelling protagonist Fenn has created so far, her very ordinariness and lack of material resources (despite her immense data-mining abilities) or superpowers being contrasted against Fenn's more familiar characters. Action sequences are handled with skill and there's a general feeling of improvement across the board.

The main weakness is that this is part of a series, despite the author's attempts to make things approachable for a newcomer. Indeed, newcomers may be frustrated by what they'll see as deus ex machina (such as Taro and Nual's Angel powers) whilst long-term readers may be disappointed by a lack of development on dangling plot threads from earlier in the series. The 'greater threat' which even dwafs the Sidhe and was introduced in Guardians of Paradise goes completely unmentioned, and there's certainly the feeling in the book's conclusion that we still have some way to go to reach the endgame, despite some elements being wrapped up in this volume.