The lands of the Celadon Highway are in turmoil. Civil war threatens the Khagante, whilst the city of Tsarepheth is consumed by a horrific plague. Far to the west, Temur and Samarkar continue their quest to find the fortress of Ala-Din and rescue Temur's former beloved, Edene. However, they are unaware that Edene has already left Ala-Din and acquired strange new allies of her own. 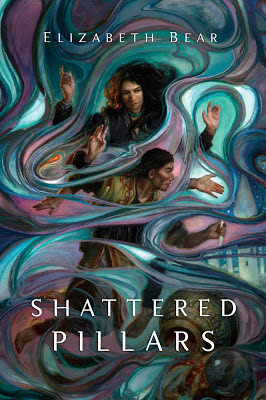 Picking up from the end of Range of Ghosts, Shattered Pillars continues Elizabeth Bear's intelligent, measured historical fantasy which melds elements of the fantastical with real history and even a few interesting nods towards science fiction. This is the middle volume of The Eternal Sky Trilogy and as such suffers a little from 'middle book syndrom'. There's no real beginning and the climaxes at the end of the book are somewhat muted (one major plot development amongst the Qersnyk feels quite rushed as well). After the excellently-paced Range of Ghosts there's also a slight feeling of sluggishness, as our major protagonists seem to spend a lot of time in two fairly similar cities getting involved in local politics and fighting off assassins before striking out to finally do what was planned some time before.

Still, all of Bear's other strengths remain intact. The characterisation is very strong, developing the existing characters in an interesting manner (especially Edene and the 'twins') as more minor characters from the first book (like Tsering) rise to prominence. Bear's use of the traditional epic fantasy narrative to challenge ideas about gender and 'barbarian' societies remains refreshing and is not over-laboured. A subplot about the company's horse even highlights the tiresome fantasy trope that horses are basically the cars of fantasyland and don't need to be fed, watered, rested and looked after, and approaches the subject more realistically. The end of the book also feels like it comes too soon, as the book is fairly short for a fantasy (less than 350 pages) and Bear's narrative leaves the reader wanting more.

Shattered Pillars (****) lacks the full impact of Range of Ghosts, but for the most part is a worthwhile and highly readable sequel. The novel is available now in the UK and USA. The final book in the trilogy, Steles of the Sky, will be published in 2014.
Posted by Adam Whitehead at 11:25