The second half of the third season of Game of Thrones is more inconsistent than the first. After the strongest five-episode run in the history of the series (seven, if you count the last two episodes of Season 2), the show suddenly screeches into fillersville and some of the worst excesses of Season 2 come back to haunt the viewer: characters wheel-spinning for episodes on end and lots of characters tramping around Northern Irish woods and vaguely hoping it looks like they are thousands of miles apart from one another. 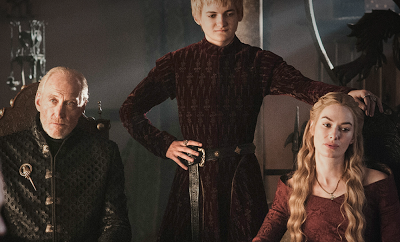 The Climb is the weakest episode of the season, though it still has some very strong moments such as the barbed confrontation between Olenna Tyrell and Tywin Lannister. Diana Rigg and Charles Dance bring their all to this scene of courtesy and threats and it pays off very well. The actual Wall-climbing sequences are visually hugely impressive, amongst the best things the show has ever done, but the saccharine final image and the uncharacteristically awful CGI in the final shot let down the hard work elsewhere. Aiden Gillen, whose performance as Littlefinger has been underwhelming throughout the whole series so far, gets a rare opportunity to shine in the role during his closing monologue, which is one of the more disturbing scenes the series has done. However, in the middle we have a whole load of random scenes thrown together to see what sticks, and it doesn't really work.

George R.R. Martin has written the two best episodes of the whole show so far, so it's a bit disappointing that The Bear and the Maiden Fair does not rank on the same level. It's solid, and certainly a welcome improvement on The Climb, but it lacks the oomph of his other episodes. The stand-out scene of the episode, Jaime Lannister's Big Damn Hero moment, was even moved over from another episode. Dany's confrontation with the Yunkish envoy is also very good (with some exceptional dragon CGI). Theon's appearance may be one torture scene too many for people (but fortunately the last one of the season), although it does confirm what the novels only later vaguely infer. Gendry standing in for Edric Storm is also a good example of a change from the books that is economical and makes sense, though the route Melisandre takes him to get back to Dragonstone - going hundreds of miles out of their way to King's Landing - does not. 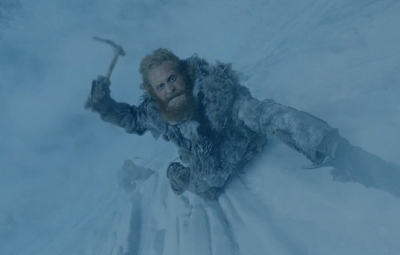 Second Sons is also pretty decent, with the titular mercenaries being well-introduced. Ed Skrein nails Daario's arrogance and it's good they dropped his flamboyant appearance from the books (one of the more unconvincing elements in the books is Daenerys falling for a blue-haired ponce), although I'm not sure going for the long-haired pretty boy look was a viable replacement. Tyrion's wedding is a suitably grim affair, the Dragonstone scenes are very well-done (Liam Cunningham is killing it this year as Davos) and the long-awaited 'Sam the Slayer' scene is handled well.

The Rains of Castamere is the most talked-about episode of TV drama this year, and it's easy to see why. The build-up to the infamous Red Wedding is handled well, with some great tonal variations (especially due to David Bradley's superb performance as the loathsome Walder Frey) and a late-building sense of dread. The concluding ten minutes is one of the best sequences in the history of the show, with Michelle Fairley, Richard Madden and Michael McElhatton all delivering stand-out performances. Both Jon and (thankfully) Bran's stories also suddenly kick into high gear. We also get a great action sequence as three of Dany's retainers storm the gates of Yunkai to great effect. Whilst it's not quite as well-paced and measured as And Now His Watch is Ended, it's not far off and of course the final scene is even more powerful and impressive. 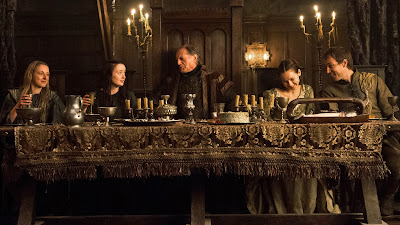 Mhysa, the season finale, has to settle for merely being a well-written epilogue. There's an interesting feeling of melancholy as certain characters cross paths for what might be the only time in the whole series (Sam and Bran, most notably) and others take hugely significant decisions (the Dragonstone scenes avoid repetition from earlier storylines and get Stannis's story onto a different track). Other storylines are let down by the promise of more filler and wheel-spinning: Arya looks set to spend most of Season 4 yet again traipsing around the Riverlands. Pairing her with the Hound for longer than in the book is a really good idea, but I'm not sure I can take a whole season of it. The revelation of Ramsay Snow's true name and nature, and Theon's final capitulation to his will is a terrific scene (though it doesn't quite justify the static nature of their story through the whole season), as is the brief ironborn sequence on Pyke. Unfortunately, another key scene - where Tywin lies the smackdown on Joffrey - is underwhelming, with none of the normally-reliable actors hitting the highs of the corresponding book scene. Some terrific and iconic dialogue, such as where Tyrion and Tywin share for a moment the horror that they may have put a new Mad King on the throne and Tywin ominously hints he won't let that come to pass, is also lost, which is a shame.

The most awkward moment of the episode is in Daenerys's storyline. After a strong and decisive start to her storyline this season, it just tails off at the end, not helped by that awkward crowd-surfing scene with its unintended-but-still-uncomfortable overtones of the great white saviour. This can be subverted by what's coming up in Daenerys's storyline, but for now it feels like a really weak way to end the season compared to the very obvious alternative option.

Forthcoming: Season 4 of Game of Thrones will start airing in March or April of 2014. Season 3 should be released on DVD and Blu-Ray in February or March 2014.
Posted by Adam Whitehead at 12:43

The obivous alternative isn't so obvious to me :) You mean the lady in the water, right?

Wow, I'm a reader of Ice and Fire, but the obvious sailed right over my head! Feeling dumb...

In any case, I also felt this season, the strongest one, was very hit and miss on individual episodes. Despite the improvement in the Jon Snow story line, I continue to not care too much about it in the show. In the books it was extremely compelling, but it hasn't translated well for various reasons.

"The Climb" was admittedly the weakest episode of the season, but in contrast with Season 2's drastic ups and downs, it wan't that bad.

In Season 2, we'd have great moments from the books interspersed in the same episode with some deviations that didn't work out too well; i.e. they were trying too hard to keep the ENTIRE growing ensemble cast in every episode; they self-admittedly learned from this mistake in Season 3 and were more bold about just giving characters an off-week instead of inventing pointless filler just to give them screentime in a given episode.

Thus, nothing in "The Climb" was bad in the sense of filler like that; we honestly need spacing between major events and to see the plots set in motion. Yes, the Jon Snow storyline was better in the books; didn't hate the TV version, Wall climbing scene was great, but not an actual "negative". The Ramsay and Theon scene really wasn't that long but I thought it worked (particularly because he was actually *flaying* him for once instead of other tricks). Otherwise, they had to spend time establishing what Jaime and Brienne are going to do next, what the situation with the Freys and marrying off Edmure is. None of these scenes felt like "padding" or "for the sake of inserting the character" the way some bad scenes in Season 2 used to. All around these were at least good, if moving the plot along.

The bulk of the episode were the political machinations regarding Sansa's potential marriage in King's Landing; we had to see the fallout from the Tyrell's plan being dashed. Went on a *bit* long, but this wasn't just a scene for the sake of a scene; its the buildup to the marriage in "Second Sons".

So I wouldn't say the Climb had any one scene in it that was actually outright "bad"....it was just a long setup for the events of "Second Sons" or later episodes. They had economy of writing, nothing particularly dragged out, so I'm not complaining.

Meanwhile yes the Bear didn't quite match up to GRRM's earlier 2 episodes but was still okay; loved the Tywin-Joffrey scene, we haven't had one before.

Second Sons was even stronger meeting the new mercenaries and the whole wedding scene.

Then of course we got back to great stuff with Rains and Mhysa.

Overall, nothing was "bad" it's just...distributed on a frequency chart, there are bound to be some "lulls" just because a plot-twist battle sequence can't happen every episode. We do need some "setup" episodes.