The lands of Ferelden are threatened by a Blight, a horde of monstrous creatures known as darkspawn erupting from underground and destroying everything in sight. The Grey Wardens are charged with defending the land against the darkspawn. In alliance with the King of Ferelden, the Grey Wardens are assembling an army to face the Blight at Ostagar, but treachery awaits and it falls to the order's latest recruit to help save Ferelden. 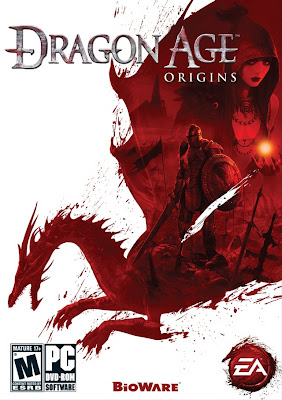 Dragon Age: Origins is BioWare's reflective look at their own origin (so to speak). It's a big, broad, swords and sorcery epic meant to evoke memories of the Baldur's Gate series, where BioWare got started in RPGs. It's also in 3D, with streamlined controls, inventory management and in-engine cut-scenes. It's BioWare's attempt to blend their original, more hardcore RPGs with their later, stripped-back and more cinematic games like the Mass Effect series. It's a game that tries to balance the old with the new and does not quite succeed.

Which is not to say it doesn't have a go. The game is huge, taking upwards of 50 hours to complete. Cleverly, the game reorganises its opening two hour prologue based on your race and class: a dwaven noble starts in a separate location to a human mage, with a totally different cast of supporting characters, enemies and opening quests. The fact that you can replay the game several times and get a different opening, with the various versions not aligning until you reach Ostagar, is quite clever and rewards replaying the game. Indeed, the choices in these sections reverberate throughout the whole game, with your eventual return to your starting location allowing you to address unfinished business. It's the game's main selling point and is something that is handled very well, making it all the more bemusing that the concept was completely chucked out the window for the two sequels.

As is traditional with BioWare games, your main character is fully customisable but the supporting cast are set in stone. You can accumulate up to ten companion characters throughout the course of the game and take three of them with you on missions. Your inactive party members hang out at a campsite you can periodically visit to exchange information, form friendships (and even romantic relationships) and improve everyone's equipment. The game has a reputation system for each character, and winning their trust will give you bonuses in combat and open up additional questlines. It's a nice idea but also one that's easy to neglect. The game also treats morally ambiguous sorceress Morrigan and sarcastic warrior Alistair as almost the secondary main characters, each with huge roles to play in the endgame, which is rather bizarre if you've just gone through 95% of the game favouring other characters instead. All of the companion characters are nicely-developed, though it's far from the strongest cast BioWare have produced for a game and some self-derivation can be detected: Shale is awesome, for example, but feels a little too reminiscent of Knights of the Old Republic's HK-47. 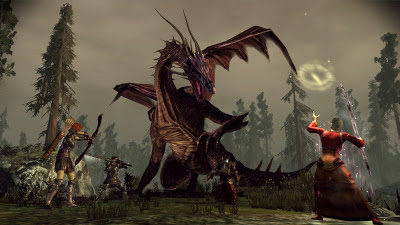 You spend the game doing what you usually do in a BioWare games: a broad variety of quests, varying from the mundane to the epic, and getting into lots of conversations and fights. A lot of fights: you seem to spend the overwhelming majority of the game in combat, and violence seems to be the solution to almost every problem in the game. There's a few quests based on diplomacy and dialogue, and a few fights can be avoided through intimidating or persuading the enemy, but otherwise be prepared to do a ton of fighting. Fortunately, the old 'hit space to pause' option is still present and correct, allowing you to assign orders to characters and take stock of the battle as it develops. A quickbar allows easy access to abilities, spells and weapons. Combat is generally satisfying, although health spells feel a little weak (at high level they restore so few hit-points it's almost not worth bothering with them). The biggest weakness is positioning: enemy units can clip or shove past your units with ease, making it impossible to create bottlenecks in corridors and engage the enemy with warriors whilst wizards and ranged fighters engage from afar. This seriously limits tactical options and can make fighting large numbers of tough enemies particularly difficult. Some abilities also feel overpowered: the enemy's ability to encase your characters in null-magic zones where healing magic simply does not work can result in total party wipe-outs all too easily.

In technical terms, the game is okay. Graphically it looks solid on PC (but a bit washed-out on consoles) and mods are available to improve textures further. The game is a bit flaky on multi-core PCs but runs fine if you assign it to run on just one core. Camera control is a bit of an issue: the PC version allows you to play the game from an overhead viewpoint (reminiscent of Neverwinter Nights except, bizarrely for a seven years-newer game, far less customisable) but you can't zoom out very far, and enemies often engage you from outside this viewing range. Switching to the over-the-shoulder view (which the consoles are limited to) is great for spotting distant enemies and engaging them at range, but is useless for melee. You can switch between them easily enough, but it feels a bit annoying you can't stay in the viewpoint you favour throughout the game. The overhead view also sometimes seems to get confused on whether it should be 'locked onto' your selected character or allowing you to free-roam.

The writing is a mixed bag. A lot of dialogue in the game is obvious, expositionary and risible, not helped by severely variable voice acting (Claudia Black is the standout as Morrigan). There are attempts at nuanced characterisation - key villain Loghain has his reasons for doing what he's doing, though he's such an unrepentant martinet that most players will feel zero sympathy for him - but they mostly fall flat. The game also makes a nod towards gritty realism through its political infighting and bloody combat, though the game goes completely over-the-top with your characters walking out of fights covered head-to-foot in gore. The political angle also doesn't work very well due to the politics being rather boring and it's difficult to care about Ferelden when you spend most of the game hearing about how isolationist and racist it is, riven by internal conflicts with few genuinely good people in positions of authority.

Despite the clunky writing, poor camera controls and focus on violence as the solution to just about everything, the game just about manages to keep its head above water. It's satisfyingly huge and the worldbuilding is derivative (a mash-up of standard fantasy tropes with more than a bit of inspiration from George R.R. Martin) but somewhat interesting. The differing opening sections of the game give some good replay value. Combat is solid if unspectacular. There's a germ of a really good game here, but there's also an overwhelming feeling of blandness and predictability that rears its head all too often.

Dragon Age: Origins (***½) is a very solid game from BioWare, although it's self-reflection on BioWare's past is rather pointless: the Baldur's Gate series is still extremely playable and frankly on almost every front bar the technical one are better games than Dragon Age. For those simply after a big, enjoyable fantasy RPG, Dragon Age certainly fits the bill. Its ambition is impressive and even in failing to fully achieve it, it's still very playable and worth a look. The game is available now - in an 'Ultimate Edition' also including its expansion Awakenings and several DLC episodes - in the UK (PC, X-Box 360, PlayStation 3) and USA (PC, X-Box 360, PlayStation 3).
Posted by Adam Whitehead at 19:56

Yeah, it's a pretty solid game. The next one however is total tosh, its the first bioware game I have given up on. Played over half of it to give it a chance but it doesn't get any better. They have completely changed the games mechanics and feel, pretty much every change they made was for the worse.

I would rate Dragon Age 1 a little higher and totally agree to JohnB in regards to Dragon Age II.

They changed about everything there for the worse indeed and also the narrative structure underlying the game with a focus on the hero of Kirkwall through many years and jumping from highlight to highlight doesn't quite work out.

This game had great potential, but it was ruined by its dungeons : too long, linear and repetitive. I was intrigued by the multiple "origins", but dragging myself again through the Deep Roads or the Brecilian Ruins just to find out how the story plays out with a different character ? No thanks...

I just wish Bioware had spent a little less time and resources on cringeworthy romance and sex scenes, and a little more on dungeon design. But even so, it was much better than the sequel...

cannot agree. very strong setting [inspired by WH40k as well] and enough plot depth for a game.
camera is ok - in far third person view.
such a shame that upcoming DA3 will be more like DA2