More than twenty years ago, Walter Bishop set in motion a series of cataclysmic events by opening a doorway between this world and somewhere else. Those events have manifested as the Pattern, evidence of reality itself becoming malleable and where the rules of science have become less rigid. As Fringe Division continues its attempts to discover the secrets of the Pattern, the consequences of Walter's decision make themselves felt, with possible dire ramification 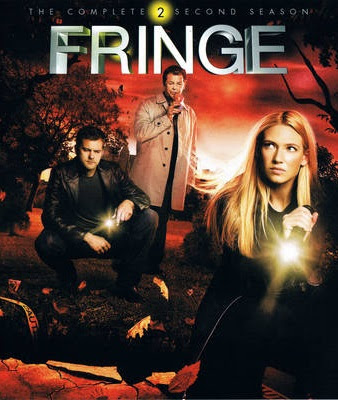 Fringe's second season picks up moments after the ending of the first season, with Olivia Dunham (Anna Torv) transported to another world. In an interesting dramatic choice, the writers do not immediately focus on Olivia's adventures on the other side, instead concentrating on the impact of her absence and unexpected reappearance on the more familiar characters. It's not until several episodes into the season that we get a flashback to the events of the Season 1 finale and learn more about what's going on. In the meantime, with the show wearing it's X-Files inspiration more blatantly than ever (for the first few episodes at least), our team have to face off against a group of shapeshifters from the other side.

The second season of Fringe still unloads a few solid stand-alone stories to the audience (most notably a quarantine drama set in an office block ravaged by an unknown disease), but the focus is much more closely on the serialised elements relating to 'the other side', Walter and Peter's backstory, the experiments run on Olivia when she was a child and how much the megacorporation Massive Dynamic know about what's happening. We get a new recurring bad guy in the form of Thomas Jerome Newton (an amiably villainous performance by Sebastian Roche), whose opposition to the Fringe Division's efforts creates much of the tension for the season.

As with the first season, the cast continues to deliver excellent performances, particularly Kirk Acevedo as FBI Agent Charlie Francis, who is given a meatier role in the opening and closing episodes of the season. The stand-out, of course, remains John Noble as Walter Bishop. His performance in the first season was already remarkable, but over the course of the second season it apotheosises onto the 'Patrick Stewart in Star Trek: The Next Generation' level of sheer dominance. Whether it's playing his traditional befuddled scientist role, lapsing into trauma at the memory of a two-decade old tragedy or temporarily regaining his old memories and becoming cold, arrogant and condescending, Noble plays his part to perfection, winning the audience's sympathy or, for his more morally dubious acts, at least their understanding.

The season reaches a huge emotional and acting peak in Peter, the fifteenth episode of the season and a major 'gamechanger' of an episode. Told mostly in flashback (complete with a retro, 1980s style music and title sequence), it not only explains much of the series's backplot, but it also gives us a look at the man Walter used to be and establishes the motivations of several major characters in the show. This kicks off a run of high quality episodes which mess around with the established formula, including one episode that is a bizarre noir thriller (the result of Walter - on various substances - trying to tell a children's story) and another that is a solo adventure for Peter out in the backwoods of Washington State (and may be a homage to Twin Peaks). The season concludes with a two-part finale which is the most epic thing the show's ever done, featuring multiple castmembers in different roles, impressive visual-effects shots and the successful depiction of portraying a world that is familiar but different. The cliffhanger ending is a bit of a doozy as well.

The season does have a bit of a stinker in Unearthed, easily the weakest episode of the show to date. It was produced as part of Season 1 and held back to the second, putting it out of continuity and also rather out of keeping with the rest of the show: outright ghostly possession seems a stretch too far for the show, which whilst flirting with the paranormal usually manages to provide at least an attempt at a pseudoscientific explanation for events. Luckily, the DVD and Blu-Ray release hides the episode in the 'special features' section, pleasing completists whilst also ensuring it isn't accidentally stumbled over whilst watching the main body of the season.

Overall, the second season of Fringe (*****) takes the excellent cast and premise of the first season and boots it onto another level, with exceptional acting (especially from John 'Criminally Emmyless' Noble) and some clever, coherent storytelling. The season is available now in the UK (DVD, Blu-Ray) and USA (DVD, Blu-Ray).
Posted by Adam Whitehead at 18:03

FRINGE's second season had an insane amount of freak of the week BS that had nothing to do with the master story. Things started coming together at the end, yes, and that was a fun finale block, but that's a long 23/24 episodes to work through to get there.

Still an enjoyable show, though. Just really surprised you're giving it such a high score.

But I agree on Noble's work. The man is insanely good on the show.

Noble's performance MAKES this show. It's a good enough show on its one, but really, who doesn't tune in to see what Walter's up to?

I have to say, Fringe is one of the very few shows that I've ever watched where almost none of the episodes are filler episodes. There are a couple, I won't deny it, but from what I've seen, most of the episodes you think are filler epsidoes end up being revisited in later seasons and you find out way more about the relevence of them all. I love that!