Back in 1993 Bullfrog released what may have been their finest game: Syndicate. In the game you controlled a team of four cyborg agents from an overhead perspective. They would go from massive cyberpunk city to massive cyberpunk city, carrying out missions that would help your corporation go from a modest start-up to a world-straddling conglomerate. The game was noted for the presence of large numbers of civilians, its living cities (complete with cars, trains and police), its atmospheric soundtrack and its huge arsenal of weapons. The game was also noted for its differing approaches: you could charge through all guns blazing, adopt a stealth approach of using long-range sniper weapons and hiding, or taking control of masses of civilians with a 'Persuadertron' device and using them to rush the enemy with overwhelming numbers. You could also research new technology and make more money between missions from a strategic gameplay mode. 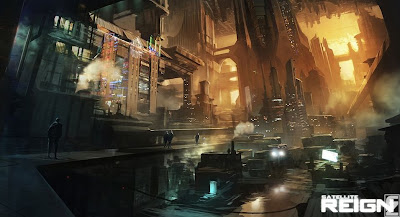 The game spawned an expansion, American Revolt, and then a sequel, Syndicate Wars, in 1996. The sequel was similar, although it removed the limitations of having finite ammo and made all of the buildings in the game fully destructible. In 2012 Starbreeze Studios issued a new game called Syndicate, but this was an FPS lacking anything in common at all with the originals apart from some weapon names. Though on its own terms an okay shooter, the game was heavily criticised for lacking the intelligence and strategic gameplay of the original.

The creators of Syndicate Wars are now Kickstarting a 'spiritual successor', named Satellite Reign in homage to a weapon in Syndicate Wars (the Satellite Rain, which called in a laser strike from an orbiting armed satellite). The new game is similar, with again you using four agents from an overhead perspective. Rather than multiple cities, there is now one huge city and your agents can work for both moral and amoral corporations. Your four agents are also now more specialised, with some RPG elements creeping in.

"Satellite Reign is a real-time, class-based strategy game. You control a squad of four agents, each with distinct and unique abilities as they vie and battle for control of a fully simulated, living, cyberpunk city.

The game world is designed to facilitate emergent gameplay, giving you the tools and freedom to play how you want to play, so you can create strategies and scenarios that not even we had anticipated!

Customise your team with the strength to destroy your enemies head-on, or hack into their facilities to manipulate their infrastructure without them ever knowing you were even there.

Will you take down your enemies with brute-force? Covert espionage and infiltration? Or will you use propaganda to influence the citizens of the city and overthrow the controlling powers?

Satellite Reign will be released on Windows, Mac OS and Linux."


The team are asking for $350,000, which is fairly modest by Kickstarter standards. Their website is here.
Posted by Adam Whitehead at 12:20

Satellite rain was a kinetic bombardment with tungsten rods! Hence the name and all.

Adam, is there any reason it's a Brisbane studio, but you have to donate in pounds? Are they based in old blighty?

Anyway, they got my money. Many fond memories of Syndicate from back in the day.