Twenty years ago, five school friends set out to do the 'Golden Mile', a pub crawl taking in a dozen pubs in their home town of Newton Haven. They didn't quite make it. Now Gary King is determined to complete the crawl and rounds up his former mates. But once back in their home town, they discover that things aren't quite what they seem... 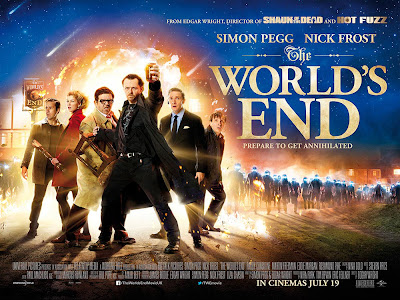 The World's End is the concluding film in the Three Flavours Cornetto Trilogy, following on from Shaun of the Dead and Hot Fuzz. These films have different characters but a recurring cast and are the creations of Simon Pegg (writer, lead actor) and Edgar Wright (writer, director), supported by Nick Frost (actor). Each film is based around a colour which represents the movie's genre and theme as well as being a flavour of Cornetto: red for Shaun (representing blood and the horror genre), blue for Fuzz (representing the police and the buddy cop/action genre) and now green for World's End. Finding out why the film uses the green colour is part of the fun.

The film is the first collaboration between Pegg and Wright in six years, with both having been busy in Hollywood in the meantime. Pegg has worked on the Mission Impossible and Star Trek franchises and written his own stand-alone SF flick, Paul (also co-starring Frost). Wright helmed the hyper-kinetic, gloriously entertaining Scott Pilgrim Vs. the World and has been developing an Ant-Man movie at Marvel. The break has done them both good, with the result being a film that trades less on past glories (aside from the fence gag and the Cornetto motif, there are no returning jokes or sly shout-outs) and stands more on its own two feet. What it does take from its forebears, however, is structure and tone.

Like Hot Fuzz, The World's End centres on a tonal shift which transforms it from one type of film into another. In Hot Fuzz, this moment came about three-quarters of the way through the film when it transformed from a Wicker Man-style rural horror film into a Michael Bay blockbuster, but the film pulled it off through excellent foreshadowing. The World's End's corresponding moment comes in the toilets of the fourth pub, about a quarter of the way into the film, and is less successful: we've known the characters for a lot shorter period of time and the shift is not adequately foreshadowed. The move from surprisingly effective character drama to balls-out action flick is not as well-handled as in Hot Fuzz and the credulity-straining premise of the film is further eroded by the decision our heroes make to complete the pub crawl in the face of all logic. It's a bit like that bit in Shaun of the Dead when Pegg and Frost decide to hole up against the zombie hordes in the pub which doesn't entirely make sense, but you kind of go along with it because it's one thing and the result is uproariously hilarious (most notably, the pool cue accompaniment to Queen's 'Don't Stop Me Now'). The World's End instead has to justify its premise eight times (each time they leave a pub and the situation has escalated further) and the results are only moderately amusing.

In fact, The World's End is at its best when the crazy SF stuff is forgotten and we're focusing on the character interrelationships. The five friends are convincingly portrayed. Particularly successful is the way that Gary's unhealthy obsession with the past and how it has increasingly dominated his thoughts the more his adult life has descended into failure, poverty and addiction is both bleak and exceptionally well-played by Pegg; this is Pegg's finest performance since Hot Fuzz and maybe his finest performance ever. It's certainly Frost's, as for once he plays the straight man to Pegg's more erratic lead and does so with a surprising level of maturity. Sadly, this strong performance tails off towards the end of the film when Frost's character falls off the wagon and he reverts to a more familiar 'funny fat guy' routine. Martin Freeman, Eddie Marsan and an excellent Paddy Considine all provide able support as the other members of the childhood gang. More wasted is Rosamund Pike as the nominal love interest, who gets very little to do.

The SF stuff is rather more unbelievable, with little effort to integrate it into the reality of the film (as with the zombies in Shaun of the Dead). In fact, the SF stuff rapidly becomes a bit of a chore and a distraction from the real story, which is what's going on with Gary. Even the characters seem to feel this way, with a five-minute fight scene with the 'bad guys' ending and the cast immediately returning to interrogating Gary about what's going on in his head. Oddly, this is an SF film where the SF stuff is an unwelcome deviation from the more mundane, character-based drama and relationships. This is The World's End's biggest failure, as both Shaun and Hot Fuzz used their outlandish events to reinforce the drama and characters, whilst in The World's End they merely distract.

That said, what The World's End does have is a really great ending. It doesn't wimp out and the ending integrates the two sides of the film together more successfully than anything up to that point. Indeed, of the three films in the trilogy The World's End is the only one that feels like it could have a really good sequel.

The World's End (***½) is the weakest film in the trilogy, although even in failure it still provides some great laughs and some interesting characters. It is a lot better than Paul, for certain, and seems to prove that Simon Pegg is at his best in collaboration with Edgar Wright. Hopefully it won't be so long before they next team up. The film is on general release now in the UK and next month in the USA.
Posted by Adam Whitehead at 15:54