Maps for THE WORLD OF ICE AND FIRE

It's been confirmed that the map artist for The World of Ice and Fire is Michael Gellatly. Gellatly has set up a new website and posted some teaser images for his work on World, though only bits of maps or heavily obscured images for copyright reasons. 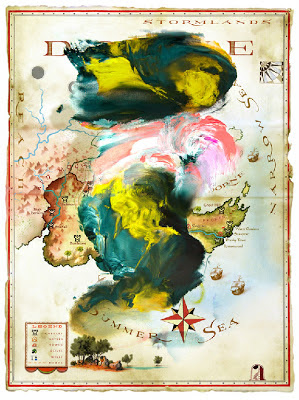 We're still hearing that The World of Ice and Fire may be released in April or May of 2014 to tie in with the fourth season of Game of Thrones. However, until this is confirmed the official date remains November 2014.
Posted by Adam Whitehead at 15:43

Email ThisBlogThis!Share to TwitterShare to FacebookShare to Pinterest
Labels: a game of thrones (TV series), a song of ice and fire, elio garcia, george r.r. martin, linda antonsson, maps, the world of ice and fire