Seven years ago, the warrior-assassin Caine - played by Actor Hari Michaelson - saved his lover Pallas Rill and became a hero on Earth and infamous on Overworld. In that final battle Michaelson was severely wounded and can now only walk intermittently, with technological help. When Michaelson discovers that a devastating virus has been unleashed on Overworld from Earth, he immediately intervenes to stop it...and unleashes a terror upon both worlds in the process. 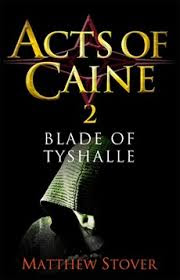 Blade of Tyshalle is the second volume of The Acts of Caine series (four books so far) and is a quite startling deviation from its predecessor, Heroes Die. Whilst Heroes Die was an intelligent, smart SF/fantasy hybrid novel with lots of action, Blade of Tyshalle is an outright philosophical assault on the senses. This is a murkier, more violent and darker book than its predecessor, but also one that is more demanding, smarter and less interested in spelling things out. It is, on almost every front, a step-up from the first book in the series.

In terms of characterisation, the book is highly impressive. Michaelson/Caine himself is a deceptively straightforward figure. When he has an objective, he does whatever is necessary to achieve it. When he has everything he wants - a family, a great job, fame and fortune - he is utterly miserable. When the world sets itself against him (or, in this case, two worlds and almost everyone on them), he shines. When he has the freedom to forge his own destiny, he flounders. It's the classic mid-life crisis narrative, made even harsher by the fact that Michaelson is partially crippled. There's something inherently tragic in the fact that Michaelson's closest friend is also his deadliest enemy, the exiled Emperor Ma'elKoth. Caine is against the odds but also certain to win through because that is the task he sets himself. Some reviews have taken this to mean the book is pro-fascist (The Triumph of the Will could be the title of Caine's biography) but Stover undercuts this by showing that Caine cannot achieve his goals without him relying on his friends and allies (and some of his old enemies).

The book is unusual in that the first-person narration parts of the book are split between Caine and his old friend Kris. The book opens with a tantalising glimpse at Michaelson's youth as he first enters training as an Actor and Kris is assigned to stop him flunking out. The experience changes Kris forever, leading to a fateful decision and a reunion many years later in the main narrative of the book. The rest of the cast is a mixture of returning characters from Heroes Die (such as Shanna, Ma'elKoth, Kierandal and Majesty) and newcomers such as Raithe, a Monastic citizen who harbours an old grudge against Caine. Stover juggles them all with skill. 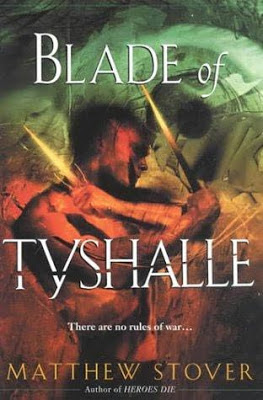 In terms of the antagonist, Stover does something very interesting by making it more of a force of nature and philosophy than an actual villain (though it is personified when it possesses the body of an old enemy of Caine's). This leads to the book's most stomach-churning sections as this force for evil kills and slaughters on a scale that is quite shocking. The book also muses on the theme of rape, not of the body (though this is implied in several moments), but of the mind. The destruction of consciousness, the stripping of identity and the nature of self are all dwelt on as concepts.

Stover pulls back from these philosophical moments - though the book remains intelligent and sharp-witted throughout - to deliver a finale which may redefine the term 'apocalyptic'. The final 200 pages of the book feels like experiencing the Vietnam War on fast-forwards. It's relentless, grim and action-packed. It probably goes on a little too long - at 725 pages of small print in tradeback the novel is substantially longer than Heroes Die - and there's a few too many endings as Stover tries to wrap things up fairly conclusively, but ultimately it's an ending to be remembered.

Blade of Tyshalle (*****) is a vastly more ambitious book than its predecessor which pulls off what it's trying to do. Action, philosophy and characterisation are blended to create what may be one of the outstanding examples of the fantasy genre in the last decade. Blade of Tyshalle is available now in the USA and as an e-book only edition in the UK.
Posted by Adam Whitehead at 11:00

I'm glad you enjoyed it, but "a little too long"? There is no doubting Stover's brilliance, but when I read BofT I felt it very badly needed substantial editing. Not only the length (plot sprawling as though Stover were making parts of it up as he went along) but also the haphazard punctuation.

I did love Heroes Die. BofT left me unable to face Caine Black Knife, although perhaps it's time to go back …

I really like the second cover in the post, but what a shame about the rereleased ebook covers...

I've read Stover from when he first was published and have never understood why he isn't seen as being in the top echelon of fantasy writers. It's a crying shame that a whole lot of dross (unnamed to protect the innocent) gets praised to high heaven while it is only now that his books get the attention they deserve. It appears you have to have mates in the blogging community to get your name up in lights...

Stover's been praised quite a bit by various bloggers and on quite a few SFF websites over the years.

I think the problems are more to do with the length of time between books (4 years, 7 years and 4 years), which have prevented him from building a good head of steam, and the Amercian publishers allowing the previous books to go out of print, even when the new ones come out. Also, the lack of international publication has been an issue.

The end of this book had me grinning from ear to ear for about a week.

Very glad these books are (so far) working for you Adam.

The fact that the books in the series were going out of print in the US was a silly issue on the publisher's behalf.

The reason Stover doesn't get more publicity (for lack of a better word) for how good these books are is because his publisher never got behind them. Not long after Heroes die came out, the publisher got the rights for Star Wars novels and assigned him to that. That's obviously a huge opportunity, but that franchise sells itself, rather than the individual writers who craft it. So he was, in a weird way, overshadowed by his own work.

Heroes Die is as good of a speculative fiction work as there has been by anyone, anywhere. The following 3 range from good to great (Tyshalle is on the great end) but it is VERY heady stuff and not for everyone. I think if I had read them when I was younger and more prone to contemplate deeper themes I would have enjoyed them more rather than now when I am older and just want something to entertain me in my free time.