England, 1540. King Henry VIII has married Catherine Howard and seems to have finally achieved a level of happiness. The execution of Thomas Cromwell has left the government firmly cowed by Henry and the religious Reformation of the country in his hands. However, Catherine's past is colourful and she soon finds old 'friends' creeping out of the woodwork, determined to use her to their own advancement. When Catherine's flighty and irresponsible behaviour irritates and distances Henry, she also finds herself drawn into a dangerous affair. 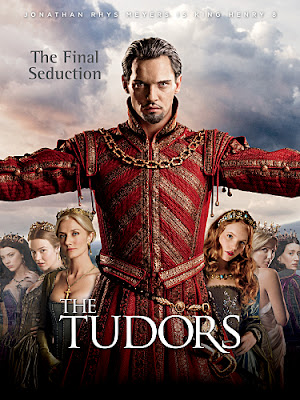 The fourth and final season of The Tudors picks up with Henry VIII on his fifth and penultimate wife and covers the last seven years of his life. Aside from the controversial life and death of Catherine Howard, this period is most notable for Henry's decision to invade France and besiege Boulogne. These elements are characterised in the TV series as a form of mid-life crisis: all it's lacking is the decision to buy a Harley or an impractical and overpriced open-topped convertible. This is an amusing idea but also one that lends itself to an air of melancholy: as Henry's old leg wound worsens he knows his death is coming and he sets about preparing for it. As old friends and allies also start passing, Henry is forced to consider his life and accomplishments, exemplified in the final episode when he starts having visions of his dead wives and questions whether he was right to divorce or execute them.

As with the previous seasons, The Tudors maintains a certain watchability in spite of its numerous problems and deviations from history. However, the series has definitely suffered from the loss of James Frain as Cromwell. David O'Hara (despite being only four years younger than the actor who played his father in Season 1) steps up as the Earl of Surrey and gives a menacing, charismatic performance but doesn't actually do very much. Henry Cavill rounds off his appearance on the show with a surprisingly effective melancholic performance as Charles Brandon also approaches the end of his life, enlivened only by a new romance. Sarah Bolger (finally promoted to the title sequence cast) is also excellent as Mary Tudor, walking a fine line between being sympathetic but also driven by her religion. For the wives, Tamzin Merchant is effectively flighty and irritating as Catherine Howard should be, but rounds off being a little bit too irritating. Also, the writers ill-advisedly keep the Howard/Culpeper affair storyline going for at least a full episode longer than is really necessary.

Once that's out the way, Joley Richardson gives a much more decent performance as Catherine Parr, Henry's final wife, and portrays Parr as a woman of much greater maturity and intelligence than her predecessor. There's some minor scheming as the reformers in the court find themselves wondering if Parr is religiously acceptable, but that peters out as Henry becomes focused on war instead. The battle scenes are surprisingly good, with the Siege of Boulogne emerging as the stand-out setpiece of the entire series. Afterwards, we're plunged back into minor court politics before the show finally ends.

As with previous seasons, Jonathan Rhys-Meyers is really not a great Henry VIII. He nails the king's intelligence but not his charisma, but with the addition of make-up to chronicle Henry's passing years he does seem to improve a little in this final season. At least up until the last two episodes, when he decides to adopt a bizarre and distracting deep voice (presumably under the mistaken impression it helps him sound older) which does not work at all.

That said, the fourth season of The Tudors (***½) does adopt a melancholic and reflect tone in the last few episodes as the king's life draws to a close which ends the series on a surprisingly sombre tone. Whilst The Tudors will never rank among the great historical dramas, it does do enough reasonably well to make it an effective (if far from perfect), basic account of the life of Henry VIII. The series is available now in the UK (DVD, Blu-Ray) and USA (DVD, Blu-Ray).
Posted by Adam Whitehead at 15:18