Cordelia Naismith of Beta Colony has married Aral Vorkosigan, the Imperial Regent, and is now living on Barrayar, the homeworld of her former enemies. Cordelia is bewildered by Barrayaran society, which is militaristic, elitist, feudal and unforgiving of physical infirmity or weakness. As she sets out to try to make a fairer life for her family and friends, they are all swept up in political intrigue and civil war when Vorkosigan's regency is challenged. 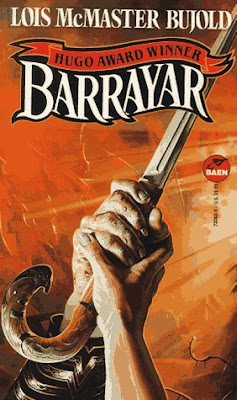 Barrayar is less the sequel to than the direction continuation of Shards of Honour, the first novel in The Vorkosigan Saga. This is understandable, as Bujold wrote them as one one long novel, but broke off before Barrayar was very far underway and ended up writing a whole bunch of other novels before getting back to this one. This sabbatical was for the good, as Barrayar is a significant improvement over the lacklustre Shards of Honour, featuring much more interesting characterisation and a more a gripping plot.

As before, the book is told from the POV of Cordelia and the book is focused heavily on her characterisation as she adjusts to life on a new world. Exploring Barrayar from the outside is a good idea, as Cordelia gets to express the reader's disbelief that such a techno-feudal society could even exist. There are some great moments as well where natives of Barrayar try to 'shock' Cordelia (such as with rumours of a gay affair between two male lords) with scandals only for her to find them bafflingly ordinary and inoffensive. It would be easy for Bujold to make Cordelia arrogant and superior about such things, but she plays fair and on one or two occasions Cordelia has to admit where her own world has gotten things wrong, and where Barrayar may have better ideas (though the reverse situation is much frequent).

In the first novel, Cordelia was stoic to the point of being emotionally inert, but in the sequel she is a much better-nuanced character who reacts more believably to events. Bujold never lets us forget that Cordelia is a trained and professional military officer, so her crisis-management skills and tendency to personally take part in dangerous missions herself are well-founded. The theme of motherhood is also explored, as Cordelia falls pregnant only for her unborn child to suffer injuries in an attempted assassination attempt. Barrayaran tradition would be to have the child aborted, but Cordelia causes a scandal by using imported Betan technology to save his life at the cost of leaving him crippled, to the fury of her father-in-law. The resulting tension may be obvious ('baby in danger' is a bit old-school for an SF trope) but it works quite well.

In the latter part of the novel, when open civil war erupts, Bujold's decision to stick with Cordelia as the POV character pays dividends. Normally in a big SF novel, the author would adopt a multi-POV approach, or stick with the characters in the thick of the action. Instead, Cordelia is cut off from the outside world and has to lie low in the countryside without a clue as to how things are progressing or where her husband is. This approach is purposefully frustrating, as we share Cordelia's annoyance at not knowing what's happening and it works quite well.

On the negative side of things, the focus on Cordelia compromises the characterisation of secondary characters. Aral Vorkosigan himself remains a fairly distant figure and Cordelia's staff get mixed treatment. Bothari is a sympathetic-but-tragic character with an edge of unpleasantness to him, making him a fairly complex and interesting character for the 'badass big arse-kicker' trope. Droushnakovi and Koudelka are likable characters but their inability to progress their relationship and their comedy of manners of constantly misunderstanding what the other person is doing briefly made me think I'd picked up one of the weaker Wheel of Time novels. Cordelia serving as counsellor and den-mother to her staff is an interesting idea, but it slows down the pacing at critical junctures. There's also the bigger problem that Barrayar is not really convincing as an SF society and is rather unpleasant. Though this gives us empathy with Cordelia, it also means that the intricacies and court politics of Barrayaran society come across as being rather flat. And probably the less said about the cliched villain, the better.

Barrayar (****) is a huge improvement over its forebear, featuring a far more interesting storyline, some accomplished worldbuilding (although of an unpleasant and unlikable world) and better characterisation of the protagonist, despite some more mixed results for the secondary cast. Barrayar is available now as part of the Cordelia's Honour omnibus, along with its forebear Shards of Honour (UK, USA).
Posted by Adam Whitehead at 10:29

Thank you for this review, I enjoyed it. One of the things to keep in mind about this novel was that Bujold created a world that was utterly different from almost anything else being printed at the time. Just about any other contemporary scifi space opera took place in the "California in Space" universe, so a world based upon Russo-French immigres was enchantingly fresh.