David Bradley is the new DOCTOR WHO (sort of)

David Bradley - most recently seen as the worst wedding host ever in Game of Thrones - is playing William Hartnell, the actor who played the very first Doctor Who, in a new docu-drama chronicling the show's creation. The first images of him in the role have been released and are spookily similar to William Hartnell's appearance in the first episode of the series, An Unearthly Child. This is all the more remarkable as Bradley is sixteen years older than Hartnell was when he filmed the episode. 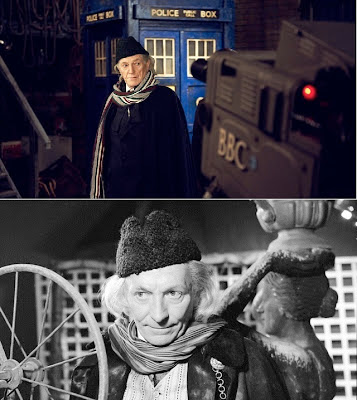 An Adventure in Space and Time will air in November as part of Doctor Who's 50th anniversary celebrations. It will chronicle how the show was created and got on-air. In addition to Bradley as Hartnell, Reece Shearsmith will play Patrick Troughton, the actor who played the Second Doctor. The two surviving castmembers from the first episode of the series cameo in the new drama in small roles: Carole Ann Ford, who played the Doctor's first companion and granddaughter Susan, and William Russell, who played companion Ian Chesterton. The episode is written by long-time Doctor Who scriptwriter and novelist Mark Gatiss.

Meanwhile, Doctor Who itself will be celebrating its 50th anniversary with a special, 'movie-length', episode to air on 23 November, the actual 50th anniversary. Details of the episode are light, although we know that David Tennant is returning as the Tenth Doctor, along with Billie Piper as Rose, and they'll team up with the Eleventh and Clara to battle the Zygons. John Hurt's mysterious 'other Doctor' character will also play a role. The production team are also gearing up to film the Christmas special, which will introduce the Twelfth Doctor. According to showrunner Steven Moffat, the new Doctor has not yet been chosen, but with filming due soon on the Christmas special a decision will have to be made and announced shortly.
Posted by Adam Whitehead at 16:36