Joe Abercrombie has announced the signing of a new three-book deal with HarperCollins Voyager. The new books will be set in an alternative-history version of Europe (so not the First Law world) and will be loosely connected to one another rather than forming a single story, so not a trilogy in the formal sense of the word. The new books will also be aimed a wider audience than his previous books, with the books being able to be read by both adult and youngsters. 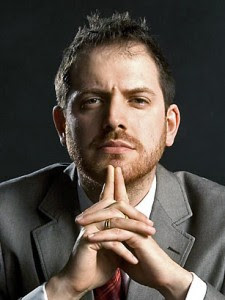 The first book will be called Half a King and will be published in July 2014. The sequels, Half the World and Half a War, will follow in January and July 2015. According to Abercrombie:

"With this trilogy I’ve set out to do something a little different—shorter, tighter, and with a broad, page-turning appeal—while still giving readers the vivid characters, crunching action, twisting plots and black humour that I’m known for."

"I've never experienced such universal enthusiasm for a project in all my years at HarperCollins. We received the submission on a Wednesday and by Thursday afternoon everyone had read and adored it - the whole building was buzzing with the huge potential for this series. Nick Lake (Children's), Emma Coode (Voyager) and I discussed a cross-divisional strategy and on that basis offered immediately. Both Nick and I have been fans of Joe's adult work since The Blade Itself, but I had no idea he had so many other fans in-house."

According to Joe's blog, Joe's next First Law project (probably a new trilogy) will remain at Gollancz, with a publication date to be determined but unlikely to be before 2017. Joe has also confirmed that his worldwide sales have now reached the ballpark of 3 million.
Posted by Adam Whitehead at 12:11

Email ThisBlogThis!Share to TwitterShare to FacebookShare to Pinterest
Labels: half a king, joe abercrombie, news

Well, I'm all for more Abercrombie.

I do wonder what the POD is. I'm hoping for something a little more uncommon than a lot of the alternate Europes we seem to get.

Hope he remembers his true audience after this ill thought out degeneration into the territory of YA fails to bag the author lucrative cash. Whats next "Fifty shades of Crap" romance junk I expect. hmmmph. write proper books or dont write at all. The YA fixation is just an excuse to dumb down and treat the readers as challenged people.

Interesting comments anonymous. Your understanding of YA publishing is simply astounding.

Anonymous!
Hey, I see you all over making great comments and here's another. Thanks so much for being a true audience, your support is overwhelming. Little point of order, though. The advance system prevalent in grown up publishing means ... I ALREADY BAGGED THE CASH! So you needn't worry too much about me.

I'm just wondering how he got hold of the book so early.

Hey Anonymous, define "proper books" and see if you can use punctuation and grammar while doing it.

And I dare you to say something like that to Tamora Pierce and survive with your insides intact.

In fact, do explain why YA automatically dumbs down a reader.

Explain how authors like Neil Gaiman and China Mieville were able to have equal amounts of success in the YA arena.

Or better yet, how do you explain books like Daughter of Smoke & Bone and Divergent, both books from two different genres that don't hold back on having characters killed in brutal ways and are pretty dark in nature.

Or a book like Sherman Alexie's Flight. A YA book with very frank and explicit depictions of language, violence, alcohol and drug abuse, and is loaded with heavy, adult themes.

Come back when you have a credible response.

Oh, and by the way, Fifty Shades Of Gray isn't even considered YA. you were right about the 'crap' part, but that was about it.

I believe Joe Abercrombie will need to change his style if his YA series is to be a success. I can't see it working if he write it in the same way he did "First Law". Frankly, it would be interesting to see if he can pull it off.

Wow,anonymous. Ill thought out sense of overweening and pompous entitlement, much?

Also anon, just because it would be good for a laugh (and I need one) define 'proper books'.

What is a proper writing?

Who can define how a novel should look?

Why should you judge his previous writings in YA as poor?

Good luck to Joe is all I can say

Some one doesnt understamd YA

Hope the new series will be a success.

But this somewhat made me sad, cause it will take longer till we get another book from First Law world :(