A sneak peek at the Dance of Dragons

Thanks to Tor.com, both a sneak peek and a review of the new George R.R. Martin Song of Ice and Fire novella is now available. The Princess and the Queen is a maester's account of the Dance of Dragons, the brutal civil war that took place between differing branches of the Targaryen family approximately 170 years before the events of A Game of Thrones. This civil war almost wiped out the Targaryen family and most of its dragons (the few surviving dragons died a few years after the war). 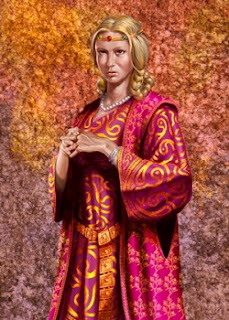 Rhaenyra Targaryen, the titular princess of the story.

The Princess and the Queen will be published in the Dangerous Women anthology, due out in December this year. At 33,000 words it's the longest story in the collection and clocks in at rather more than a tenth of the length of A Game of Thrones itself. It's a condensed version of a much longer story that Martin plans to publish in a collection - working title 'The GRRMarillion' - once A Song of Ice and Fire is fully completed. The World of Ice and Fire (due next year) will draw on both in its own account of the Dance of Dragons.

Martin is currently working on The Winds of Winter, the sixth and (hopefully) penultimate volume of A Song of Ice and Fire itself. In recent interviews he has said he is writing quickly, but not fast enough to give any indication of a release date.
Posted by Adam Whitehead at 17:12

Email ThisBlogThis!Share to TwitterShare to FacebookShare to Pinterest
Labels: a song of ice and fire, dangerous women, gardner dozois, george r.r. martin, news, the world of ice and fire

How many projects does GRRM have to work on now? I know he's gotten several delivered in the past year or so.

t's quite a lovely snippet, and makes me eager to read the rest of the story!

I'm sure he's already said there is going to be a 7th book called "a song of spring" or something with spring in the title.
He isn't writing fast enough to provide an estimate because he isn't writing enough... he is traveling.
Professional convention guest is his main occupation imo.

The seventh (and apparently final) book will be A DREAM OF SPRING. As for writing speed, GRRM has made it clear he got way behind schedule because he unwisely took on too many side-projects in a burst of optimism once ADWD was done. That has left him (again) behind schedule.

I am not expecting to see TWoW until the second half of 2015. Earlier than that seems rather unlikely to me.

"How many projects does GRRM have to work on now?"

Just THE WINDS OF WINTER and any future WILD CARDS books that come up. Everything else is either done (with the delivery of ROGUES, OLD MARS and OLD VENUS), cancelled (the Poul Anderson story) or delayed until after TWoW (the next D&E story).

He's used the "too many sides projects" excuse even before ADWD was finished. It's both his go-to excuse and 100% true. I'm not criticizing him for it. His life and his career and all that. And not getting burned out on one project probably improves the quality of his main project. But if ASOIAF was less good than it is, he'd really have trouble maintaining peoples interest.

"once A Song of Ice and Fire is fully completed"

Good one. I laughed.