Three years have passed since Hari Michaelson - better known to two worlds as Caine - defeated his enemies, left the rancid and overpopulated Earth behind and escaped to Overworld to live in peace. When his adopted ogrillo brother Orbek goes missing in the Boedecken, Caine is reluctantly pulled back to the site of his first and greatest adventure, the one that won him his name, and he finds that he must finally face the ramifications of the huge events that happened twenty-five years earlier. 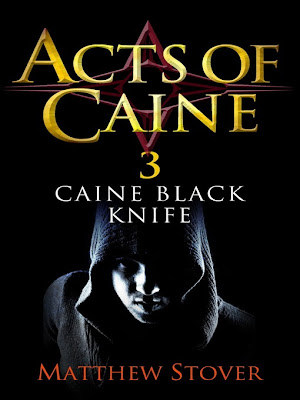 Caine Black Knife is the third novel in the Acts of Caine series. With every book in this series, author Matt Stover seems to enjoy changing gears, shifting genres, mixing up casts and generally wrong-footing the audience. After Blade of Tyshalle, a massive, epic and weighty (in terms of both size and theme) tome, Stover resists the urge to go bigger and more apocalyptic. Instead he strips things down, delivering the shortest and most focused novel in the series.

Caine Black Knife at heart is a detective story. Caine is trying to find out where his friend Orbek has gone and, once that's done, what the hell is going on in the Boedecken Waste. Caine is not happy to be back, as his former visit transformed him into a superstar but at the cost of enormous numbers of lives and only by Caine performing some truly heinous acts. The novel is divided into chapters that alternate between Caine's investigation in the past and flashbacks to his first adventure in the Boedecken. Some familiar faces return (or are discussed at length) from the first two books but for the most part this is a new and stand-alone adventure.

Caine is a complex protagonist at the best of times, and in this novel Stover has to show him twice over at different points in his life. The contrast between the more ruthless and selfish 25-year-old Caine and his 50-year-old, half-crippled, more cynical but also more reflective and (dare we say it) guiltier older self is fascinating. Caine is driven by his demons and ghosts in this novel, but Stover cleverly avoids undercutting the character development from the previous two books: Caine has made his peace with a lot of the problems he had previously and even made something of a new life for himself before he is drawn into Orbek's problems. 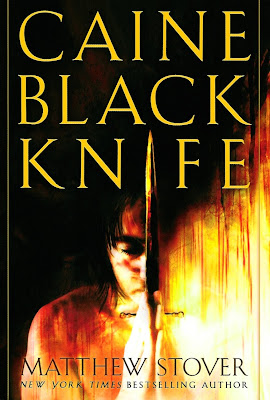 The shorter page count and tighter focus means more action and plot development, but never at the expense of characterisation. The cast is much smaller than Blade of Tyshalle, but we still get to meet several Knights of Khryl (a bunch of fanatical warriors who somehow manage to be unlike any other bunch of fanatical religious warriors you've ever met in a fantasy novel) and a bunch of Caine's past associates. Stover has a gift for fleshing out even briefly-appearing characters, with even the staff and patrons of the inn Caine is staying it getting developed and involved in the storyline. Also, whilst black, cynical humour has always been part of the series, it feels a bit more prominent in this volume which helps alleviate the grimness.

This is a pretty dark book - if not quite as harrowingly bleak as Blade of Tyshalle - but Stover manages to sidestep a lot of the problems associated with modern 'grimdark' fantasy. The violence is prominent but never feels gratuitous. Apart from Caine, most of the major and important characters in the book are female (as in the previous two, for that matter) and whilst sexual assault is implied, it is kept firmly off-page and treated with seriousness. There's a strong undercurrent of tragedy and inevitability running through the book and Stover even subverts his own 'happy ending' for a couple of the characters by pointing out how they died during another adventure years later.

If there is a problem with the book, it's that it feels like a stand-alone but ends abruptly with numerous plot strands left unresolved. Though irritating on release (with a four-year gap for the next volume), this is not a problem now since the fourth book, Caine's Law, is already available.

Caine Black Knife (*****) is Stover once again changing the way he writes and even the genre (to an extent) and still coming up with a gripping, intelligent and original fantasy novel. Outstanding. The book is available now in the USA and as an ebook-only release in the UK.
Posted by Adam Whitehead at 14:31

Oh, I'm really looking forward to your take on Book 4! It's very complex, and the only Caine novel I have mixed feelings about.

So awesome to see these books back on the grid, so to speak. Loved the flashbacks/replays. That first scene with the bladewand was a 2.5 book buildup and totally worth the wait!