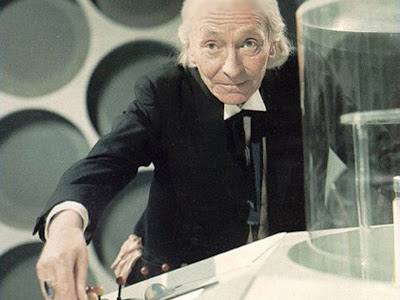 William Hartnell (1908-1975) played the First Doctor in 134 episodes and 29 serials, airing over three seasons and part of the fourth. His era introduced the core concepts of the show and recurring enemies such as the Daleks and Cybermen. He had 10 companions, more than any other Doctor.

The First Doctor: William Hartnell (1963-66)
The original plan for Doctor Who had been that the series would alternate between historical serials set in established times and places (and thus able to use existing costumes and sets from the BBC's considerable stocks) and science fiction stories incorporating space travel, monsters, aliens and futuristic settings. The idea was that kids would tune in for the SF shows and then be educated by the historical dramas. So, following the first episode the next three were set on prehistoric Earth and saw the TARDIS crew inadvertently give the secret of fire to a bunch of cavemen. Its ratings were worryingly low.

For the second serial, Verity Lambert commissioned writer Terry Nation to come up with a science fiction idea. Nation wrote a topical story riffing on both the ongoing Cold War and fear of a nuclear conflict (the Cuban Missile Crisis had taken place just a year earlier) and also on the idea of Nazi racial superiority. Nation's resulting seven-episode script was ambitious, charting the aftermath of a nuclear war on an alien planet that left the survivors divided into an advanced city of mutants forced to travel around in robotic shells, and pacifistic tribesfolk who had vowed never to fight again. Donald Wilson was unimpressed and suggested they ditch the script, but Lambert fought for it on the basis they had nothing ready to replace it with. Designer Ridley Scott (yes, that one) was brought on board to design the robotic shells of the aliens but he had to drop out in favour of Raymond Cusick due to a scheduling clash. Cusick's design for these 'Daleks' proved wildly successful.

The resulting serial was expensive but also hugely popular: audience figures more than doubled from the opening serial's worryingly low (and possibly cancellation-threatening) 4 million to almost 11 million, ensuring the show's future. Lambert realised they would have to bring the Daleks back and began planning a sequel, although there was no room for it in the initial production block.

The rest of the first season saw historical adventures with Marco Polo, the Aztecs and during the French Revolution alternating with stories set on alien planets. This format resumed for the second season, with some experimentation: in the first serial the Doctor is able to return Ian and Barabara to Earth (his attempts to get them home having formed a very rough story arc over the course of the first season) but something goes wrong and they end up miniaturised. 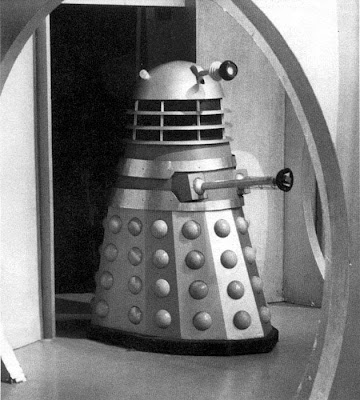 A Dalek from their very first appearance in 1963.

The second serial of the second season was the long-awaited Dalek sequel, The Dalek Invasion of Earth. The BBC stumped up extra money for the serial, hoping to capitalise on the Daleks' popularity, and the production team was able to film location scenes of Daleks on the streets of London. The extensive location shooting was unusual for the series, as the low budgets mostly kept it contained to the studio even for scenes set outdoors. The serial was again hugely popular and kick-started 'Dalekmania', a toy craze lasting until 1966 or thereabouts. During this time Dalek merchandise sold by the bucketload and two Dalek movies were produced. These two colour films adapted the first two Dalek stories and starred Peter Cushing as the human 'Dr. Who'. Despite their popularity, these films were considered non-canon to the TV series.

The Dalek Invasion of Earth also marked the first major cast change in the show's history. Unhappy with her limited character development, Carole Ann Ford chose to leave the show at the end of the serial. She was replaced by Maureen O'Brien, playing the similar role (though this time a young human woman from the future) of Vicki in the subsequent two-parter, The Rescue. A third Dalek story, The Chase, aired towards the end of the season and saw the departure of Ian and Barbara from the TARDIS as well and their replacement with space pilot Steven Taylor (played by future Blue Peter host Peter Purves). William Hartnell was apparently upset by the departure of the rest of the original cast and likely began considering his own future on the show around this time.

The second season would go on to feature more historical dramas - one set during the Great Fire of Rome in 64 AD and another during the Crusades (starring future Game of Thrones regular Julian Glover as Richard the Lionheart) - but it was becoming clear that the audience loved the SF stories more. An experiment was undertaken with the season's final story, The Time Meddler, which opened as a standard historical drama but then skewed into SF when the Doctor was confronted by the Meddling Monk, another time-traveller from the same race with his own TARDIS. This mashing-up of the historical with SF elements was successful, and would become the norm for stories set in the past after a few more years.

The third season was a time of even greater change. Terry Nation was keen to launch the Daleks as their own spin-off show (and under the licensing terms of the show, Nation retained a separate copyright on his creations and could use them in other projects) and the BBC decided to appease him by dedicated a massive twelve weeks (plus another one-off prologue episode) to a single storyline, The Daleks' Master Plan. This story was hugely important, establishing the Daleks as a major time-travelling threat and also featuring the deaths of two companions (albeit relatively short-lived ones), Katarina and Sara Kingdom. Nicholas Courtney also made his first appearance on the show, this time as Brett Vyon. A few years later he would return in the more famous role of Colonel (and later Brigadier) Alastair Lethbridge-Stewart. Verity Lambert also departed just before The Daleks' Master Plan and William Hartnell did not find the new incoming production team to be as personable. 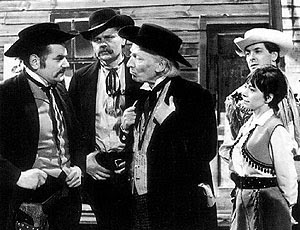 The Gunfighters is widely-derided in Doctor Who fandom, though it has its fans.

More historical shows followed, including what is widely believed to be one of the show's absolute nadirs, The Gunfighters. An SF serial, The Ark, made the first, more original use of the TARDIS as a time machine (the Doctor's inability to pilot the TARDIS at this point, due to malfunctions, meant that it generally only showed up at the start and end of adventures and rarely inbetween). The Doctor and his companions arrive on a huge spacecraft and solve the crisis there in two episodes. They leave, but the TARDIS mysteriously seems to stay still. Emerging again, they find that centuries have passed and their actions have now passed into legend. Simple enough stuff, but at the time an interesting deviation from the standard format.

By the end of the third season, William Hartnell was clearly ailing in terms of health and was no longer happy working on the show, with almost everyone who had started the show off with him having departed. Producer Innes Lloyd and script editor Gerry Davis developed an intriguing idea: as an alien, the Doctor was not bound by the same rules of mortality as a human, and it might be the case that instead of dying the Doctor would rejuvenate himself into a new form and appearance. The producers consulted Hartnell as a courtesy, and he agreed that that show should continue without him and even suggested his own replacement: Patrick Troughton. In event several actors were considered, but the producers went with Hartnell's choice and cast Troughton in the role. The decision was made that Hartnell would depart at the end of the second serial of the fourth season, handing over to Troughton. This serial would also be important for introducing the Cybermen, an enemy species that would go on to rival the Daleks in popularity.

Review ratings are only given for complete serials I have seen, which isn't very many. Those looking for an in-depth and unusual review of the entire series are directed to Adventures with the Wife in Space, in which a committed Doctor Who fan exposes his wife to the series and records her reactions. Serials marked ~ are incomplete, with one or more episodes missing from the BBC archives (a future article will expand on why). Serials marked ~~ are completely missing, with no surviving episodes remaining.

The First Doctor regenerates at the end of the fourth episode of The Tenth Planet, a result of extreme old age. This is the only 'natural' regeneration that the Doctor has undergone to date.