Tobias Menzies, who plays Edmure Tully on Game of Thrones, has been cast in two major roles on Ron Moore's TV adaptation of the Outlander books. 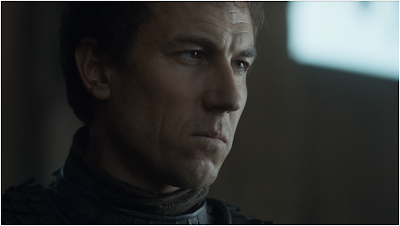 Menzies, who first rose to attention playing Brutus on HBO's Rome, will be playing both Frank Randall, the 20th Century husband of lead character Claire Randall, and 'Black' Jack Randall, his 18th Century ancestor. In the books and TV series, Claire is a WWII nurse who develops the ability to move between 18th Century Scotland and mid-20th Century Britain, and becomes embroiled in a romance with a Scottish rebel in the past.

Sam Heughan was recently cast in the co-lead role of Jamie Fraser.

Outlander will start filming in the autumn for transmission on Starz in 2014. Menzies' casting will presumably limit Edmure's future appearances on Thrones to when filming does not overlap.
Posted by Adam Whitehead at 13:22

Well it's not like Edmure has a significant role in the books after the RW. I can only think of one scene in AFFC. Of course the TV writers can do things differently and show more, but I doubt there's a reason to do so. Actually I don't expect to see him at all in S4.