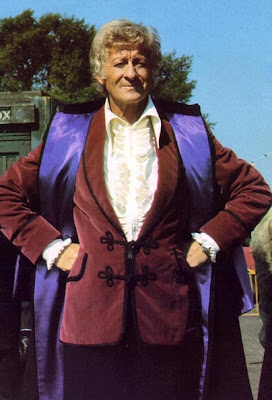 Jon Pertwee (1919-96) played the Third Doctor in 128 episodes and 24 serials, airing over five seasons. He had three companions but a large number of other recurring characters. His era introduced recurring elements such as multi-Doctor stories, parallel universes and time paradoxes, and enemies including the Master, Autons, Silurians/Sea Devils and Sontarans. He returned to the role once more after he left and also reprised the role on stage and in charity sketches.

The Third Doctor's tenure began with a bang. The show was now in full colour and had gained a major star in the form of Jon Pertwee. Whilst Hartnell and Troughton had been recognisable figures from stage and screen, Jon Pertwee was much better-known for his long stint on radio sitcom The Navy Lark. He was cast because the production team wanted his comic timing and sense on the show, but Pertwee instead saw the series as a vehicle to more serious dramatic roles. Pertwee played the Doctor fairly straight (though with a certain dry wit) with a strong dose of morality and a dramatic streak. He was also much more a man of action than his forebears, not above getting into hand-to-hand combat with his enemies, and also had a fascination with gadgets and vehicles. The sonic screwdriver - a minor tool developed during Troughton's final two seasons - became a regular stand-by to get the Doctor out of difficulties. Amusingly - and long before Star Trek made it an issue - the writers decided they couldn't be bothered to come up with technobabble on a weekly basis and simply had the Doctor 'reversing the polarity of the neutron flow' whenever a tech-problem emerged.

The Doctor still had an assistant - initally Caroline John playing scientist Liz Shaw, then Katy Manning as the ditzy Jo Grant and, most iconically, Elisabeth Sladen playing reporter Sarah-Jane Smith - but a lot of action revolved around UNIT and its officers. Brigadier Lethbridge-Stewart (Nicholas Courtney) and Sergeant Benton (John Levene) had been inherited from the Troughton era (both appeared in The Web of Fear and The Invasion) but were soon joined by Captain Yates (Richard Franklin) and a large number of disposable soldiers (UNIT's staff turn-over was higher than in the Enterprise's security division). This gave the writers a larger number of characters to work with and saved the production team money by allowing them to re-use sets and regular characters rather than having a large guest cast for each serial.

The Third Doctor's tenure is also notable for introducing the idea of long-form story arcs. Recurring enemies and very loose story arcs had featured before (such as the First Doctor's attempts to get Ian and Barbara home), but this was the first time that continuity was observed more closely. These elements included Jo and Captain Yates's on-off relationship, the Doctor's attempts to repair the TARDIS and, most notably, the introduction of a new, more personal enemy. 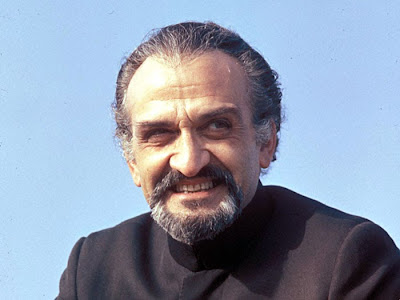 The first on-screen incarnation of the Master (although, as later revealed, this was his thirteenth incarnation), played by Roger Delgado between 1971 and 1973.

The production team conceived the idea that the Doctor should have a nemesis, a Moriarty to his Holmes. A previous recurring villain from the Doctor's own race (the Meddling Monk, from The Time Meddler and The Daleks' Master Plan) was considered too bumbling and ineffectual to be a real threat, so a new character was created. The Master, played with villainous relish by the excellent Roger Delgado, was an instant hit and his repeated machinations in the eighth season, culminating in his eventual capture and imprisonment by UNIT, provided the series with a new ongoing storyline. Pertwee and Delgado got on famously, their chemistry inspiring the writers to take their relationship in interesting directions such as having them work together against common enemies and engage in swordfights whilst exchanging jibes.

After several seasons spent creating new threats, the ninth season saw the return of established foes: the Daleks in Day of the Daleks (Nation's attempts to get a spin-off show failing and him agreeing to let the BBC use them again) and the Ice Warriors in The Curse of Peladon. This serial wrong-footed audiences by having the Ice Warriors turn up as allies of the Doctor (to his distrust), the first time the show took a previous hostile alien race and gave them more nuance.

For the tenth anniversary of the series, the producers decided to unite all three incarnations of the Doctor in one story. Hartnell's ill health reduced his appearance to a brief cameo on a video screen, but Troughton and Pertwee squabbled magnificently through a fairly pedestrian story. This story, The Three Doctors, was important in that it established some of the cornerstones of Time Lord mythology (such as the - here unnamed - Eye of Harmony and the role of Omega in creating time travel technology). It also ended the Doctor's exile on Earth and allowed him to travel in the TARDIS once again. Rather than abandon the extremely popular UNIT format altogether, it was decided to mix UNIT-focused storylines with stories on other planets and this became the norm in Pertwee's final two seasons.

Tragedy struck the production when Roger Delgado was killed in a car crash after completing work on his tenth season story Frontier in Space. The news hit the production team hard, but none harder than Pertwee who decided to leave the show at the end of the eleventh season after five years in the role. This final season introduced another set of iconic enemies - the potato-headed Sontarans - and finally named the Doctor's homeworld as Gallifrey. In the final episode of the series Pertwee bowed out, regenerating into the curly-haired form of Tom Baker, who would go on to become the longest-running actor in the role.

Review ratings are only given for complete serials I have seen, which isn't very many. Those looking for an in-depth and unusual review of the entire series are directed to Adventures with the Wife in Space, in which a committed Doctor Who fan exposes his wife to the series and records her reactions. From the start of the Third Doctor's tenure onwards, all Doctor Who serials fully exist in the BBC archives with no further missing episodes.

The Third Doctor regenerates at the end of the final episode of Planet of the Spiders, having been poisoned by radiation on the planet Metebelis III.