HBO has updated it's information on the third season of Game of Thrones. More detailed figures reveal that the show averaged 14.2 million American viewers over the course of Season 3 over all platforms, up from the previous rough estimate of 13.6 million. This means that Game of Thrones is a stone's throw away from eclipsing the 14.4 million average that The Sopranos enjoyed over its run. This would make Game of Thrones the biggest-ever show on the network, and there is also some speculation that, combined with international viewership (Game of Thrones is already the most-sold show in HBO's history) and DVD and Blu-Ray sales, the show might already hold that title. 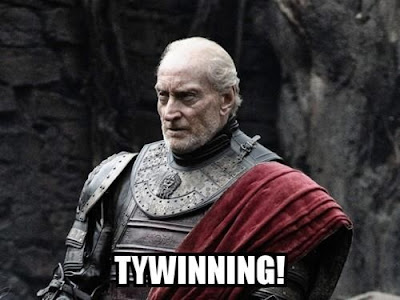 Combined with the recent renewing of True Blood for a seventh season (the record for a dramatic show on the network; Oz and The Sopranos both only managed six seasons, but split one apiece into two seasons for effectively seven), this raises hopes that Game of Thrones will be able to complete it's planned eight-season run on the channel.

Season 4 of Game of Thrones is currently filming, with shooting expected to move from Iceland to Croatia shortly. Season 4 will begin airing in March or April 2014. Season 3 will be released on home media on 18 February 2014.
Posted by Adam Whitehead at 16:18

I think the biggest indicator is how swiftly it entered the pop culture.

"this raises hopes that Game of Thrones will be able to complete it's planned eight-season run on the channel"
Only if Martin manages to finish the series on time. I won't hold my breath.

"Only if Martin manages to finish the series on time. I won't hold my breath."

That has nothing to do with it. If HBO overtake GRRM and finish before him, they will do that. They've made that crystal clear.

Ghost, rumor has it Martin has already informed the HBO writers of the complete story arc. So if he drops dead or doesn't manage to complete the series they can still complete the HBO series. And frankly given how the HBO series is better than the book that would be ok (not wanting Martin to die I mean but if he doesn't get the books out in time).

I'd prefer to read the books first. I'd hate for the TV series to overtake the books. It would be hard to hold out and resist not watching though.

Game of Thrones is planning for a total of seven seasons: http://www.tvguide.com/news/game-thrones-end-seven-seasons-1065889.aspx.

Unknown: The show is great for TV, but it rarely touches the quality of the books. What changes have they made that improve upon the source material?

Frank Doelger has said that he thinks they can 'get to' seven seasons. However, Benioff and Weiss (who are the showrunners and thus senior to Doelger) have said consistently since the first season that they are expecting eight seasons or 80 episodes.