Wertzone Classics: The Lord of the Rings - The Fellowship of the Ring

Sixty years ago, the Hobbit Bilbo Baggins came into possession of a magic ring. When he decides to leave his home in the Shire and retire, he finds it curiously difficult to leave the ring behind. Disturbed, the wizard Gandalf investigates and discovers that Bilbo's trinket is actually the One Ring of legend, which the Dark Lord Sauron needs to complete his return to power. Bilbo's cousin Frodo has to take the Ring on a long and arduous journey across Middle-earth to the volcano known as Mount Doom, deep within Sauron's land of Mordor, the only place where it can be destroyed. 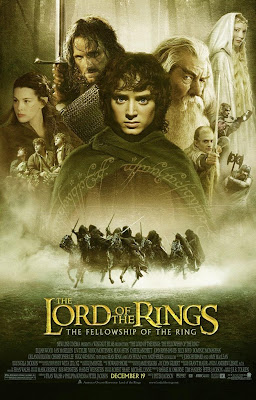 Back in 1999, when Peter Jackson began filming The Lord of the Rings, there was an expectation of failure. A thousand-page-long book adapted into three three-hour movies by a director whose biggest previous movie had been a minor ghost comedy starring Michael J. Fox? And on a budget of only $90 million apiece at a time when $200 million+ budgets for such epic films were becoming more commonplace? It seemed like a recipe for disaster.

Against the odds, Jackson pulled it off. The trilogy as a whole is a remarkable work, translating Tolkien's vision onto the screen with - for the most part - respect and integrity. There are missteps, mistakes and some ill-conceived changes, but these are mostly restricted to the second and third films in the sequence. The Fellowship of the Ring, on the other hand, is moved from page to screen with enviable skill.

The main key to the film's success is the casting. Elijah Wood may be a lot younger than Frodo in the novel, but he sells Frodo's mix of book-learned wisdom with a lack of practical experience with wide-eyed enthusiasm. Representing the old guard, veteran actors Ian McKellen, Ian Holm and Christopher Lee bring their roles of Gandalf, Bilbo and Saruman to life with presence and gravitas. The actors are pretty much all excellent, even Cate Blanchett as she struggles with a curiously-written interpretation of Galadriel. Marton Csokas is probably the film's weakest acting link as Celeborn, but given he has about twenty seconds of screentime, this is not a major issue. I must also admit to not being altogether convinced by Viggo Mortensen as Aragorn the King, but as Strider the Ranger in this first film he is superb.


In terms of scripting and changes from the books, some key sequences are missing. Tom Bombadil is gone (which is a wise move), as are the barrow-wights (which is more regrettable) and other elements are compressed (the journey from the Shire to Bree, which covers dozens of pages in the book, happens instantly on-screen) or eliminated altogether (Fatty Bolger, the 'Fifth Hobbit', is exorcised from events). Other events that happened in the book off-page or only in flashback occur here in their correct chronological order, such as Saruman's confrontation with Gandalf at Isengard.

For the most past these changes are well-judged, even if some fan-favourite moments are left out. For a three-hour movie the pacing is generally excellent, with a good mix of exposition, character-building moments and action setpieces. The movie's effects are impressive, with CGI being held back and used only when absolutely necessary, with miniatures often employed to give physical locations a sense of presence and weight. Whilst clearly resulting from budgetary restrictions, this prevents the film getting buried under fake-looking CGI and means it still has more convincing effects than the recent first Hobbit movie, which feels a little silly.

It's difficult to pick a stand-out moment from the film. The Black Riders pursuing the Hobbits is an evocative moment, as is the confrontation on Weathertop and the flooding at the Fords of Bruinen. The outstanding sequence is probably the descent through Moria, which features both excellent character moments (such as Gandalf's conversation with Frodo when they discover that Gollum is pursuing them), humour (Pippin's encounter with a skeleton on a well), action (the battle with the cave troll in the chamber of Mazarbul) and tragic horror (Gandalf's last stand on the bridge of Khazad-dum). The whole sequence is a joy to watch.

The film missteps a little near the end: the trip to Lorien, where the Fellowship regroups after Moria, made sense in the book but in the film it dangerously comes close to killing the pace of the movie altogether. This is not helped by the somewhat bizarre characterisation of Galadriel. Jackson is to be commended for trying to make the longueur work, but ultimately it feels like it's delaying the film's climax too much at the moment it should be ramping up towards it. Fortunately, in the cinematic edition it's a fairly brief sequence. Events culminate in the epic battle on Amon Hen, with Sean Bean delivering a stand-out performance during Boromir's last stand and Sean Astin's Sam getting his first notable moments in the film's cliffhanger ending.

The movie's success is furthered by some truly remarkable production design and the quite astonishing soundtrack by Howard Shore, which must rank as one of the finest movie soundtracks of all time.

The Lord of the Rings: The Fellowship of the Ring (*****) remains, twelve years on, the finest fantasy movie ever made. The writing, acting and effects work all combine and work in tandem with one another to produce something very special, something that Peter Jackson has struggled to replicate ever since. The film is available now in the UK (DVD, Blu-Ray) and USA (DVD, Blu-Ray).

Note on the Extended Edition: In 2002, the film was reissued as an Extended Edition with approximately 30 minutes of additional footage integrated into the movie. These extra sequences include (amongst many others) an expanded opening sequence about Hobbits, additional scenes at Bilbo's party (reintroducing the Sackville-Bagginses from the book), additional combat scenes on Amon Hen and a major extension of the Lorien sequence. The Extended Edition is remarkably well-integrated with the structure of the existing film and gives new information that is useful for the sequels (such as the gift-giving sequence at Lorien). However, it does also expand on the film's weakest elements, with more screentime for Celeborn and Lorien overall. Whilst this does adversely affect pacing, it is more than made up for by the strength of new scenes earlier on. As a result, the Extended Edition (*****) retains the score of the cinematic cut. It is also available now in the UK (DVD, Blu-Ray) and USA (DVD, Blu-Ray).
Posted by Adam Whitehead at 13:38

Email ThisBlogThis!Share to TwitterShare to FacebookShare to Pinterest
Labels: j.r.r. tolkien, lord of the rings, middle-earth, peter jackson, the fellowship of the ring, wertzone classics

I didn't find that the Lorien scenes through off the movie's pacing any. It felt to me, much as it would have felt to the characters, like a respite, a bit of a break from the action-heavy scenes they'd just come from and would soon be in the middle of again.

I very much agree with your commentary on the CGI when compared to "The Hobbit," though. The CGI in "The Hobbit" came across very much as though they were trying too hard, making everything too obviously CGI in an attempt to show off what they could do. And it fell flat with me. If it takes a lower budget to achieve the awesome effects of the Lord of the Rings movies, then I'm all for a lower budget!

For me the theatrical versions didn't work well, because they cut out too much of the character development. I loved the extended versions, though, so those are the only ones I watch.

Mmmm. I saw -Fellowship- in the theater six times, -Two Towers- five times, and -Return of the King- once, which about sums up my feelings on them.

I'm in absolute agreement with you on the judicious rather than profligate use of CGI... the LOTR films have a sense of tactile grounding because nearly all their combat scenes are based around actual actors swinging at other actual actors, and the obvious flights of total desktop computer fantasy (like Legolas swarming up the oliphaunt) are relatively few, at least until the last film. A troop of eighty guys in Uruk-Hai costume actually stomping about on rocks and grass is just going to look better in most respects than eighty CGI models bouncing around a facsimile of the same scenery.