The Shining Girls by Lauren Beukes

A young woman is brutally attacked and left for dead. Against the odds, she survives and vows to find her would-be killer. Joining the Chicago Sun-Times as an intern, she uses the resources of the newspaper to begin piecing together the signature of a serial killer...a serial killer who has somehow been active for sixty years. 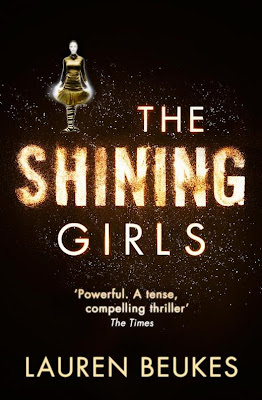 The Shining Girls is the third novel by South African author Lauren Beukes, whose previous novel Zoo City won the Arthur C. Clarke Award. The Shining Girls is a novel told primarily from two perspectives, one from the time-hopping serial killer himself and the other from his would-by victim who escaped and is now trying to track him down, Kirby. Other POVs (such as the killer's other victims and Kirby's reluctant journalistic partner, Dan) occasionally intrude but the novel benefits from this compare-and-contrast approach between the unhinged murderer criminal and the person trying to track him down.

Whilst Zoo City was applauded for its SF credentials, the primary SF element of The Shining Girls - that the serial killer can travel through time - is curiously incidental. It's more of a mechanism to deliver the serial killer to his targets and the introduction of the occasional (and quickly resolved) closed time loop is about as speculative as things get. This isn't a big problem because the core themes of the book lie elsewhere.

Spanning the period 1931-1993, the novel takes a look at the evolution of women's rights and attitudes towards them in the 20th Century. Possibly aware that this might sound preachy, Beukes has cleverly hidden this beneath both thriller and SF elements and does a good job of integrating these different ingredients together into a cohesive narrative. Each of the 'shining girls' would seem to be, to some extent, a trailblazer or a harbinger of the changing role of women in the time period. One victim in the 1940s is a black single mother supporting her family by working as a welder at a military dockyard; another in the 1950s is a man who wants to become a woman, and succeeds in fooling everyone (even the murderous 'rules' governing the serial killer's activities, apparently). Another victim loses her 'shininess' when her early promise is ruined by a descent into drug-induced insanity. The rules governing the serial killer's activities are never spelt out, but left open to interpretation, especially with regards to Kirby herself.

The book's sense of time and place is impressive, with Beukes charting the changing landscape of Chicago back and forth over the years. The atmosphere of the book changes from the Depression and prohibition-wracked 1930s to the more modern and relaxed 1990s and back again with deceptive ease. In terms of character, the writing is accomplished with Beukes often having to use single chapters to establish a character in depth and then brutally kill them off. Beukes does well in portraying the serial killer, Harper, as a man with no redeeming qualities at all. We don't feel sympathy for him, but he remains interesting despite his repellent acts. Kirby is also a well-developed character dealing with severe post-traumatic stress but overcoming it to focus on her goal. In a brave move, Kirby is also not presented as a sympathetic character: she keeps other people at bay, she uses them and their contacts to get what she wants and she rides roughshod over the feelings of the family members of other murder victims in her haste to find more leads. She isn't a typical heroine, but she is an all-too-human character and that makes her more realistic.

The book does feature some weaknesses. The ending, which apparently dumps any kind of SF explanation for what's happening for a supernatural one, feels a bit disappointing. Beukes does such a great job of destroying or obscuring evidence that would lead Kirby to the killer (a rejection of the amazing coincidences or deus ex machina that lesser thrillers rely on) that when she does catch a lead it feels a bit contrived. A bigger problem is that the pacing is uneven, with nail-biting and tense chapters alternating with lengthy, dull ones where characters muse on their mundane life-problems with their ex-partners or parents.

Still, The Shining Girls (***½) is a fascinating read, if at times a difficult, flawed, uneven and stomach-churning one. It is available now in the UK and USA.
Posted by Adam Whitehead at 13:31

This sounds quite intriguing! I might pick it up!

I've been lusting after this book for a while, and I'm glad to say that I finally got the chance to buy a copy earlier this week. It's pretty high on my TBR list, so I'll likely end up reading it in the next month or so. It'll be my first intro to Beukes's work, and I've got some high hopes, from all the reviews I've seen!

I didn't really take the ending to be supernatural. More of a time loop thing, self-generating and self-sustaining.