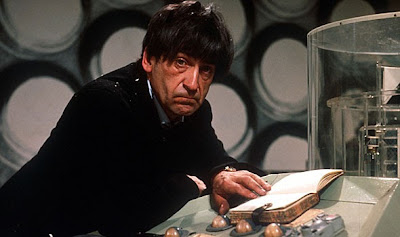 Patrick Troughton (1920-87) played the Second Doctor in 119 episodes and 21 serials, airing over three seasons. He had five companions. His era introduced recurring elements such as UNIT, the Brigadier and the Time Lords, and enemies including the Macra, Ice Warriors and Great Intelligence. He returned to the series three times after his departure, more than any other Doctor.

Patrick Troughton joining the cast resulted in a significant change to the dynamics of the show. Previously the Doctor had taken a mentor/advising role with the action and running around left to his younger companions. Indeed, the show had developed the conceit of giving the Doctor a younger male companion (Ian, Steven and, in his last story, Ben) who could run around and get into fist-fights. Troughton, more than a decade younger than Hartnell, was considerably more mobile and played a more active role in his storylines. After a revolving door of companions who usually lasted at best a season, the show also found in Frazer Hines a committed actor willing to stay for the long term. Playing Highlander Jamie McCrimmon, Hines remained for the entire tenure of Troughton (appearing in only six less episodes than Troughton himself) and would later return with Troughton in two later serials. The Doctor-Jamie pairing was highly popular and successful, as was their pairing with initially Deborah Watling as Victoria and then Wendy Padbury as Zoe.

As well as introducing Jamie,  The Highlanders was important as it was the last 'pure' historical story for fifteen years. All subsequent historical stories would actually have a strong SF component to them, following the model successfully laid down by The Time Meddler. The Cybermen would return in The Moonbase and their popularity would grow, which was useful due to Terry Nation withdrawing permission to use the Daleks after Evil of the Daleks. Nation planned to pursue a dedicated spin-off TV show in the United States which never came to fruition. The BBC killed off the Daleks - apparently for good - at the end of Evil of the Daleks.

Troughton's second season gave his era its most defining feature: monsters. The production team took a great delight in creating various creatures for the Doctor to face and they achieved a surprisingly good hit rate. Of the adversaries created in Troughton's tenure, four would go on to return in later years (the Macra, Cybermats, Great Intelligence and Ice Warriors), making return appearances right up to the modern day. Troughton's era also saw the introduction (in Fury from the Deep, the final episode of the fifth season) of the sonic screwdriver, the Doctor's catch-all device which could be used to get him out of all manner of scrapes. 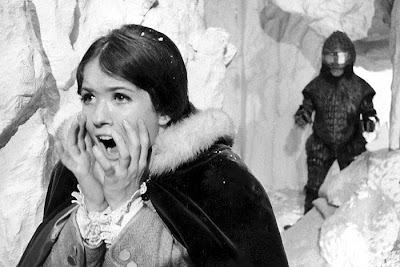 The Doctor's companion Victoria is menaced by an Ice Warrior in the serial of the same name.

During his third season Troughton decided to move on. Three years, he decided, was the optimum amount of time to spend on the show, long enough to bolster his profile but not too long to risk typecasting. This was the so-called 'Troughton Rule' which several later actors in the role (most notably Peter Davison and Matt Smith) took to heart. It is notable that the one who most blatantly did not - Tom Baker, who spent seven years in the role - had the greatest difficulties with typecasting after leaving the show.

Frazer Hines and Wendy Padbury likewise chose to move on along with Troughton, and this gave the BBC an unparalleled opportunity to perform a 'soft reboot' of the series. The BBC had decreed that all shows made from 1970 onwards would be made in full colour, with a corresponding loss of budget and episodes. Doctor Who's production team came up with a creative way around this and decided that the Doctor would be captured and punished by his own race (now named, for the first time, as the Time Lords) for meddling in the affairs of other worlds. He would be exiled to Earth with a recurring cast of characters who would help him defeat alien threats to the planet. This shift in format - inspired by the success of The Web of Fear in the fifth season (in which a British military unit and the Doctor defeated an invasion of robot yetis in the London Underground, controlled by the Great Intelligence) -  was given a trial run in the sixth season with The Invasion, which introduced the United Nations Intelligence Taskforce (UNIT) under the command of Brigadier Alastair Lethbridge-Stewart (Nicholas Courtney). With The Invasion proving enormously popular, the decision was made to proceed with the format change.

The Second Doctor bowed out at the end of the 10-part The War Games, the show's second-longest serial (third if you count Season 23 as one big story). This story introduced the Time Lords and the final episode was partially set on their homeworld (unnamed at this stage). The story marked the end of the first distinct 'era' of the show's history. The more colourful and action-packed 1970s were just around the corner.

Review ratings are only given for complete serials I have seen, which isn't very many. Those looking for an in-depth and unusual review of the entire series are directed to Adventures with the Wife in Space, in which a committed Doctor Who fan exposes his wife to the series and records her reactions. Serials marked ~ are incomplete, with one or more episodes missing from the BBC archives (a future article will expand on why). Serials marked ~~ are completely missing, with no surviving episodes remaining.

The Second Doctor regenerates at the end of The War Games. He is forced to regenerat at the order of the Time Lords as part of his punishment prior to his exile to Earth.

Most people, me included, Adam, would reverse the ratings on The Dominators and The Mind Robber. :)

Also, thanks for continuing this series.

I found the THE MIND ROBBER to be just self-consciously weird and tiresome.