Genre actor and legend Michael Ansara sadly passed away on Wednesday 31 July at the age of 91. 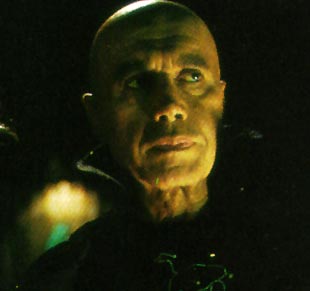 As Elric in Babylon 5.

Ansara will be best-known to SFF fans for his role as Commander Kang in Star Trek. One of the original Klingons, he played the role in the original series episode Day of the Dove. Thirty years later he reprised the same character for the excellent Deep Space Nine episode Blood Oath, and then again in the Voyager episode Flashback, when Kang faced off against Captain Sulu of the USS Excelsior in a special episode made to commemorate the 30th anniversary of the franchise. He also played an unrelated character, Jeyal (husband of Lwaxana Troi!) in another episode of DS9. Towards the end of his career, he voiced the character of Mr. Freeze in Batman: The Animated Series and several of its spin-offs.

Born in Syria, Ansara's family moved to the USA when he was two years old. As a child he was chronically shy and took acting lessons to overcome the problem. He began appearing in minor roles in American film in the late 1940s but achieved a breakthrough when he was cast in the role of Native American chief Cochise in Broken Arrow (1956-58). He went on to play the role of Native American US Marshal Sam Buckhart in two episodes of The Rifleman (ironically, one of the main inspirations for Star Trek: Deep Space Nine) and then spun off in his own series, Law of the Plainsman. Later, he played a recurring role on I Dream of Jeannie (he was married to the star of the show, Barbara Eden, for a time). 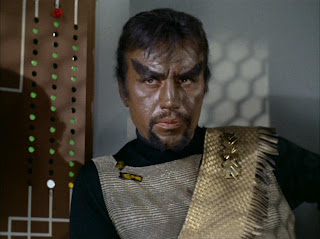 As Commander Kang in the original Star Trek.

Ansara's height, presence, looks and commanding voice won him numerous roles in film and television from the 1950s right through the 1990s. He played three different roles on Irwin Allen's series Voyage to the Bottom of the Sea, another on The Fugitive and two on The Time Tunnel. He played the title character in Soldier, an acclaimed episode of The Outer Limits written by Harlan Ellison. In 1979 he had a recurring role as Killer Kane during the first season of Buck Rogers in the 25th Century.

Ansara also had a memorable appearance on Babylon 5, playing Elric, the leader of the techno-mages in the third episode of the second season, The Geometry of Shadows. The character was a simultaneous homage by writer J. Michael Straczynski to Michael Moorcock's albino hero and also J.R.R. Tolkien (Elric quotes Gandalf at one memorable moment). The character was popular but did not make a return appearance on-screen, instead playing a major role in the spin-off Passing of the Techno-Mages Trilogy of novels.

A great actor who lived a full life and brought to life many memorable roles, both in SFF and outside of it. He will be missed.
Posted by Adam Whitehead at 16:08

I'm saddened by his passing, but his life was, indeed, extraordinary. May he rest in peace!

He had a number of memorable roles in our genre, absolutely. He will be missed.