James Cameron has confirmed that there will now be three sequels to his 2009 movie Avatar, to form a four-film storyline. These films will be shot back-to-back and released in December 2016, 2017 and 2018 respectively. Cameron has hired new writers to help him get the three scripts ready in time. 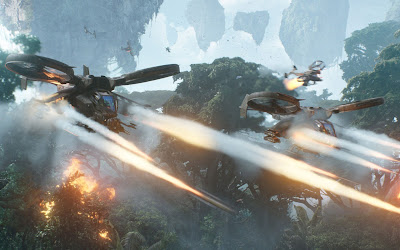 Previously, Cameron had suggested there would be two sequels and locations visited would include Pandora's oceans and other moons in the same system. However, his ambitions for the sequels have grown larger, requiring three full movies to explore.

Avatar was released in December 2009 and is the highest-grossing movie of all time, making just under $2.8 billion worldwide. A limited run for the extended edition of the film plus DVD and Blu-Ray sales have extended that to well over $3 billion worldwide.
Posted by Adam Whitehead at 15:28

This annoys me. James Cameron is a great sci if director. I liked Avatar but why three sequels?! Sam Raimi waged years making three Spider-Man films when his most enjoyable film of the last ten years was Drag Me to Hell. Cameron has too much talent to waste on another three of these films.

This might not be a good thing...but we'll see.

Wouldn't it be nice if one of them is just a fake nature documentary (possibly narrated by David Attenborough)?