The assassin Daud has discovered a threat to the city of Dunwall. The enigmatic Brigmore Witches are working alongside a powerful woman named Delilah on a project with profound consequences for the Empire. Daud, wracked with guilt over his assassination of the Empress, decides to try to atone for his crime by getting to Brigmore Manor (a tricky task in itself) and defeating Delilah. 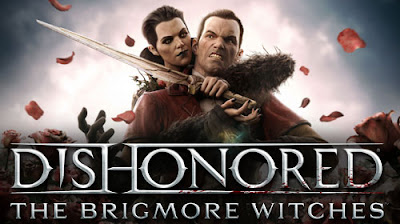 The Brigmore Witches is the second and final story-based expansion (following on from The Knife of Dunwall) for last year's excellent stealth game, Dishonored. Once again you take control of the assassin Daud - one of the first game's antagonists - and discover what Daud was up to during the events of the original game (in which you played Corvo, the Empress's bodyguard framed for the crime Daud committed).

The Knife of Dunwall established a new threat to the city in the shape of the Brigmore Witches, led by the mysterious artist Delilah, who is taking advantage of the chaos caused by Corvo's campaign against the Regent to further her own agenda. The Brigmore Witches opens with Daud headed to Brigmore Manor to confront Delilah, but first he needs passage upriver. The only person he knows with a ship is currently locked up in Coldridge Prison, so he must break in to rescue her and then help her repair her boat before they can depart.

Like The Knife of Dunwall, the Brigmore Witches consists of three new areas to explore. Coldridge Prison is partially recycled from the start of the original game (when, as Corvo, you had to break out of the prison). Following that you have to visit Drapers Ward, a district terrorised by two feuding street gangs, and win over both gang leaders to support your mission. The game ends with you assaulting (or infiltrating) Brigmore Manor itself and confronting Delilah. As is traditional in this series, you can accomplish your objectives through full-scale attacks, stealthy infiltrations and striking from the shadows, or 'ghosting', going through locations without people ever being aware you are there. The choice is up to you. The more violent and blatant your activities the more 'chaos' you generate in the city, which results in heavier security being deployed in later missions and also affects which ending you get (which in the case of this expansion has quite a major impact).

Unlike The Knife of Dunwall, where the final area was rather small and limited, all three of the new areas are extensive in size and consist of sub-areas. Drapers Ward has both a large riverfront area and a large textile mill to explore, whilst Brigmore Manor consists of both extensive grounds and the large, rambling manor itself with its confusing array of levels, sub-levels, attics, traps and hidden rooms. This expansion is both larger and features more content, more choices and more satisfying challenges. However, it's still fairly brief at about five hours in length and players who haven't experienced the franchise at all are advised to wait for the Dishonored: Game of the Year Edition in a couple of months which will include the original game and both expansions for a reasonable price.

The Brigmore Witches (****) sees the original Dishonored bowing out with style, with a satisfying narrative, some great gameplay and some good development of the character of Daud. The game has a tragic, maudlin atmosphere which pays off nicely in the ending (even the 'good' ending has a bittersweet quality to it). It's still relatively short, but packed with replayability.
Posted by Adam Whitehead at 14:20

Nice review. I always get a sense of Lies of Lock Lamora and Perdido Street Station when I play that game. :)