The Lord of the Rings - The Two Towers

The Fellowship of the Ring has been broken. Frodo and Sam are heading east to Mordor, hoping to slip quietly past Sauron's forces. But they are being followed by the creature Gollum, who wants the Ring back for himself. Meanwhile, Merry and Pippin have been captured by uruk-hai loyal to the rogue wizard Saruman and are being taken westwards towards his stronghold. Aragorn, Gimli and Legolas are in hot pursuit, but their path is diverted south to the Kingdom of Rohan, where Saruman's armies now make war upon the beleaguered forces of the bewitched King Theoden. To gain victory and allow Rohan to join Gondor in resisting Sauron, the companions must free Theoden and win a victory over a vastly superior enemy. 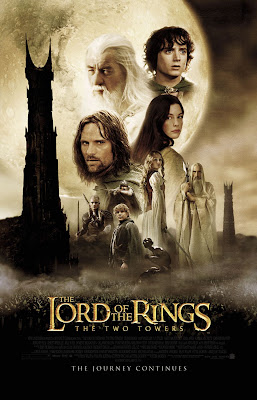 The Two Towers picks up immediately from the end of The Fellowship of the Ring and makes no concessions to newcomers: no 'story so far', no opening crawl and only a couple of brief flashbacks. Like so much with the Lord of the Rings movie trilogy this was a risk but one that paid off, with the film gaining immense financial and critical success.

The film has much to recommend it. As with the first movie, it benefits from an excellent cast that gets even better in this film with the likes of Bernard Hill, Miranda Otto, Karl Urban, Andy Serkis, David Wenham and Brad Dourif joining proceedings (viewers of the Extended Edition also get an early chance to meet the excellent John Noble as Denethor). Little criticism can be made of the cast and their evident enthusiasm for the project and this helps carry the film over the bumps in the road. As with the first movie, the effects are excellent and even better than before, with Weta Digital clearly emboldened with confidence after their work on the first film. The stand-out is Gollum, the most stunning digital creature creation to date (and so he remains). Between the animators, Andy Serkis's superb performance and the reactions of his co-stars, Gollum is brought to life and utterly convinces you he is there in the film.

The set design and miniature work is also excellent, with Edoras and particularly Helm's Deep being extraordinary creations. This informs the Battle of Helm's Deep, the stand-out battle of the trilogy and one of the most stunning engagements ever depicted on film. Jackson films the battle with dynamism and allows viewers to follow the geography and ebb and flow of the battle with clarity. He also holds back on the CGI as much as possible to focus on scenes of actors engaging in actual combat and some excellent use of miniatures (particularly when the Deeping-wall is breached). 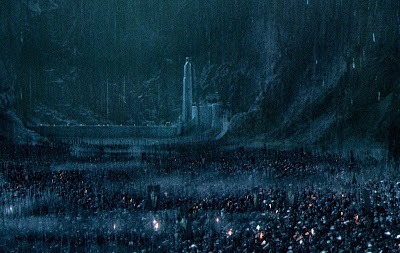 However, the film is not quite as successful as Fellowship. The biggest problem is inherited from the book, with the action split three ways between three different groups of characters. Tolkien decided that switching back and forth would be distracting, so he held back Frodo and Sam's storyline and did it all at once. Jackson is forced to switch back and forth and this is indeed not as successful as might be hoped, with carefully-built tension dissipating as we move to another storyline at a moment of tension. This problem is enhanced by the fact that a large chunk of Frodo and Sam's storyline has been held back for the third movie (where it does actually belong, chronologically), including the infamous cliffhanger ending. This forces Jackson and his team to introduce new material to fill the void. This results in the infamous 'weakening of Faramir' arc where Faramir first decides to give the Ring to his father and then changes his mind. The problem isn't so much the idea - giving Faramir more to do and more of an arc is not necessarily a bad idea in itself - but the logic. It is unconvincing that Faramir, having started to fall under the Ring's influence, would then back up and let Frodo go with it. The book approach (where Faramir avoids being influenced by it at all) is less 'dramatic' but makes more sense.

Merry and Pippin also suffer from the structural issues, though this is inherited from the book. Whilst Aragorn and company engage in political issues in Rohan and fight off Saruman's forces (twice in the movie) in epic battles, Merry and Pippin spend most of the film on the shoulders of a giant ambulatory tree talking about stuff for hours on end. The actors do their best, but it's hard to suppress a groan when the action cuts to another scene of Treebeard talking in extreme slow motion. It also doesn't help that the Entmoot lacks the grandeur of the book and their storyline then suffers a major believability collapse when the Ents seem to be unaware that Saruman was burning down their own forest (and Treebeard can then summon an entire Ent army to him instantly). It's only at the end, during the assault on Isengard, that their storyline really kicks into life. However, there's not much helping the interminable Elrond/Arwen scenes or the pointless 'Aragorn falls off a cliff' interlude.

Still, whilst the weaknesses niggle, the sheer scale of the movie, the splendid cast and effects and the epic impact of the battle for Helm's Deep cannot fail but impress.

The Lord of the Rings: The Two Towers (****) is not the instant classic its predecessor was, but remains a highly watchable and entertaining movie. It is available now in the UK (DVD, Blu-Ray), and USA (DVD, Blu-Ray).

Note on the Extended Edition: As with its predecessor, The Two Towers was re-issued as an Extended Edition a year after its original release. The Extended Edition adds approximately 40 minutes of new material to the movie. These include more scenes with Merry and Pippin (some of which fortunately do not involve riding around on Treebeard) and more material for Frodo, Sam, Gollum and Faramir. This, happily, has the effect of balancing out the three big storylines in the film and makes them feel more of equal weight. The highlight of the Extended Edition is a great flashback scene uniting Boromir, Faramir and Denethor on screen which helps explain their dysfunctional family dynamics much better than dialogue alone ever could. Despite the greater length, the Extended Edition of The Two Towers actually feels shorter by improving the pacing between the three storylines and adds some excellent new scenes. Accordingly, the Extended Edition (****½) is the definitive version of the film and is recommended over the cinematic cut. It is also available now in the UK (DVD, Blu-Ray) and USA (DVD, Blu-Ray).
Posted by Adam Whitehead at 11:01

Email ThisBlogThis!Share to TwitterShare to FacebookShare to Pinterest
Labels: j.r.r. tolkien, peter jackson, the lord of the rings, the two towers

In some ways, Adam, I think the extended edition of TTT is the best of the "six" movies. The extended Fellowship has pacing problems, the Return of the King has structural problems--but the extended TTT seems to get it right for me.

"The book approach (where Faramir avoids being influenced by it at all) is less 'dramatic' but makes more sense."

Most of the film's weaknesses seem to flow from Jackson choosing 'drama' over sense (the Ents unaware their trees were being cut down, Theoden refusing to go to war, Aragorn going missing ...)

I unfortunately have to admit that this one bored me nearly to death because of the Hobbit-Storylines ,-)

The Elrond-Arwen interlude was okay, actually. Given that *it actually happened in the books* -- well, was "alluded to" and COULD have happened "off screen".

My point is they didn't really invent a new Arwen motivation or alter the character; again, they felt they needed to introduce a "tough warrior princess" in part 1 by sending Arwen to the Ford....even though this book already *has* a warrior-princess, Eowyn, one of the first and best in fantasy literature.

I am of course dreading how they didn't integrate Arwen well into the third film, that's what I want kept in mind: in contrast, TTT dealt with her ACTUAL dilemma, of choosing love and mortality or immortality but losing her love. It wasn't that long, made logical sense, and it was a no-win dilemma; Elrond isn't "yelling" at Aragorn but presenting him with a hard truth. Meanwhile, it was good that they put in a flashforward (well, premonition that turned out to be true) of showing Arwen at Aragorn's grave when he dies of old age.

Yeah it had some problems inherent from the book jumping between character sets. But this is to be expected.

Yeah...I lament that they cut the Shelob sequence and pushed it into ROTK, given that *it is one of the biggest cliffhangers in fantasy literature*. That's not to instantly blame Jackson: yeah, it probably would have ruined the pacing.

But there's so much in the Frodo storyarc that they get wrong in ROTK; "we need to invent tension for why Frodo would make Sam stay behind" - thank GOD, though, that after numerous takes in which Frodo is *outright yelling* at Sam, the final one they used is to make him really spacey and half-there, to show he's blatantly being confused by the evil of the Ring and mentally unfocused/delirious. But we'll get to that in the next review.