The mid-21st Century. The world has been changed by an extraordinary event that has returned magic to the world and transformed millions of people into other races: elves, dwarves, orcs, trolls and other creatures of myth and legend. Technology and magic coexist in the shadow of vast skyscrapers, used by both the super-corporations that are supplanting the nation-states of the world and the shadowrunners, agents and mercenaries working for hire. When an old friend dies and sends a message from beyond the grave, you are called upon to run the shadows once more and find out what happened to him, and why. 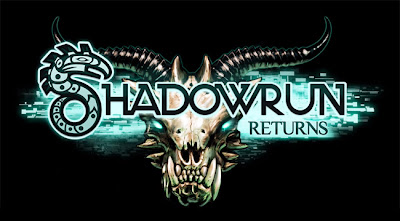 The story behind Shadowrun Returns is almost as interesting as the game itself. Not satisfied with the course of the Shadowrun RPG franchise on computers in recent years - particularly the poor action game from 2007 - the franchise's creator Jordan Weisman licenced the rights back to his world and set about funding a new, 'old-school' RPG set in the world. This would be a somewhat small-scale game that eschewed modern, cutting-edge (and very expensive-to-create) 3D graphics in favour of story, writing and a more stylised art style. It would also be made for fans and funded by them: Weisman raised just under $2 million for the game via Kickstarter. A number of other companies have followed suit, but Shadowrun Returns is the first major Kickstarter-funded CRPG to make it to release.

Shadowrun Returns consists of two elements. The first is the base game code and a built-in editor, with which you can make your own campaigns. The editor is quite powerful, and allows for more elaborate campaigns than the one that ships with the game. Thus, new campaigns or modded versions of the base one will be released in the coming weeks and months. Amongst the listed projects are a remake of the famous SNES CRPG from the early 1990s, for example. This will extend the game's longevity extensively.

The second element is Dead Man's Switch, which is the campaign that ships with the game. Limitations in budget and development time have restricted the scope and scale of this episode, but it's still more than 10 hours long and features a large number of locations and characters, as well as a huge amount of writing. Rather like the Neverwinter Nights base campaign, Dead Man's Switch can be seen as more of an extended demo of what the editor is capable of, although it is certainly better-written and more entertaining than that older game's base campaign.

You start off by creating a character and choosing your race and gender. There are no classes as such, but archetypes that automatically set you up as a warrior class (a 'street samurai') or a cyberhacker ('decker'), a user of drones ('rigger') or a magic-user ('mage'). You can ignore these and funnel points into different skill as you see fit, to create a combat-focused character who can also do a bit of hacking on the side or a rogue-like character who can drop the occasional healing spell. This allows for a great deal of variety in the way you play the game. Your skills are reflected in dialogue choices, some of which open up equipment and even quests that are otherwise unobtainable in the game. Other skills can be used to open up alternate routes through maps, allowing players to bypass combat.

Completing missions (or 'runs', in the game's parlance) results in the player gaining karma points, which can be used to improve their skills and learn new ones. Karma points are only gained for achieving objectives, not engaging in combat, which means the traditional RPG standby tactic of killing every enemy in sight (regardless of it being necessary or not) to help level up is unnecessary. This allows for a greater focus on roleplaying, conversations and characterisation than on simply wasting everything in sight. Combat, when it does happen, is pretty solid. It's a turn-based affair similar to the system used in last year's XCOM, allowing for the use of cover and a mix of movement, firing and going into overwatch to guard against newly-arriving enemy forces. You can use magic, guns, swords, drones and thrown weapons (like grenades) in combat, making it varied and entertaining. For extra variety, deckers (or characters with hacking skills) can sometimes use computer terminals to hack into and turn defences (like turrets) against enemy forces. 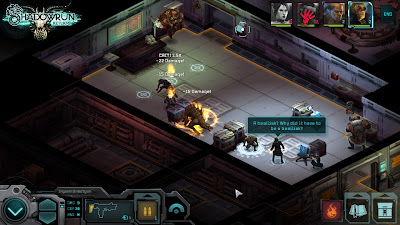 You can only create and consistently use one character, but you can hire additional help for runs. Some other characters may also volunteer to join you. Hired help require funds to pay for them, and along with a steady stream of weapon and armour upgrades (which, in a refreshing change, have to be bought from vendors rather than found on dead enemies) this makes for a more involved money-management system than in most roleplaying games. That swanky new shotgun or suit of body armour may be awesome, but buying it will also mean having to do the next run with only three people rather than four. Shadowrun Returns is a more thoughtful game than most recent RPGs when it comes to managing your resources and it's possible to make some serious mistakes, so be careful with the decisions you make.

The game's storyline is fairly basic (a colleague's murder automatically triggers a message from him asking you to investigate) but unfolds with a number of intelligent twists and turns. The writing is above average for this kind of game, helped by the fact that there's no expensive voice acting. This allows for much more dialogue than normal in these sort of games, which opens up a lot more information on character and worldbuilding. The bouncer at the nightclub/bar which serves as your HQ for most of the game is more fleshed-out and has more of a personality than many major characters in AAA RPGs, for example. Unfortunately, the story takes a turn for the bizarre rather later on and the introduction of a previously-unknown power group who helps you out for the final mission, whilst a treat for long-term Shadowrun fans, feels like an unsatisfying deus ex machina for newcomers to the franchise.

The good writing (a ropey ending notwithstanding), solid characterisation, satisfying combat and great artwork are let down by a few problems, however. The game sometimes gets confused about your characters' placement and it's not uncommon to click on an enemy to fire at them and instead send your character running towards them. Killing all of the enemies in a location often doesn't end combat as it should, forcing you to undertake the rest of the role-playing-based exploration of the area in turn-based mode, which is slow and labourious. The game is extremely linear, not allowing free exploration of already-reached areas (so make sure you've combed every single location for potential items of interest before moving on). More annoying - to the point of losing the game half a star - is the absence of a 'save anywhere' feature. The game saves on loading new areas, but not necessarily on area transitions. There is no quicksave or manual save option. The game's linearity doesn't make this too much of a problem until the final few areas, which are both extremely large and packed with combat encounters. Bad luck can force you back 15-20 minutes to the start of the area, which is frustrating and unnecessary.

Shadowrun Returns: Dead Man's Switch (****) belies its low budget with impressively stylised visuals, great combat and good writing. Seeing the return to the deeper and more interesting RPGs of a decade or so ago is satisfying, but the game confusingly also embraces some of the more irritating weaknesses of modern RPGs: an iffy ending, relentless linearity and checkpoint-based saves which are often badly placed. Overall, though, the game is a lot of fun, its low price, focus and intriguing setting overcoming some minor frustrations. The game is available on PC from Steam right now. A second official campaign, Berlin, is due for release at the end of the year.
Posted by Adam Whitehead at 12:03