In a (disappointingly cheap and cringe-inducing) live broadcast last night on BBC1, it was announced that Peter Capaldi will be playing the role of the Twelfth Doctor on Doctor Who, taking over from Matt Smith. Smith will bow out in this year's Christmas special (likely at the end), which will also mark Capaldi's first appearance in the role. 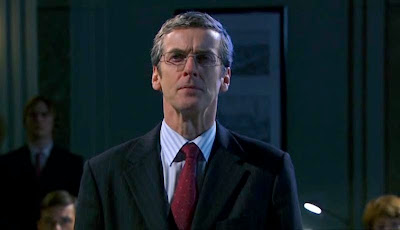 Capaldi was born in 1958 in Glasgow, Scotland, making him the second-oldest actor to play the role, as he is only a few months younger than William Hartnell was when he was cast as the First Doctor in 1963. He is also the third Scottish actor to play the role, after Sylvester McCoy and David Tennant. Capaldi began acting in the early 1980s, winning an early notable role in the film Local Hero (also starring Burt Lancaster). He alternated film work, such as appearing in Dangerous Liaisons (with Michelle Pfeiffer and John Malkovich) and Lair of the White Worm (with Hugh Grant), with working on TV in shows such as Minder and Rab C. Nesbitt. In 1994 Capaldi wrote and directed a 20-minute film, Franz Kafka's It's a Wonderful Life, which won the Academy Award for Best Short Film.

In 1996 Capaldi became known to genre fans when he was cast as the Angel Islington in Neil Gaiman's BBC mini-series Neverwhere. The same year he appeared in The Crow Road, an adaptation of Iain Banks's novel of the same name. Capaldi, a fan of Banks, has since recorded the audio book versions of a number of his novels.

In 2005 Capaldi was cast in his signature role, that of government spin doctor Malcolm Tucker, in the satirical series The Thick of It. Tucker, whose response to any crisis is a stream of foul-mouthed invective and cynicism, was allegedly loosely based on Tony Blair's spin doctor-in-chief, Alastair Campbell. Capaldi won a BAFTA Award for Best Comedy Performance and two British Comedy Awards for his performance. In 2009 he starred in the movie spin-off In the Loop, in which the team visit Washington DC in the middle of a major military crisis in the Middle East (the movie also features the late James Gandolfini as an American general). In 2007-08 Capaldi played the recurring role of Mark Jenkins on Skins, a father whose overbearing attempts to get his son to do well at college backfire badly.

In 2008 Capaldi played the role of Caecilius in The Fires of Pompeii, an episode of Doctor Who (by coincidence, the episode also featured Karen Gillan in a minor role before she was cast as companion Amy Pond two years later). The following year he gained significant critical acclaim for his performance as the haunted civil servant John Frobisher in the Torchwood mini-series, Children of Earth.

The casting of Capaldi is an interesting move. He's one of the highest-profile actors to be cast in the role (arguably only Paul McGann and Jon Pertwee were as well-known when they were cast) and going older was unexpected, with the feeling after Ecclestone, Tennant and Smith being that the BBC wanted younger, more attractive and energetic actors for the role than previously. Out of the names being touted, Capaldi was definitely the most interesting, however, and he will definitely bring a different tone to the series than in the last few years.

Also, with the revelation that a hitherto 'secret incarnation' of the Doctor previously existed (to be played by John Hurt in the 50th anniversary special in November), this makes Capaldi the Twelfth 'Doctor' but the thirteenth incarnation of this particular Time Lord. Long-term Doctor Who fans will know that Time Lords are supposedly only able to regenerate twelve times (and thus have thirteen incarnations) before dying for good. It remains to be seen if this plot point will be explored in the new series or simply ignored.

We will see the 50th anniversary special of Doctor Who on 23 November this year, followed by the Christmas special (featuring the regeneration) on Christmas Day. The next full season of Doctor Who is expected to air in late 2014.
Posted by Adam Whitehead at 11:26

I don't know that much about The Doctor, but he looks like he could make a decent one.

I just hope they don't force him to ditch his accent. I really can't think of Capaldi as anything other than a Scot (which is ironic, considering his name).

Well, at least he has a better hair style that the current one (though that could change). :)

I think that the writers will use River giving the Doctor her remaining regenerations in "Let's Kill Hitler" as a way to save his life as the reasoning behind the Doctor presumably having additional regenerations. That is, if they explain it at all.

Capaldi is an excellent actor but I think his turn as the Doctor will have little impact as long as Steven Moffat is still churning out his rubbish scripts and incomprehensible plots filled with irritating scenes that make no sense whatsoever but, like Hollywood blockbusters, are there because they look 'cool.' Wolverine outrunning a nuclear blast anyone?

If you've seen all of The Thick of It, you'll know that the real problem isn't the speed of Capaldi's running, but just how ridiculously stupid he looks doing it.

I don't know what it is, but Capaldi is one of the world's most ungainly runners. I think it may be that he keeps his legs too straight? It's his one flaw as an otherwise immaculate acting genius (or, at least, world-class seriously good and versatile actor).

So I predict we'll only see him run on camera in comical situations.

When's the Valeyard going to make an appearance then?