Star Trek: The Next Generation entered its fourth season riding the crest of a wave. Despite the extremely difficult circumstances it had been written and filmed under, the third season had been given a near-unanimously positive critical reception and the Best of Both Worlds cliffhanger had become a major TV event of the year. The production team thus started the fourth season with confidence and even a bit of swagger to their step and this translated into assured and confident episodes hitting the air. 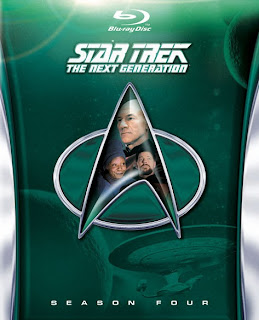 One of the most noticeable changes in the fourth season is the great embracing of continuity. The fourth season episodes bring back Data's evil brother Lore and address the ongoing Klingon story arc begun in Sins of the Father in the third season. Worf becomes a father, Wesley Crusher departs for the Academy and LaForge comes face-to-face with the real woman about who he's constructed a holodeck fantasy. Lt. Barclay, Vash and Q return, and the events of an episode that no-one can remember, Yesterday's Enterprise, have unexpected major consequences as the season draws to a conclusion. Major new forces also appear, most notably the race known as the Cardassians who will go on to have a massive impact on the Trek universe in future seasons and in the Deep Space Nine spin-off show. The fourth season feels like more part of an interconnected whole rather than 26 random stories thrown together and this works very well.

This isn't to say that every episode is a home run. The Best of Both Worlds, Part II actually resolves the Borg threat in a manner that makes sense but the story is a little too big for the episode and doesn't quite pay off the promises of the Season 3 finale. Suddenly Human has Picard disobeying orders from Starfleet with no consequence, which is odd. Remember Me is terrible (disappointing for a rare Dr. Crusher-centric episode). Devil's Due is played for laughs and doesn't work. Clues is an inferior remake of a much better Red Dwarf episode. Galaxy's Child sets up a great scene where LaForge is called out for some inappropriate behaviour towards a woman but he - rather childishly - blames her for it and gets away with it. Data's behaviour in In Theory is rather implausible.

But balanced against that we have the Klingon/Worf arc in Reunion and Redemption (and to a lesser extent in Family, Data's Day and The Mind's Eye) which is excellent throughout. There's Family's treatment of family life and Picard's backstory, which is well-acted by all involved. First Contact's brave experiment of showing the whole episode from the aliens' POV works extremely well. Brothers opens with a great hijacking storyline and ends with a striking confrontation between Brent Spiner, Brent Spiner and Brent Spiner which the actor pulls off with skill. Qpid has some great laughs (though not much else). Final Mission has some of the most spectacular location shooting the series ever did, and manages to (briefly) make the audience regret that Wesley is leaving. The Wounded expands on O'Brien's character a lot and paves the way for the entirety of Deep Space Nine. The Drumhead is an awesome episode about people using the fear of terrorism and sabotage to justify the draconian crushing of human rights and free speech (something even more relevant today than when the episode aired). The Mind's Eye is a great riff on The Manchurian Candidate. 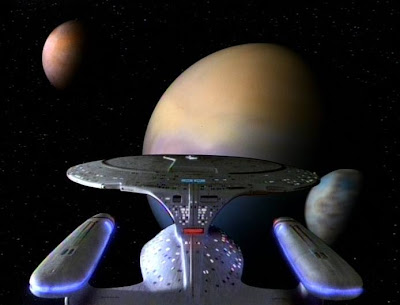 From the original SD DVD, the Enterprise approaching Peliar Zel II in The Host. 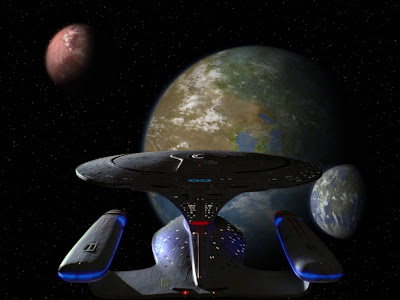 The same shot from the blu-ray, complete with remastered model visuals and newly-created planets and moons.

So whilst the fourth season doesn't quite hit the heights of the third (nothing here challenges Yesterday's Enterprise or The Best of Both Worlds in quality) it's still a highly entertaining collection of 26 episodes, with even the weakest episodes usually having scenes to recommend them. The regular cast are on top form and bolstered by some excellent guest stars (special mention must be made of Jean Simmons in The Drumhead and a returning Andreas Katsulas in Future Imperfect). There's a definite improvement in the quality of the effects for this season as well.

For this HD re-release of the season, every episode has been re-assembled from scratch from the original film stock, with every visual effect in the season recreated from the source materials (or, when they were unavailable, new CGI). As with the previous seasons, this has the happy side-effect of eliminating all greenscreen artifacts and 'halos' around models and superimposed characters, and allows for much greater detail in effects shots to become visible. Some effects that were originally quite ropey - such as Deanne Troi's dream-trip in Night Terrors - now look utterly fantastic and challenge modern effects work. The replacement of the generic original planets with more detailed CGI versions also continues and hugely improves the look of the show (Pelia Zel II in The Host looks particularly impressive). In a few cases effects that people have been moaning about for years - like the distinctly underwhelming explosion of the Borg cube in Best of Both Worlds Part II - have been redone entirely to look a lot better. The only major problem in the season is the terrible CGI for the space creature in Galaxy's Child, which looks amateurish and out of keeping with the rest of the series. With the rest of the effects looking absolutely stunning, there is no excuse for this.

The fourth season of Star Trek: The Next Generation (****½) is not the show at its best, but it is certainly highly entertaining and, with episodes like The Drumhead, thought-provoking. It is available now in the UK and USA.
Posted by Adam Whitehead at 14:20