In less than two weeks, Creative Assembly and Sega will release Total War: Rome II, the eighth game in the acclaimed Total War series and the sequel to 2004's Rome: Total War. 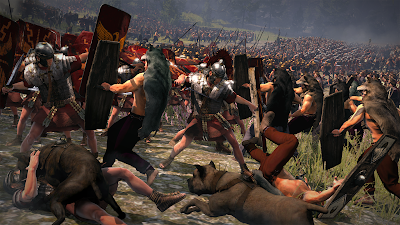 Roman and native forces engage in battle in Germania.

As with the other Total War games, Rome II will mix large-scale, turn-based strategic gameplay with a (pauseable) real-time tactical battle engine. Using the map you recruit and deploy armies and navies, build new structures, expand cities and manage diplomatic and economic matters. When one of your armies comes into contact with an enemy force, combat results. The game then switches to a map in which you directly control your army in battle. The focus in these games is on realistic tactics and unit formations, with a wide range of units to control from skirmishers to cavalry and archers. The same rules apply to naval combat, with you deploying fleets packed with troops and able to engage other fleets in battle and undertake boarding actions. For the first in the history of the series, however, the game will also allow combined-arms battles, with navies and armies fighting on the same coastal maps. 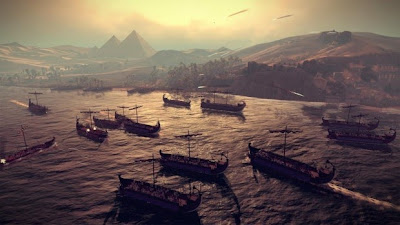 A naval engagement off the coast of Egypt.

Rome II also allows you to play as different factions. As well as Rome, you can play as Carthage, Macedon, Britannia (the Iceni), Gaul (the Arverni), Germania (the Suebi), Parthia or Egypt. A free expansion (available on release day) adds Pontus, whilst a month or so later another free update will add the Seleucid Empire. Three of the Greek city-states - Athens, Epirus and Sparta - will also be available to play as a paid expansion on release day, although this will be included free for those who pre-order the game. The game will also feature dozens of non-playable minor factions, many of them with unique forces, for you to defeat and conquer as you try to spread your empire across Europe, North Africa and the Middle East. 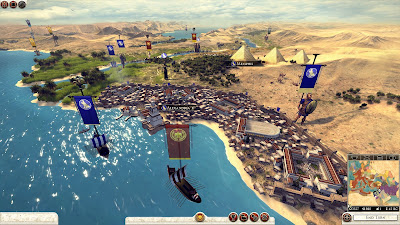 The strategic map showing the deployment of forces around Alexandria.

Available exclusively for PC, Total War: Rome II is the most graphically-impressive-looking game in existence. However, Creative Assembly claim that they have optimised the game so it will work on any machine that can run their previous game, Shogun II, without sacrificing visual quality.

For myself, I was a huge fan of the original Rome: Total War and Medieval II (released in 2006) but not so much of the more recent games in the series. But this is certainly looking hugely impressive, and will be the first Total War game I get on release day since Medieval II. Here's hoping it can live up to its immense promise.

Total War: Rome II will be released on 3 September 2013. It is available to pre-order now on Steam (though those without fast broadband might want to be forewarned that the game will be a colossal 35GB download, and maybe prefer to get a boxed copy for a faster install).
Posted by Adam Whitehead at 15:42

I enjoyed Shogun 2, but it had it's issues. The original Rome is one of the finest PC games ever made, I worked on the Barbarian Invasion ex pack when I was at Activision briefly before we sold the license to Sega mid-project. I still play mods for it, Total Realism and so forth, it's still a great game. I am jonesing for this game so badly, and praying my machine can run it, I was able to run Shogun 2, but load times were an issue, I've since the cheapest upgrades I can, a solid state drive, slight gfx card upgrade and 4 gigs RAM instead of 2, I just hope it'll be enough.

Hmm, I actually enjoyed the last three products in the Total War series (though I wish they had a playable Colonial America in Empire instead of a few battle missions!). :)

Btw, do you know if you still have to send diplomats running around Europe on diplomatic missions?

Y'know, I've not bought a computer game since the Viking Invasion add-on to the first Medieval: Total War game, but this really has me tempted.