In a small mountain town in a remote part of France, the dead start returning. Camille, a 15-year-old schoolgirl killed in a coach accident, returns home to find her twin sister is now four years older and her parents are separated. Simon, a musician who cannot remember how he died ten years ago, returns to discover his fiancee and daughter are living with another man. Serge is a serial killer, himself murdered, but now alive again and eager to resume his crimes. One of Serge's would-be victims, traumatised for years by the incident, finds a little boy who is also one of the returned, and must look after him whilst her own life falls apart. None of the returned know why or how they have come back...but it is merely the first sign that something much bigger and more dangerous is happening. 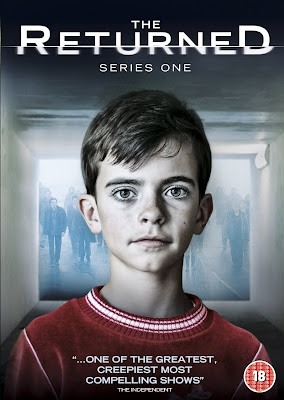 The Returned (Les Revenants in its original French) is a gripping, slow-burning drama series which is based around a simple premise: what if the dead come back to life? Not as zombies or ghosts, but living, breathing human beings with no memory of what happened to them and no explanation available for how this has happened? The reactions of families, loved ones and friends is mixed and varied: some treat the returned as horrific freaks, others try to adjust to the reality of the situation and others (including a local, canny religious leader) see it as a sign from God. The returned themselves are bemused and confused by the situation, but - in a possible clue to what's happening - all seem motivated by unfinished business from their former lives.

At the same time, the show develops other mysteries. The water level at the local dam is dropping, to the alarm of its staff. A previous dam on the same site collapsed in 1977, flooding a neighbouring village and killing more than a hundred people. Does this have something to do with what's going on? And how is the water reappearing in random locations in the area, such as at the local power station?

The Returned is keen on giving out the mysteries, but not on providing grand, over-arcing answers to everything (with at least three seasons planned and only airing at two-year intervals, we may be in for a wait for some answers). Instead, the show prefers to pose a question and then develops it over the course of several episodes. We get answers, but these may be complicated by other factors, or lead to fresh questions. Sometimes a single flashback or a line of dialogue may suddenly connect several elements together and lead to moments of revelation. The series is small in scale for its first half or so, but then becomes more epic in later episodes when contact with the outside world is cut off by a power failure. This late development kicks the series into a higher gear and introduces an extremely tangible sense of threat and menace to proceedings that carries the show through to a powerful cliffhanger ending.

The series is extremely character-focused, and both the writing and acting is superb throughout. The show has a strong focus on younger characters, such as Camille and her twin sister Lena (and the idea of twins separated and aged differently is an extremely powerful and disturbing one, handled well), and the actresses (Yara Pilartz and Jenna Thiam respectively) absolutely sell the idea of them being siblings and caught up in extraordinary events. 'Victor', the young boy adopted by the traumatised nurse Julie, seems to be at the heart of many of the mysteries in the series and is played with at times disturbing intensity by Swann Nambotin, whose thousand-mile stare makes the skin crawl. Flashbacks to his life before show a completely different, more emotional and 'normal' boy, and Nambotin's ability to switch between the two modes is phenomenal. Céline Sallette is also extraordinary as the damaged Julie, a character in denial about how badly her near-murder has destroyed her life until her encounter with Victor allows her to rediscover her humanity. Put like that, it sounds trite, but Sallette's performance (and that of Alix Poisson as Julie's former lover, Laure, desperately trying to reconnect with her) powerfully sells it.

The rest of the cast is also excellent, with the series' ability to use the big mysteries to illuminate the more human character moments being inspired. In this regard, as well as others, there's a little bit of Lost in the show's DNA, though the show is a bit keener in giving out answers to questions in the first few episodes. However, the show does occasionally resort to the same cheap tricks Lost used: characters sometimes completely fail to communicate with one another and will almost deliberately refuse to ask the questions any sane human being would in that circumstance in the name of tension. I can also see a question of who gets to control the town's supply of firearms might become a big question in the second season (as it was in the second season of Lost, somewhat tiresomely).


Still, the show benefits from sharper writing and better acting than its American forebear and the mysteries are different enough to raise more interesting themes and questions. The tone of the show is also very different, being darker and far more tense: David Lynch and Twin Peaks feel like more of an influence in that regard. The cinematography is also stunning, with the beautiful scenery offset by a decision to film daylight scenes only around dusk, resulting in a desaturated colour palette that adds to the creepy atmosphere. Backing everything up superbly is the haunting minimalist soundtrack by Glaswegian post-rockers Mogwai, which complements the visuals perfectly.


Season 1 of The Returned (****½) will be released on an English-subbed DVD in the UK on 9 September. Unfortunately, despite being shot and shown in HD, no English-language Blu-Ray release is currently listed. The DVD is also not for sale in the United States, though that might change after release. Season 2 will be shown in France in late 2014.
Posted by Adam Whitehead at 14:13

Fascinating. The premise sounds a bit like "The 4400," only without aliens. Well, I'm assuming no aliens, anyway. But it certainly sounds interesting enough for me to want to watch. I'll have to keep an eye out for this show. Thanks for the recommendation; I'm always on the lookout for new good things to try!

I wouldn't hold my breath for a US release under that name. ABC has a series called "The Returned" with a very similar premise (this one based on an as yet unpublished novel by Jason Mott) that is set to debut this fall. Similar to the issues with the British version of Life on Mars being largely unavailable on this side of the pond b/c of the god-awful US version.

BBC Life on Mars was awesome. But really loving The Returned! I will wait for season 2!

Where was this series filmed? Anyone know?

Haute-Savoie in eastern France, mostly in and around Annecy. The dam is the Barrage de Tignes.