As long-term readers may recall, back in 2007 Bantam Books decided to drop Paul Kearney's nautical fantasy series The Sea-Beggars after two books, citing disappointing sales. Kearney was picked up by Solaris who published a new trilogy (the excellent Macht series) and reprinted his earlier, classic Monarchies of God series. The expectation was that, in time, Solaris would also be able to both reprint and complete The Sea-Beggars. 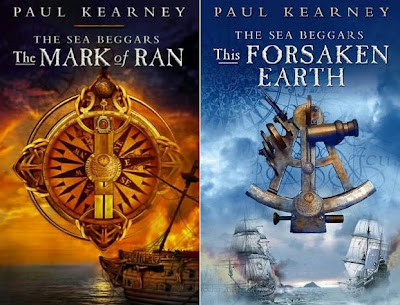 In March 2011 it was announced that this would indeed be the case: Solaris would reprint the two existing books, The Mark of Ran and This Forsaken Earth, in an omnibus complete with the brand-new third and concluding volume, provisionally entitled Storm of the Dead. To make this possible, the Bantam editions had to go out of print and Bantam had to agree to give the rights back to the author.

Unfortunately, since then there has been radio silence on the matter. It can now be confirmed that the Sea-Beggars omnibus is on indefinite hold, and may not appear at all. This is due to additional contractual and legal wrangling. Whilst Bantam UK gave up the rights as planned, Bantam Spectra in the USA refused. A check of Amazon.com reveals that the two existing Sea-Beggars books are still in-print and selling in the United States, which is presumably why Bantam Spectra have decided to hold onto the rights. 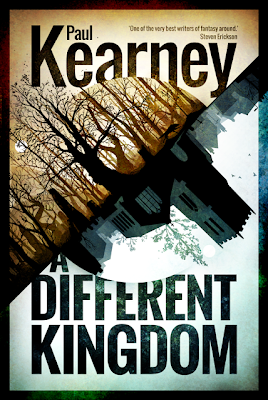 If the books are still selling well enough in the USA for Bantam to want to hold onto them, this would theoretically suggest that they might be interested in publishing the third and concluding volume as a stand-alone novel. However, this is apparently not the case. If the books are not selling well enough to warrant Bantam publishing a third volume, then it is unclear why they would want to hold onto the rights to prevent the series being completed elsewhere. If the series is selling well enough to warrant hanging onto the rights, then it is unclear why Bantam would not be interested in publishing a third volume as well. As it stands, it appears that the fans who have been waiting seven years for a conclusion to this series will have to keep waiting due to the inscrutable machinations of publishing houses.

On the bright side, Solaris are reprinting Paul's first three, stand-alone novels starting in January. Here's an art blog where they talk about the process of the creating the splendid cover art to A Different Kingdom. We may also get some news on new material next year as well.
Posted by Adam Whitehead at 09:51

Email ThisBlogThis!Share to TwitterShare to FacebookShare to Pinterest
Labels: no seriously wtf, paul kearney, sea beggars, solaris books, storm of the dead, the mark of ran, this forsaken earth, wtf

I did wonder what was happening with the Sea Beggars books--thanks Adam!

So do we actually have to start a campaign asking people not to buy the existing books if they ever want to see the last? Seems like Bantam are being rather unreasonable here, with the readers losing out because of it.

Well that sucks.. Kearney must be super frustrated with this process, the book is already done and he just can't get it published

Bantam dumped Kearney because they thought he couldn't sell enough.

He goes to Solaris and proves them wrong.

Bantam are therefore upset with both Kearney and Solaris, so in a fit of childishness Bantam decide to screw Kearney by refusing to publish the third volume, and screw Solaris by not giving up the rights.

OK, maybe it's not Bantam per se, but some manager with enough clout who will look dumb if proven wrong!

Things that make you go WT(ever-loving)F!!

Some people just suck. They're probably even a bit proud of their overall suckitude.

Oh well. Hopefully the success of the Macht series, these reprints, and a new project will keep Paul thinking positive. But ... DAMN!

I may have come late to this party but this have been a burning frustration for me for years. I loved the Monarchies of God series, one of my favorite fantasy series. Then comes along Sea-Beggars and I thought for sure this was going to be one of my favorite series, period, when it was finished. Book 3, hello? book 3, hello? I remember reading at the time that Bantam said the reason they dropped him was because Sea Beggars wasn't selling, which was not the case at all. Whatever and then Solaris was going to publish it when the rights ran out. Hurray! Finally! But no...it is so infuriating to find a (not so) new (now) author that you love and then not be able to read the book he wrote because of some stuffed shirts wearing cranky pants at a publisher. Oh I love the Macht series and I'm digging Solaris is re-printing his older stuff here in the States. Still, I'd give up all the new Erikson and Abercrombie to have the third Sea Beggars.

Surely he can just write in on the net? I love the Sea Beggars and have just read the series again for the third time, without the last book Storm of the Dead. Dying to know what happens.

And publishers wonder why so many authors have turned to self-publishing their own stories as POD and Ebooks.
The last laugh will be on them.
We don't need you any more.
So long, and thanks for all the fish.

I agree, I'd love to get my hands on the 3rd book. Paul's website and forum is shut down now so there's no real way of contacting him unfortunately.

Agreed, nice to see you on the blog cub, still looking for a release of this book, my collection will never be complete without it.